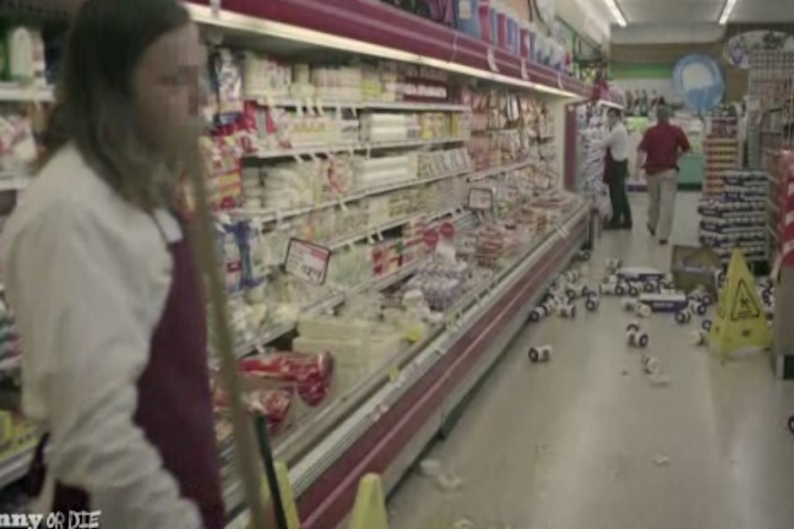 Dinosaur Jr. protect those guilty of underage drinking and teenage hooliganism in their new video for “Watch the Corners” (off their forthcoming “guitar grinding” LP I Bet on the Sky) by pixelating their faces like they’re the subjects of a heinous local news investigation. The clip was helmed by the Director Brothers and stars the Tim of Tim and Eric Awesome Show, Great Job! as a father whose daughter gets a job at a grocery store and becomes interested in a goofy skateboard-riding stock dude. As the teen girl spies his antics — stealing a bottle of liquor, juggling produce — she starts falling for him. (Meanwhile, when she’s home, she watches an equally censored Dinosaur Jr. on TV, as J Mascis creaks and croaks about “no forgiveness,” which is what her dad is probably feeling.) She hangs out with the bad boy, hooks up with him, and gets a little pixilated schmutz on her face, which sets her dad into a fury. The romance, and her slide into delinquency, continues until slacker dude flirts with some other clerk, sending Tim’s daughter into a depression, prompting him to do some hilarious thrashing about in the supermarket’s dairy aisle during Mascis’ gloriously extended guitar solo.

The song, which sounds very Dinosaur Jr. (in the best way possible — they’re like the AC/DCs of alt-rock), dips into an acoustic section in the middle — a move inspired, in part, by some heavy metal icons. “I always liked that since I was a kid, from like, Black Sabbath,” Mascis recently told Rolling Stone. “Suddenly they go into acoustic, back into electric — I guess I’ve always been into that.”

I Bet on the Sky is due out September 18. Up until then, the trio will be on tour (view the full dates below). The September 8 date has a bill that features bassist Lou Barlow’s other band, the recently reactivated Sebadoh.