Circle Jerks Tell Tales About Being Jerks in New Doc

Over the course of three decades, hardcore punks Circle Jerks released five LPs of vitriolic, smarmy salvos like “Back Up Against a Wall” and “Wild in the Streets,” made a cameo in Sid and Nancy, and even recorded a tune with ’80s teen queen Debbie Gibson. Now, in a new documentary coming out on DVD on September 25, an all-star cast led by the band’s longtime leader Keith Morris recounts the group’s unprecedented history, which began when Morris left his post as the mouthpiece for Black Flag. The film, titled My Career as a Jerk, was directed by David Markey (1991: The Year Punk Broke, The Slog Movie) and contains rare live footage and interviews with members Greg Hetson, Lucky Leher, Earl Liberty, and Zander Schloss, as well as Dinosaur Jr’s J. Mascis, Morris’ eventual Black Flag replacement Henry Rollins, Minor Threat and Bad Religion’s Brian Baker and more.

“We had no management, we had no plan as to what we wanted to do,” recalls Morris, who now fronts the band Off!, in the trailer for the movie, viewable below (via Tiny Mix Tapes). “Things were getting faster, things were getting shorter, but you also have to throw into the mix, the fact things were getting crazier.” Of course, just when things get interesting, that’s just about when the trailer ends, so we’ll have to wait to find out just what Morris’ definition of “crazier” is.

Markey, on the other hand, is simple pleased to have captured an important part of punk history on film. “I was at many of these shows, and let me tell you, there wasn’t a tighter band in Los Angeles at the time,” he said in a statement. “Making this film reminded me just how truly great they were.” 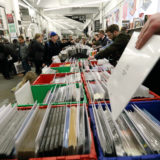