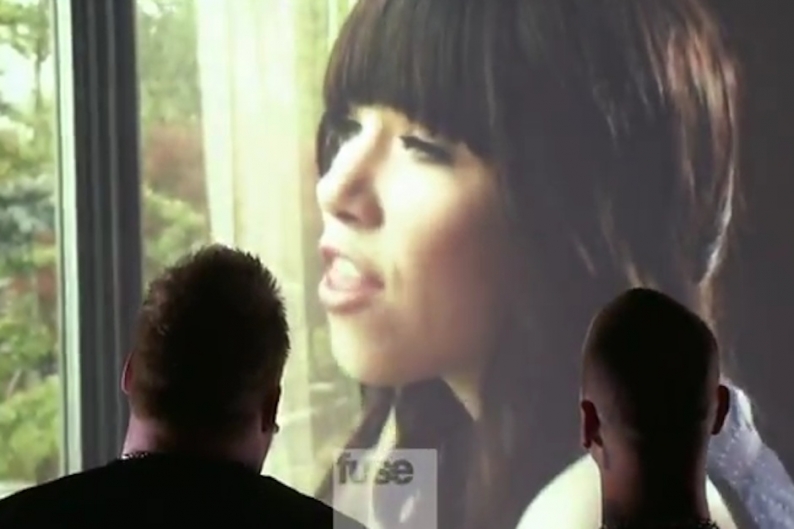 SPIN pals Insane Clown Posse got some shine earlier this week when a clip of Violent J and Shaggy 2 Dope watching, and commenting, on the video for Carly Rae Jepsen’s smash hit “Call Me Maybe” went online. The best part? It’s when the Michigan horror-core champs’ lose it over the surprise phone-number swap at the end. Something this weird was guaranteed to get on a lot of people’s radars. Including Jepsen’s.

“I haven’t watched it yet, but I think one of my friends posted it on Facebook,” says the Canadian pop star, whose second album, Kiss, is due out September 18. She’s as curious as anyone. “Is it good?” she asked SPIN. Oh, it is. When told about J and Shaggy’s response to her video’s twist ending, Jepsen deferred credit. “[The ending] was [MC-comedian] Tim [DeLaGhetto’s] idea,” she said, laughing. “Every week a new remake or spoof [of the ending] pops up. I get a total kick out of it.”

As Justin Bieber, who offered his own impromptu “Call Me” cover, can likely attest, spoofing the song is a lot easier than singing it. “She’s gonna kill me for saying this,” says Jepsen, “but my personal assistant and I will be in the car together, and the radio will come on and you’ll just hear her wailing away. I’m like, ‘Almost’ [Laughs].” Jepsen also has good vibes for Bieber. “He really sparked the whole ‘Call Me Maybe’ video-spree,” she says. “It was a game-changer for me.”

For ICP, too. Which pretty much means the video can become no more ubiquitous. We think.