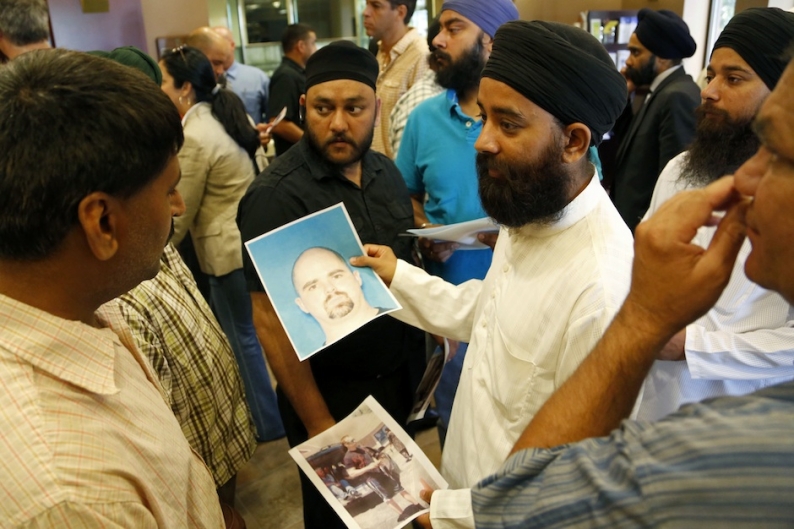 The man accused of killing six people at a Sikh temple in Wisconsin on Sunday morning had been the leader of a white-power hardcore punk band, the Southern Poverty Law Center has uncovered.

Wade Michael Page, named in media reports as the alleged killer, was the vocalist and lead guitarist for a racist band called End Apathy, according to the civil rights watchdog. In a May 2010 interview, Wade said he started the Nashville, North Carolina-based band in 2005 “to figure out what it would take to actually accomplish positive results in society and what is holding us back.”

“A lot of what I realized at the time was that if we could figure out how to end people’s apathetic ways it would be the start towards moving forward,” Wade is quoted as saying. “Of course after that it requires discipline, strict discipline, to stay the course in our sick society.” Wade also said his sound “is mainly based on the mix of my influences, and that is ’80s punk, metal, and oi.” The interview did not go into the topic of violence.

“Rick 56″ of record label Label 56, which released a split 7-inch by End Apathy and is designated by the Southern Poverty Law Center as a white supremacist website, conducted the interview for a blog called Uprise Direct. According to the Milwaukee Journal Sentinel, both Uprise Direct and the Label 56 cite were offering End Apathy’s shirt, record, and sticker combos as recently as July.

A description of End Apathy’s music archived from the Label 56 website makes no explicit mention of Wade’s politics. In part, it reads, “I am very happy to be working with Wade and End Apathy as they have a great old school hardcore/punk sound to them and remind me a lot of the old California skate bands of the ’80s.” The band’s apparent MySpace page lists influences including “Sabbath, Slayer, Maiden, DRI, COC, RKL, GWAR, GBH, Aggresion, Misfits, Bad Religion, Sick Pleasure, Exploited, Dayglow Abortions, Crumbsuckers, Cryptic Slaughter, Mike Watt, Innocent Addiction, Soak, BumKon, Burnt Fase, etc…” Five of the bands tracks are still posted on MySpace, including “Self Destruct.”

The Southern Poverty Law Center notes that, according to the interview, Page joined the white-power music scene after moving from Colorado in 2000. The civil rights watchdog says concerts he mentions attending in Georgia, North Carolina, West Virginia and Colorado were “white power concerts.” Page also said he played at various points in the bands Youngland, Celtic Warrior, Max Resist, Intimidation One, Aggressive Force, and Blue Eyed Devils, all of which the Law Center describes as “hate rock” bands. End Apathy’s other members, according to the interview, were bassist “Brent” and drummer “Ozzie”; they had played in the bands Definite Hate and 13 Knots.

According to the Journal Sentinel, a suburban Milwaukee police officer shot and killed Page on Sunday morning after Page shot another officer.

UPDATE: Label 56 has issued a statement reading, “Label 56 is very sorry to hear about the tragedy in Wisconsin and our thoughts are with the families and friends of those who are affected. We have worked hard over the years to promote a positive image and have posted many articles encouraging people to take a positive path in life, to abstain from drugs, alcohol, and just general behavior that can affect ones life negatively. Likewise we have never sought attention by using ‘shock value’/ symbols and ideology that are generally labeled as such. With that being said, all images and products related to End Apathy have been removed from our site. We do not wish to profit from this tragedy financially or with publicity. In closing please do not take what Wade did as honorable or respectable and please do not think we are all like that.”

Das Racist’s Heems posted a series of tweets in reaction to the shootings, which Egotrip compiled into a blog post today. “my parents go to a gurdwara like the one in wisconsin every day. cant imagine someone bringing such hatred to such a calm place,” he wrote. “What number of American flags must the Sikh community buy and prominently display to have the basic American right of being left alone?”