It includes practically every song from 'Swing Lo Magellan' 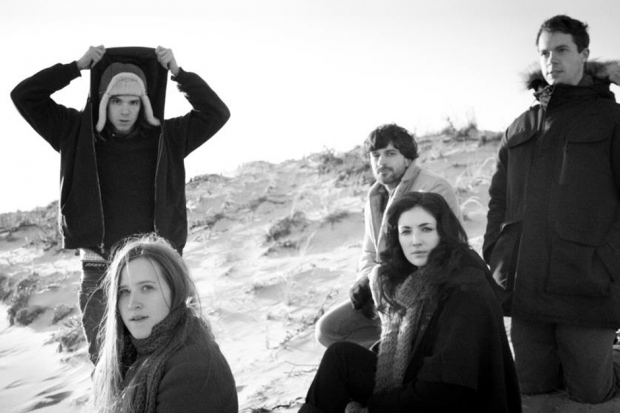 Brooklyn art-rock auteurs Dirty Projectors teamed up with NYC live music moguls Bowery Presents for a brief, 24-hour YouTube broadcast of last night’s set at the Music Hall of Williamsburg. Dave Longstreth and crew try their hardest to craft complicated, heady rock and watching them perform live affords the same kind of satisfaction as seeing a gymnast flawlessly run through unthinkable stunts — so if you’re not gonna catch ‘em on this tour, this replay is a great opportunity.

Performing against a triptych of cuneiform projections (inspired by the band’s square vinyl “tablet” single “Gun Has No Trigger”), the group performed all but one song from their latest (and recently SPIN Essential’d release, Swing Lo Magellan. Live, the Magellan songs retain all of the crisp detail of the studio recordings; a feat considering the album’s exposed, disarmingly clean production. Since they last played our SPIN show, Olga Bell took over on vocals and keys from Wye Oak’s Jenn Wasner (who was sitting in for longtime member Angel Deradoorian), yet over 70 minutes of exhausting vocal work and the ensemble didn’t miss a beat, proof of their fastidious musicianship and mastery over the new, meticulous compositions.

The full show will be up on YouTube until 9 a.m. tomorrow morning. In this case, stillness is not the move.