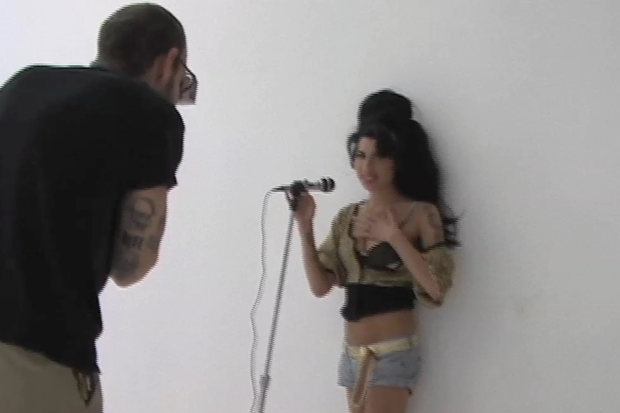 There was a moment when magazines starting shooting B-roll video of their cover shoots, to help give a little glimpse of a a major artist engaged in the secret, thrilling world of standing around in photo studios while lights get moved around. Our Amy Winehouse shoot with Terry Richardson in May 2007 was a notable exception. Winehouse’s soon-to-be husband, the currently incarcerated Blake Fielder-Civil, who’d previously worked as a PA on film and video sets, was eager to man the camera himself, and it’s safe to say that as an interviewer and videographer, he is able to yield responses out of his subject that no one else would have been able to.

Look back at Amy Winehouse’s memorable milestones in photos.

For all of the couple’s grave problems, which would spiral tragically in the months and years that followed, they come off like sloppy teenagers in full thrush of newly rekindled love here — making out, carving sweet nothings into skin with broken glass, rattling off rooster-inspired cock jokes. The impossibly warm smile that Winehouse breaks into as the video camera catches her mid-shot with Richardson has nothing to do with the camera itself and everything to do with who’s holding it. None of this is meant to minimize the couple’s problems; merely to capture one of the few moments of genuine bliss before a decidedly unhappy ending.