An hour of unhedged, mean-girl rap from Ms. Bank$ 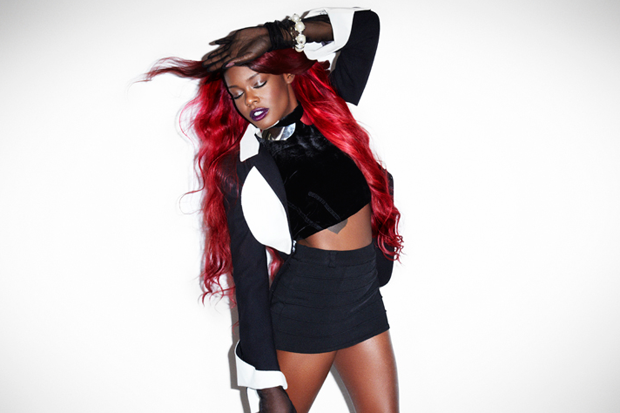 Azealia Banks is embattled, and I love it. When I spoke with her in February, she brandished her newly-signed record deal with Universal like a weapon aimed at cred-obsessed hipsters: “Now that I’ve signed my deal it’s kinda like I don’t need the fucking Internet…You don’t have to be on an indie label and eat ramen and make an album on some bullshit-ass mic in some dirty basement.” Her noble, hilarious, though surely unwise Twitter attacks on white-girl rap idiots like Kreayshawn and Iggy Azealea, as well as Iggy’s inexplicable benefactor, T.I., along with the candor displayed when she clowned the snooze-worthy beats of XL Recordings’ Richard Russell in numerous interviews, makes a pretty good case for her not giving much of a fuck. The wildly cheeky attitude displayed on Twitter and in interviews, though, stands in contrast to her music, which often expresses a similar sentiment through calculated performance and curated production. “212” is fun, but its wide appeal has a lot to do with the way that every vocal turn and “cunt” utterance is perfectly placed. At just four songs, her EP from May, 1991 seemed hedged.

With Fantasea, an hour of rap-riffing experiments and weird, indulgent diversions — like dusty jazz interludes and hilarious audio of Banks and a friend making jokes about hip-hop’s latest buzz word “ratchet” — her music finally feels as off-the-cuff as her Twitter account. The compellingly chaotic nature of <>Fantasea wisely reasserts Banks’ stance, not as of-the-moment thinkpiece bait, but as a big talent still trying stuff out. For the most part, she continues to rap over hip, quirky instrumentals from folks like Machinedrum and even so-uncool-they’re-cool-again-’90s-rave-ragers the Prodigy. But frequently, Banks sings on Fantasea, and though that’s something she exhibited on “212,” it’s especially charming here because your ears are assaulted by so many rhymes, and then, she shifts into a soft-voiced croon that belies the bad-ass bleating.

The thrill of Fantasea comes from the build-up of track after track after track, so picking out a few highlights doesn’t make a lot of sense. But “Esta Noche” is worth investigating because it unpacks what makes Banks different from her buzzing peers. The song details her stealing an unsatisfied guy from his girlfriend, with little delicacy or panache. It’s the anti-“Call Your Girlfriend.” But Banks’ ability to cut through the self-justification is refreshing. That it comes before a disarmingly sincere “thank you” skit, dedicated to her fans and label pals, makes the song’s gleeful cruelty even more compelling. Azealia Banks is a tough, quick-witted, unflappable archetype — Roxanne Shante as one of the Heathers, Missy Elliot playing one of the Mean Girls. She’s also a remarkably compelling technician.