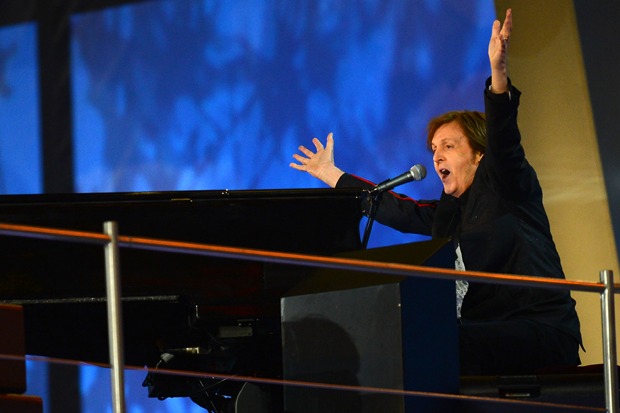 Negotiating a fair price for something special is delicate work. The people who organized the performances at the opening of this year’s London Olympics are masters, though, and each “na-na-na” of Paul McCartney’s “Hey Jude” last Friday cost them mere pence. That’s because artistic director Danny Boyle & Co. paid Sir Paul — and allegedly the ceremony’s other performers, including Arctic Monkeys, Dizzee Rascal, Underworld, Mike Oldfield and others — a single pound note, or about US $1.57, for their services.

The thing is, Macca and the others had originally agreed to play for free. In order to make their performance contracts legally binding, though, the organizers had to offer up a nominal fee. Scottish R&B singer Emeli Sandé, who performed the hymn “Abide With Me,” commented to the London Evening Standard, “I got paid £1 for my work…I signed the contract myself. Mind you, I haven’t received anything yet!” Then she added, “When I do, though, that £1 will be truly special.”

Like Sandé, the other performers, including McCartney, thought the experience was worth it. “It was a trip and very exciting,” the former Beatle commented in the same article. “It was a great opening ceremony.” And rapper Dizzee Rascal seems as though he was overwhelmed by the experience. “The energy in the stadium was unreal,” he told the Standard. “These opportunities only come by once in a lifetime and to be part of it was an unforgettable experience…I’ve loved being part of the build-up to the event, running with the torch, performing at Hyde Park and getting involved with [Rascal’s song] ‘Scream’ being an official Olympic track — hopefully it will inspire the team to win gold.”