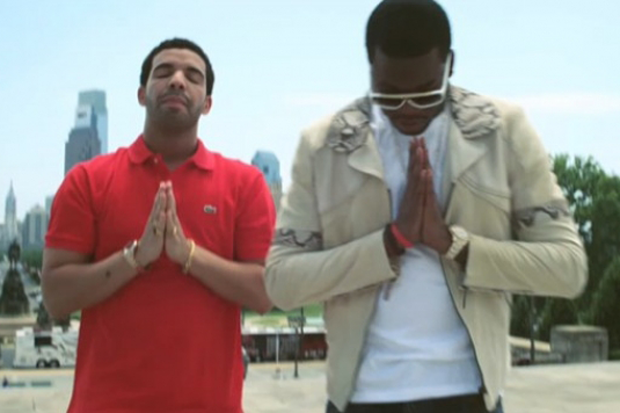 The tension between the sacred and profane has been a crucial element in American popular music at least since gospel gave way to soul. It’s probably the last thing you think of when you hear Meek Mill’s breezily exuberant Dreamchasers 2 mixtape highlight “Amen,” a soul-sampling ode to the earthly gifts that He or She has so graciously bestowed on the Philadelphia rapper and his friends Drake and Jeremih. As MTV points out, though, a Philly pastor is publicly calling for a boycott of Mill’s records over the track’s use of religious imagery. With Rick Ross’s God Forgives, I Don’t on the way, Frank Ocean’s late-night TV performance of “Bad Religion” still burned into our brains, and Pusha T’s “Exodus 23:1″ recently reigniting a hip-hop rivalry, this one looks like a losing battle for the Almighty. Thank whatever is holy, then, that the song’s just-posted video sticks to mere mortal concerns, starting with the aftermath of an awesome party and then following Mill and Drizzy through footage from their Club Paradise tour. Waka Flocka, J. Cole, French Montana, and others make cameos. One thought: If rappers aren’t allowed to refer to religion anymore, does this mean athletes have to stop bringing it up all the time, too?

See why Mill’s upcoming Dreams & Nightmares is one of SPIN’s 25 Summer Albums You Gotta Hear.