Based on recent events, it seems that if you were a successful band in the 1990s, you have two options in 2012: reunite and make a comeback record, or fight each other relentlessly for the use of whatever’s left of your legacy. Apparently Live has decided on both. While four of the original members reunited last year, they’re now suing the band’s ex-frontman, Ed Kowalczyk, who they all but kicked out of the group three years ago, for attempting to associate the band’s un-Googlable name with his current solo project. Like many of these kinds of lawsuits, this one is rather tricky, so stay with us (via the Hollywood Reporter).

Three of four members of Live’s original lineup (Patrick Dahlheimer, Chad Gracey, and Chad Taylor) are suing the fourth, Kowalczyk, via Action Front Limited, the company/label they co-own and launched to protect the band’s trademarks and to release Live records (the only one they’ve released via Action Front is a 2007 bootleg rarities collection called Radiant Sea). Kowalczyk, the suit claims, is causing “confusion” and misleading fans to believe he’s still a part of the band, by calling his album Alive and by billing solo performances as “Ed Kowalczyk of Live.”

Kowalczyk (as the band’s Wikipedia page makes especially clear) has not been a part of the band since 2009, when its members went on hiatus to pursue other projects, which consisted of Kowalczyk doing his solo project while the rest of the band continued making music together, adding members of Candlebox and a new band name, the Gracious Few. A few months after the hiatus began, the members made it clear to fans that the move was specifically to split from the frontman, who had, at a Dutch festival that summer, asked for a $100,000 bonus for simply being the lead singer. By mid-2010, they filed a lawsuit (not to be confused with the current one), which attempted to regain publishing rights to the band’s material — Kowalczyk was the only arbiter for the band’s publishing company, Black Coffee. 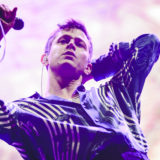 This most recent lawsuit the band is pursuing through Action Front Ltd. is now seeking “an injunction plus $2 million in statutory damages for claims of trademark infringement, false designation of origin, and trademark dilution” against their ex-lead singer, who was replaced by Chris Shinn when the band reunited earlier this year. By the way, the four band members have been playing together since junior high, which pretty much mandates that this will not be a strictly professional fight.

As THR points out, the precedents set for this kind of battle between bands and their ousted members tend to side with trademark-holders; the Beach Boys’ example back in 2008 led to an ugly $4 million case that had members bickering over who could use their trademarks and eventually settled out of court. Additionally, as SPIN has reported previously, the members of ’90s metal quartet Kyuss are still in the middle of a similar legal battle; ex-members Josh Homme and Scott Reeder are suing the other two members for reforming and performing Kyuss songs as Kyuss Lives!.