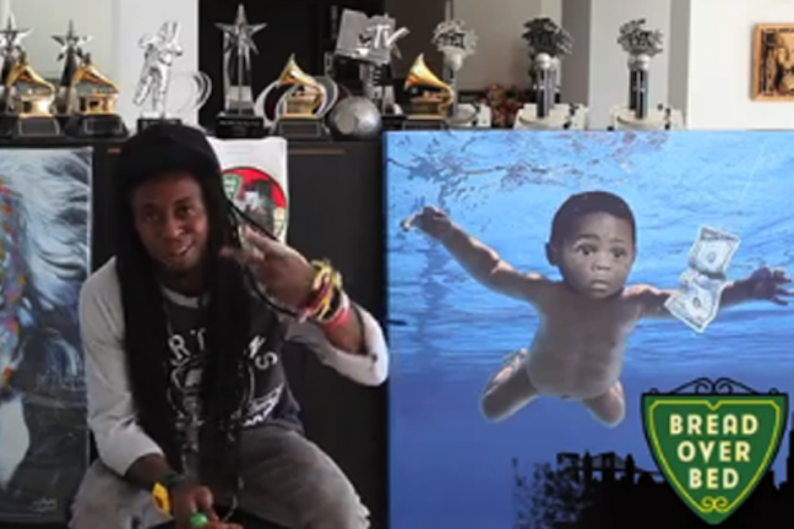 Lil Wayne’s preoccupation with Nirvana runs deep. He’s long cited Nevermind as a big influence on his decision to pursue music. Last fall as the album was celebrating its 20th anniversary, he sat with MTV to chat about its significance (his interviewer, Sway, even sagely mentioned the song “I Smell Teen Spirit”). Earlier that year, brilliantly ridiculous Canadian pundit Narduwar gifted Wayne a Nirvana poster book at their interview.

The latest manifestation of Weezy’s longtime fascination with Kurt Cobain and Co. has arrived on BreadOverBed.com, the website the MC launched with his buddy DJ Scoob Doo featuring “exclusive footage” meant to document “all the sacrifice” that comes along with Wayne’s success. As AllHipHop notes, Wayne (or somebody helping him deal with his success) has posted a three-minute video featuring Tunechi sitting (skateboard underfoot, obviously) between a painted portrait of Albert Einstein and interestingly altered cover art for Nirvana’s Nevermind explaining, that the phrase “Bread Over Bed” is his “lifestyle,” “[not] a saying, [not] a movement.

But… what is he trying to tell us by Photoshopping his baby photo — as originally seen on the cover of Tha Carter III — over the face of Spencer Elden, the 20-year-old whose legacy SPIN just won’t let him forget? Is he pulling a Hov and breaking news like a new album cover (I Am Not a Human Being II, perhaps)? Or is he just reiterating how much he seriously loves Nirvana, you guys?