Lady Gaga’s Social Network Is Open to the Public

Now even the most casual Little Monster can post Gaga-related Reddit cartoons and chat with Argentinian superfans on LittleMonsters.com 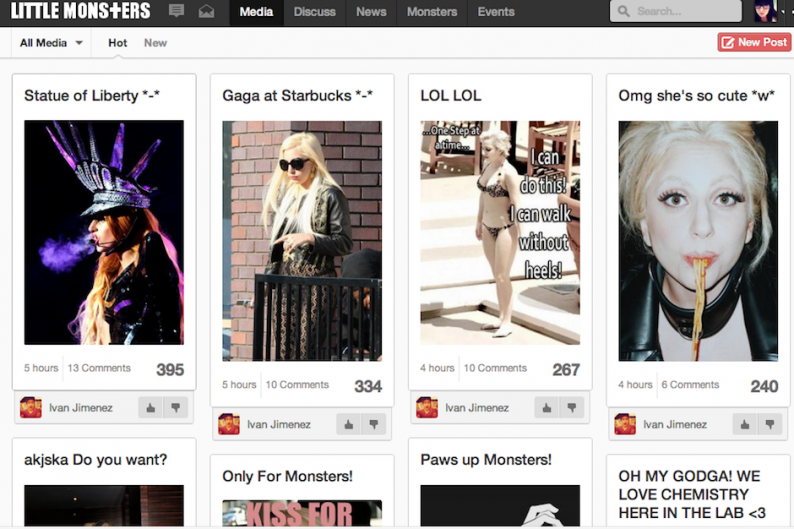 In May, Lady Gaga’s crew must’ve become aware that her insanely large Twitter following was about to equal 5.2 percent of Facebook’s entire user base, because that month, almost exactly 30 days before Gaga hit 26 million followers, they announced the launch of Little Monsters, a Pinterest-meets-Reddit social networking site for only the most dedicated Gaga fans. Initially it was an invite-only beta launch, but today, ABC reports, the site went public.

In a meta (yet more or less customary at this point) twist, fans can sign into Gaga’s social network with their other social network accounts (Facebook and/or Twitter) or simply relinquish their e-mail addresses in order to access what equates to both an AOL chatroom circa 1997 (there are multiple rooms that fans can either join or create their own, many of which are currently country-specific) anda place to store all of those particularly fanboyish/fangirlish memes you’ve made out of weird Gaga shots and Reddit cartoons. Fans can also buy tickets to official events (for now, just concerts), see Gaga-related news posts from around the Internet (there are a few from GLAAD and Gizmodo, but most from fan sites and Tumblr blogs), and post on a good ol’ fashioned message board or six. Posts can get up-voted or down-voted, too, so there’s a little bit of passive-aggressive online bullying involved — it’s safe to say, though, that Mother Monster expects her Little Monsters to be on their best behavior.

In case this sounds familiar, Gaga isn’t the first artist to launch her own superfan networking site. Insane Clown Posse actually beat her to it earlier this year; Juggalobook.com had amassed more than 10,000 users as of March. There’s decidedly an equal amount of nudity and costumes involved with LittleMonsters.com as with Juggalobook, however.

Gaga, meanwhile, just arrived back in Los Angeles from her eastern Asia and Australia tours; after arriving at LAX angry and pantless, she was discovered to be simply in need of some fine American megachain coffee. (Considering her most recent new song, we’re glad the distraught episode was temporary.)