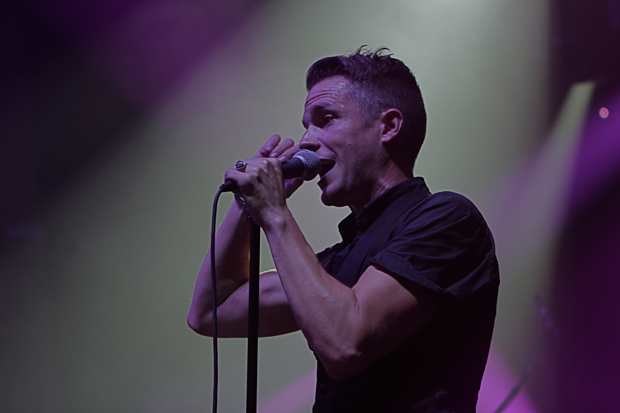 Hundreds of fans waited in mismanaged lines in the rain for the Killers’ Monday night show in New York — their first concert in a giant city on their first American tour in three years. But enduring the precipitation just felt like part of the script — everything about the Las Vegas band’s live show says “we made it,” “we’re in one piece,” “it’s the first day of the rest of our lives.” Let no bro go unhugged, no fist unpumped.

The long-sold-out set took off with “Runaways,” the lead single from the band’s upcoming fourth album Battle Born, and one of frontman Brandon Flowers’ most extravagant experiments in Springsteen-meets-ecstatic-dance-rock to date. Drenched in relentless strobe lights, the Killers headed straight into Hot Fuss hit “Somebody Told Me,” ensuring a massive early sing-along that made the soaked crowd feel that much more accomplished. That first transition set up the evening’s flawless momentum — other than a few breaks where Flowers expressed his awe for New York (“fuckin’ New York City!”) and thanked fans for their dedication, the Killers did not screw around, plowing from one song to the next so the heaving floor didn’t miss a beat. The band members themselves were often visible only in silhouette behind bright floods of light, barely a distraction from the wall of sound.

After a mild breather for “Smile Like You Mean It,” a.k.a. the song most likely to appear in a John Hughes film if John Hughes were still making films, the big-budget prom vibe continued with a twinkly starry-sky backdrop for “Spaceman” from 2008’s Day and Age. But it was “This Is Your Life” that really focused the Killers’ magic — during a song about elusive dreams and not having the answers, the crowd was nothing but swaying arms and just-won-the-big-game optimism.

The Killers introduced several more songs from the new album, including another disco-Springsteen rocker “Miss Atomic Bomb” (a reference to an actual 1957 beauty pageant winner whose mushroom-cloud-dress-clad image was used in Las Vegas tourism campaigns), and “Flesh and Bone” (“What are you afraid of? What are you made of?”). But they also looked back on some of their post-punky influences, with a cover of Joy Division’s “Shadowplay,” and a slowed-down verse/chorus interlude of Blondie’s “Dreaming.” This mellow mini-cover seemed more than anything like a pulse-regulating meditation for Flowers, coming after aspirational anthem “Read My Mind” and before everyone-go-apeshit mega-hit “Mr. Brightside.”

Near-hysteria is all that defines the high points of a show that’s essentially one continuous climax; these included the aforementioned “Mr. Brightside,” main set closer “All These Things That I’ve Done” (with oft-lifted refrain “I’ve got soul, but I’m not a soldier”) and final encore “When You Were Young,” one of the band’s most successful and unabashedly Springsteen-kindled singles.

That song more than any other epitomizes the Killers’ secret, especially in a shared live setting — evoking nostalgia not just for youth, but for 10 minutes ago. Remember that time we came in from the downpour and everything was going to be just awesome?

Setlist:
“Runaways”
“Somebody Told Me”
“Smile Like You Mean It”
“Spaceman”
“This Is Your Life”
“Miss Atomic Bomb”
“For Reasons Unknown”
“Bling (Confession of a King)”
“Shadowplay” (Joy Division cover)
“Human”
“A Dustland Fairytale”
“Read My Mind”
“Dreaming” (abbreviated Blondie cover)
“Mr. Brightside”
“All These Things That I’ve Done”

Encore:
“Here On Out”
“Flesh and Bone”
“Jenny Was a Friend of Mine”
“When You Were Young”

Evie Nagy
Tags: the killers, We Were There