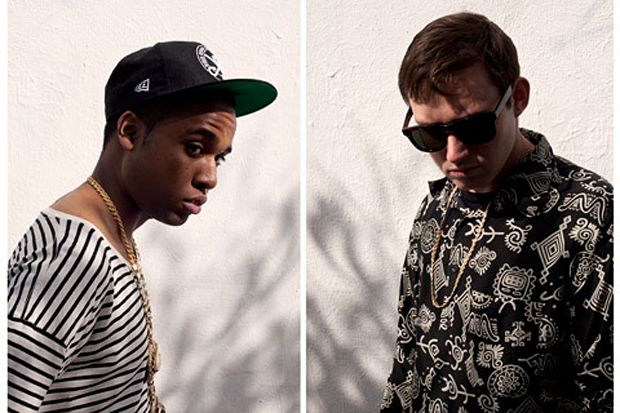 With an EP being released jointly on July 24 by Warp and LuckyMe, TNGHT are already guaranteed to drawn attention from electronic music types — U.K. DJ Oneman recently name-checked them in an interview with SPIN’s Control Voltage blog. With a Waka Flocka Flame remix arriving earlier this week, the duo of Hudson Mohawke and Lunice should be poised to turn some hip-hop heads, as well. On the basis of their TNGHT EP’s massive-sounding “Higher Ground,” though — a head-smacking barrage of chopped-up vocals, dive-bombing horns, and martial handclaps — the Scottish and Canadian music-makers ought to have an appeal that extends far beyond specific genre niches. “Reaching for higher ground,” a chipmunk-pitched house diva stammers, and the music bludgeons you there. HudMo, whose biggest moment to date is his contribution to Kanye West’s G.O.O.D. Music cut “Mercy,” and Diplo affiliate Lunice, who was involved in arguably the noise-rock band Deerhunter’s most delicately pretty four minutes, have been up in the clouds since before “cloud rap” was a term applied to the atmospheric hip-hop of Clams Casino, Main Attrakionz, or Keyboard Kid 206. Would it be greedy to hope the lofty “Higher Ground” isn’t their peak?