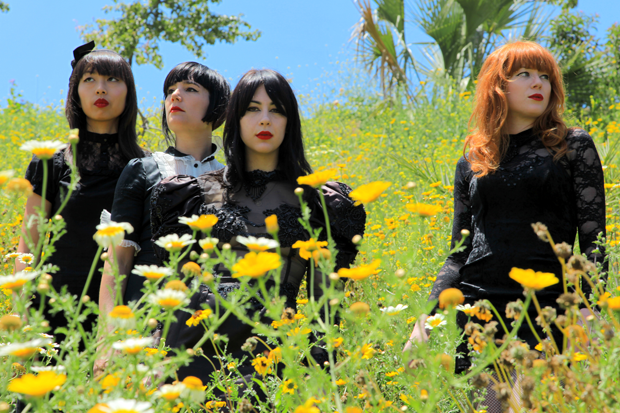 Romantic uncertainty has been a recurring worry across Dum Dum Girls’ two Sub Pop albums, last year’s Only in Dreams and 2010’s I Will Be. “Lord Knows,” the advance stream and penultimate track from the bicoastal group’s upcoming five-song End of Daze EP, comes across as a sublime effort to put those concerns to rest. Swaying beach-blanket pop with distant “Crimson and Clover” guitar strums and rumbling Phil Spector percussion, it’s a fitting successor to Only in Dreams slow jam “Coming Down”, only less Mazzy Star-ry. If that was the druggy comedown, this is the clear-eyed moment of reckoning: “Oh, boy, I can’t hurt you anymore,” frontwoman Dee Dee sings, in soft harmony, on the sticky chorus. Don’t expect a total lack of daze on Daze, however: The EP, which comes out on September 25, also includes a cover of the shambling first single by ’80s Scottish indie-poppers Strawberry Switchblade. And lord knows even “Lord Knows” is still plenty David Lynch-shrouded — it’ll be the best track to follow Dirty Beaches’ “Lord Knows Best” on your next moody playlist, like a morning embrace after a long, strange night. Doesn’t dawn look divine?