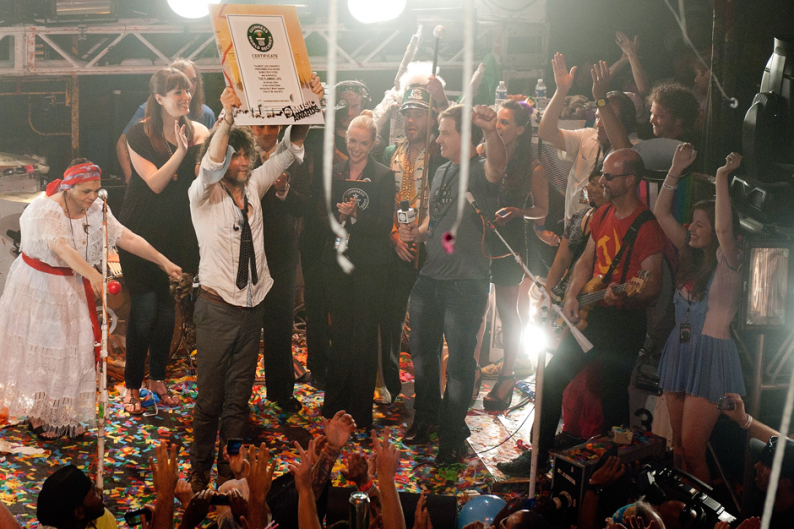 On the evening of June 28, Wayne Coyne was laying blissfully onstage amidst confetti at the House of Blues in New Orleans. Twenty-four hours earlier, he and his Flaming Lips bandmates had, in conjunction with MTV’s O Music Awards, started their effort to set the Guinness World Record for Most Concerts Played in multiple cities in a 24-hour period. With 20 minutes to spare, the band had broken Jay-Z’s record of seven shows in 24 hours, and to celebrate they were playing the equivalent of a victory lap, launching into “Race for the Prize.” Here’s how they claimed first place.

Show No. 1: Handy Park, Memphis, Tennessee, June 27, 5:04 p.m.
It’s summer in the South and Faust’s “It’s a Rainy Day, Sunshine Girl” is playing on the PA. Wayne Coyne is in a blue quilted ski jacket and furry bear gloves despite 90-plus-degree temperatures. An army of dancing Dorothys take their places onstage before the Flaming Lips start at 5:25 p.m. with a thundering, throbbing “Worm Mountain.” Despite the sweat stains on his mustard-colored trousers, Coyne insists, “When I’m in the middle of the Flaming Lips family, no I don’t get hot. I get energized.” 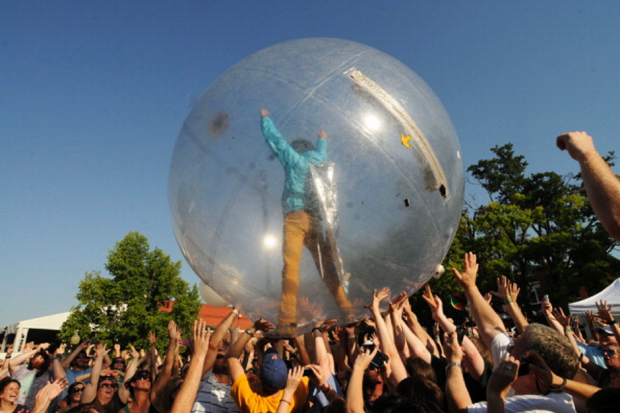 This is bonus time. The 24-hour tour officially starts around 6:30, at which point the band has to play at least 15 more minutes — the minimum length of a show by Guinness standards. Mike Janela and Amanda Mochan are the official Guinness minders, and both wear matching crisp, dark suits and clasp clipboards bearing the slogan “Officially Amazing” to their chests.

At 6:35, the Flaming Lips are on the Guinness clock and the 24-hour tour begins with “Girl You’re So Weird” from The Flaming Lips and Heady Fwends. They follow that with “It’s Summertime,” a Beach Boys-like song with glacial synthesizers and a lengthy, minimalist guitar solo. “Do You Realize??” closes the show at 6:58 with confetti cannons set on stun.

Show No. 2: Ground Zero Blues Club, Clarksdale, Mississippi, 9:14 p.m.
“This is going to determine if we can do this — getting on, getting off,” tour manager Bryan Barry says as the crew loads amps into this classic roadhouse. First indicators aren’t good as drummer Kliph Scurlock wanders around the stage, waiting for his turn to soundcheck. Guinness’s Mike Janela is in place on the side of the stage and Coyne explains to the audience that the band will play 15 to 17 minutes, then it will have to leave to have a shot at the record. There’s a police escort to help them get where they’re going, he says. “I feel very much like O.J. Simpson.”

At 9:30 p.m., Coyne signals to Janela to start the clock and they begin “2012 (You Must Be Upgraded)” with Hour of the Time Majesty 12, the Los Angeles-based band that played on the track from The Flaming Lips and Heady Fwends with Ke$ha and Biz Markie. Live, the song’s Bo Diddley beat is so heavy that Hour of the Time’s singer, Ashi Dala, dances over backwards.

All the shows on the tour are different, and Clarksdale’s says that streamers don’t make the man. Here the Flaming Lips are a kickass rock’n’roll band when they stomp through “Be My Head.” They close with a confetti-free, streamer-free “Do You Realize??” and then they’re off again. Because the show drifted a half-hour behind schedule, a planned stop at the Crossroads where Coyne planned to recount the story of Robert Johnson meeting the devil is scrapped.

Show No. 3: The Lyric, Oxford, Mississippi, 11:20 p.m.
The band’s bus, Endeavor, rolls up in front of the theater in Oxford Square, the center of Ole Miss social life. Coyne and an accompanying MTV crew attract so much attention that multi-instrumentalist Steven Drozd, bassist Michael Ivins, and members of the band’s team walk up with instruments in hand and go unnoticed when they ask where backstage is located. The mania in front continues inside where the crowd is on fire. When Coyne announces that they’ll only play 15 or so minutes, there are a few boos, but when he tells the story of swapping text messages with opener Grace Potter about their shared love of Led Zeppelin and that they’re going to do two Zeppelin songs, the crowd freaks out.

Twelve minutes after the band walked into the venue, they’re ready to play. Opener-designated fwend Grace Potter sees Janela standing motionless onstage and declares, “He’s turning me on.” She’s giddy, dancing and hugging Coyne as they sing Zep’s “The Song Remains the Same.”

“Grace and I will trade off on these hippie-ass vocals,” Coyne says, introducing an unspectacular version of the British rock legends’ “The Rain Song.” Then it’s “Do You Realize??” and back to the road, for the first time without having played a Heady Fwends song.

Show No. 4: Duling Hall, Jackson, Mississippi, 3:55 a.m.
If Clarksdale got the rock’n’roll show and Oxford got the Zeppelin show, Jackson got the trippy show. Three hundred or so people are still woozily upright when Coyne requests that “Jackson arise.” The crowd takes the news of the 16-to-17-minute set better than Oxford did, and the Lips start “Is David Bowie Dying?” with Alan Palomo of Neon Indian joining just as he does on The Flaming Lips and Heady Fwends. The musicians pair that song with a motoring cover of Bowie’s “Heroes” that has the crowd congratulating each other for still being there. A slower, haunted “Do You Realize??” and they’re off.

Show No. 5: Benny’s Boom Boom Room, Hattiesburg, Mississippi, 6:58 a.m.
Before the tour started, Coyne speculated that the route through the South was chosen to elicit some sort of confrontation between “the conservative, old-world America and the freaky, new-world Flaming Lips fans.” But he wasn’t worried about that possible conflict. “I don’t think the world’s much like this version of Easy Rider; that the freaks go driving through the South and the rednecks kill them.” Hattiesburg proves him right. The Lips are the circus, and it’s meaningful to residents that it came to town. When the tour was in the planning stages, there was talk of the band performing on the Boom Boom Room’s flat roof, but organizers concerned about the band’s safety nixed that. Instead, people are packed as tightly as they were in Clarksdale, but with the benefit of morning sun to start the sweating.

“Rarely,” Coyne says, “do we get a chance to say ‘good morning’ to our audiences: Good morning!” Amanda Moachan assumes Guinness oversight duties, and she starts the clock at 7:44. The Flaming Lips are joined by the least predictable fwend, Jackson Browne, for the least predictable cover of the tour, “These Days.” The band knew the song as it was performed by Nico on her debut album Chelsea Girl. Browne had to re-learn the song because he has since revised and shortened the composition he wrote when he was 16. He then does what he can with the Bon Iver parts of “Ashes in the Air” from Heady Fwends, but like much of the album, it’s late-night music and so at odds with the moment that it borders on magical anyway. 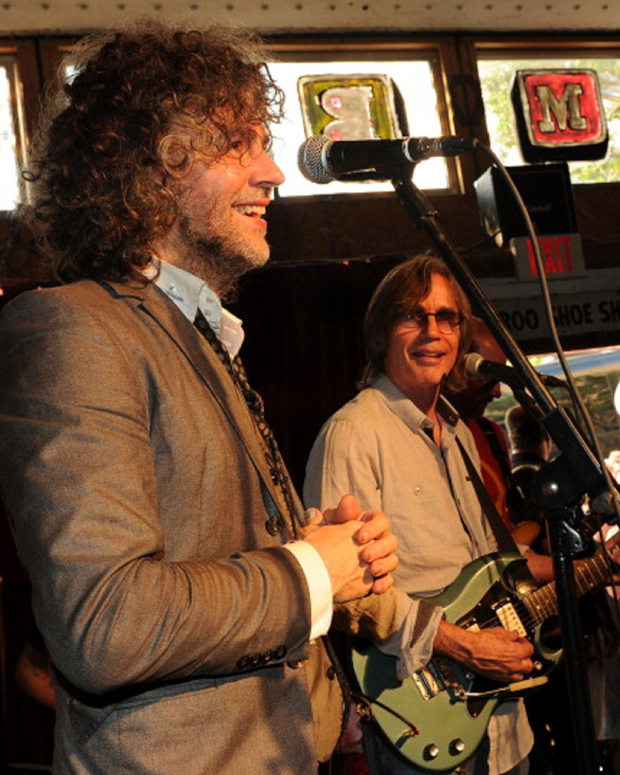 “If I were you, I’d go home and go to sleep,” Coyne says at 8:03 as he introduces “Do You Realize??” The half-sprint to the bus afterwards is interrupted by a woman who offers Browne an album jacket to sign. After he kindly obliges, she turns and hugs the first person she sees: a morning television news reporter covering the scene.

Show No. 6: Hard Rock Casino, Biloxi, Mississippi, 10:24 a.m.
If Hattiesburg was the most magical stop, Biloxi’s where shit got real again. The stage is outside with the bandmembers facing the shallow end of a pool with the Gulf of Mexico at their backs. Shades of MTV’s Spring Break: There are bikini girls dancing on the seawall.

At 10:50, MTV2 VJ Jim Shearer takes the stage to serve as hype man while sound issues are sorted out. His energy is very different from Coyne’s, and when Shearer offers the first discouraging word of the tour — that test drives of the tour failed because the buses broke down — Coyne defends Endeavor, saying, “We’ve got a good bus.” Despite the lengthy set-up, Shearer gives The Flaming Lips a long, high-powered introduction that Coyne deflates by stopping to bring Moachan to the front of the stage to start the show.

At 11:08, the Lips are underway with the second unreleased song of the tour, a moody space-rock song titled “You Lust,” which they perform with Phantogram. The jam is not quite as abstract as, say, the material from the band’s Christmas on Mars, but it’s closer to that than, say, The Soft Bulletin. A cover of The Police’s “Invisible Sun” also drones and pulses as if the Lips are doing what they can to gray the Gulf Coast skies. Coyne seemed to know it, and adds an unplanned reprise of the two-man version of “Race for the Prize.”

Press Conference, Endeavor, 11:34 a.m.
The press is ushered on to Endeavor, where Coyne addresses the recent Erykah Badu controversy. He says that things are cool between them, and that the drama was due to their different audiences. “I think I convinced her that it was a Flaming Lips video and not to worry about it,” Coyne says. “I think for a little while, she was not necessarily completely at ease with that, but she was like, ‘You’re right, Wayne. It’ll be fun.’ Obviously, we made the video, but then I believe when the reaction from her audience to her was so vicious, I wanted her to defend herself. She’s the only one that can do that. I knew the Flaming Lips audience [would] know that some of this is in fun and some of it is in her way of protecting her brand or whatever.” 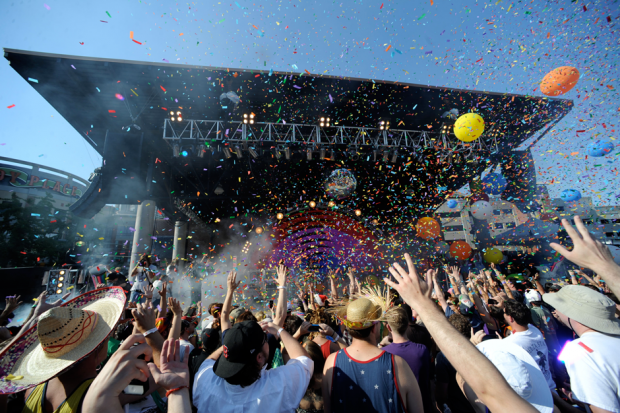 Show No. 7: The Varsity, Baton Rouge, Louisiana, 2:45 p.m.
At every tour stop so far, Coyne has begun by apologizing for having to play for so brief a time. But now, to save time, the band slams straight into a monstrous cover of King Crimson’s “21st Century Schizoid Man,” and then he explains what’s happening. They’re joined at this stop by Nashville band Linear Downfall, who stand in for Lightning Bolt on “I’m Working at NASA on Acid.” The two songs fulfill the 15-minute time requirement. Still, Coyne and Drozd finish with a stripped-down “Race for the Prize.” At 3:06, they’re done. The band has more than three-and-a-half hours to get to a stage only 83 miles away.

Show No. 8: House of Blues, New Orleans, Louisiana, 5:19 p.m.
Two blocks from the House of Blues, Endeavor drops off Coyne, Jackass daredevil Chris Pontius and Biloxi’s bikini girls. Coyne is delighted to see the Stooges Brass Band warming up on a street corner, and behind it, dancers with papier-mache heads and two small, rolling floats. This is Coyne’s victory parade. He pulls on his furry gloves and climbs on one float, leaving the other to the bikini girls. His gloves make it hard to handle Mardi Gras beads, but it’s the simplest fun the frontman has had in days.

At 5:48, the stage is set and barring an emergency, the Flaming Lips will get the record. Without explanation, they start “Do You Realize” at 5:56 and the confetti cannons are back in action. The New Orleans show is the one that fans at every stop had hoped to see — it’s an exhilarating celebration of the band and its fans. The set is front-loaded with hits: “She Don’t Use Jelly,” “The Yeah Yeah Yeah Song,” and after the record is broken, “Race for the Prize,” which is followed with a salvo of confetti and smoke. The show’s mood was lighter than at any of the stops and so was the music. “Worm Mountain” was less ominous, and after “What is the Light?” the Lips segued into “The Observer” and a lovely jam unlike few from the last 24 hours.