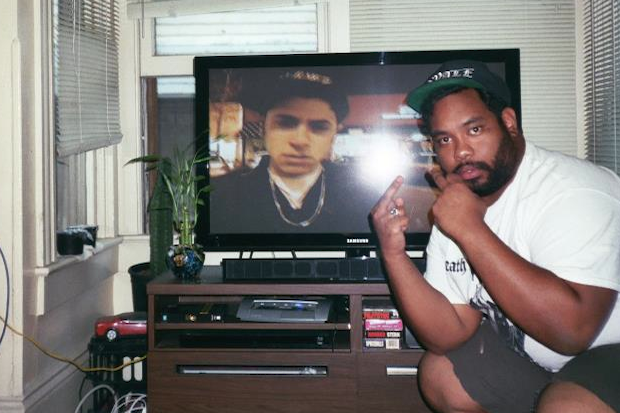 Last year, Antwon released the Fantasy Beds mixtape (featuring breakout track “Helicopter” and production from Clams Casino, Javelin, Salem), plus the album My Westside Horizon, a lo-fi, Quiet Storm-informed affair, produced entirely by his buddy, Bad Slorp (who has since changed his name to DJ Sex Play). But Antwon’s latest, End Of Earth, best displays his singular personality — an affable guy who might have one of rap’s biggest, best-sounding voices, which he usually focuses on goofy jokes and surprisingly sweet bedroom raps. But he’s also got a layered persona, bouncing between likable loverman (Biggie at his most open-hearted), and lonely, pissed-off punk, bleeding out break-up songs (like Biggie on “Suicidal Thoughts”).

That Biggie comparison isn’t only because Antwon happens to be a big dude with a rumbling voice. If Biggie had been gleefully chasing Mtume down the rabbit-hole of ’80s R&B throughout Ready to Die, it might’ve sounded something like End Of Earth. A bass-heavy, murky instrumental begins the album and then a hardcore-inflected doom-rap head-nodder about feeling alone and hating everybody, titled “Laugh Now,” bursts through; “Cold Sweat” is a down-in-it break-up song, produced by RPLDGHSTS, best known for their work with Cities Aviv (“Black Box” and “Fuckeverybodyhere”); “Diamonds And Pearls,” which shouts out girls like Slum Village’s “Selfish” (if it had been set in a single area code), goes back to the Quiet Storm swerve of My Westside Horizon. “Hidden Room” is an Italo-disco rap with Antwon smoothly chanting like Kano vocalist Glen White. And don’t miss “Still Sittin’ In Hell,” where Antwon talks marvelous shit over the top of a yammering beat from Big Baby Ghandhi.

Last week, we premiered the video for Antwon’s Pictureplane-produced hip-house throwback “Living Every Dream.” Now, here’s his the album, End Of Earth. It’s out on Thursday, but you can stream it exclusively at SPIN, below.