As rock’n’roll spread across the planet through the 1960s, rematerializing further and further from its origins in the American South, odds increased that its geographically far-flung practitioners inevitably would get it “wrong.” And with a couple decades still remaining on the tick-tick-ticking Cold War clock, a part of the world largely walled off by an Iron Curtain from Western distribution channels — where “Back in the U.S.S.R.” and Deep Purple and Zappa and Velvet Underground tapes had to slip through the black market like Levi’s — was destined to wind up with its own skewed way of doing things. In the ’80s, perestroika and subsequent communism-overthrowing insurrections tore down that wall, and U.S. ears finally got the chance to hear (then immediately forget) Zvuki Mu, Kino, Gorky Park, and Boris Grebenschikov. But as the Slavic diaspora expanded, home-grown Eastern and Central European and Balkan influences came with it, birthing new hybrids from Laibach’s quasi-fascist Slovenian industrial marches to Drudkh’s crypto-nationalist Ukrainian forest-folklore metal to O-Zone’s viral-videoed (and later T.I/Rihanna–sampled) Moldovan-Romanian numa numa disco. The eight albums below represent the rock end of the spectrum — but as rock goes, they’re a whole ‘nother world.

Various Artists
Russendisko (Trikont, 2003)
This German-released sampler brings together energetic tracks recorded by wild and crazy Soviet-associated performers dating back to the 1970s. It’s named for compiler Wladimir Kaminer’s 2000 short-story collection about being an exiled Russian in Germany (and for a regular DJ night he hosted in East Berlin with fellow compiler Yuriy Gurzhy), and many of its artists (Nogu Svelo, Leningrad, St. Petersburg Ska-Jazz Review) ride gravely guttural vocals atop an oompah undertow that may or may not qualify as a misapprehended stab at Jamaican riddim. Cuts from Leonid Soybelman and the amusingly named Leprikonsi (with the amusingly named “Chicks Don’t Fall in Love With Me”) almost could be blueprints for Gogol Bordello. Markscheider Kunst pulls off swinging Latin clave; Spitfire toss in Spike Jones-y sound effects; Gurzhy’s own band RotFront mix Falco-esque rapping into a cover of Kraftwerk’s “The Robots”; Amsterdam Klezmer Band, perhaps inadvertently, manage to polka “Who Stole the Keeshka” into their klezmer. And halfway through several of the selections, tempos suddenly speed into double-time.

Lady Pank
Drop Everything (MCA, 1985)
Their name sounds like an inversion of an earlier English-as-foreign-language crossover attempt, Japanese duo Pink Lady of late ’70s TV variety-show infamy. But apparently the “Pank” is pronounced “punk” — at least that’s how Dick Clark said it when he interviewed them through a translator on American Bandstand — and these new-wave-haircut Poles have put out 20-plus albums in 30-plus years. Drop Everything, though, was their only one sung in English and the only one with a video, featuring pink Sherman tanks and way too many link sausages (including one in a dachshund’s mouth) that made it into rotation on MTV. That’d be the awesome fashion-model dis “Minus Zero” — “She thinks she’s ooh la la! / But she’s just la-di-da!” — possibly the pinnacle of their goofball punk meets white-reggae hybrid: Robert Christgau impossibly pegged it as the Vibrators crossed with Men at Work. There are also plenty of tips taken from the Police — always more influential outside the English-speaking world than within it: Check out the chord progressions in “Hero,” and the “Voices Inside My Head” polyrhythms of the instrumental “Disturbance of the Order.”

Plastic People of the Universe
1997 (Globus International, 1997)
Born in the immediate wake of the Warsaw Pact invasion of Czechoslovakia in 1968 to suppress Prague Spring reforms, then driven underground to play secret gigs and make surreptitious recordings of radical desperation, later enduring the incarceration of several members, Prague’s Plastic People might be the bravest, most literally revolutionary band in the history of rock — former Czech president Václav Havel even wrote lyrics for them. Their albums, starting with the legendary mid-’70s fan-dubbed bootleg Egon Bondy’s Happy Hearts Club Banned and including their 1991 major-label album City of Hysteria under the name Půlnoc, have never been easy to find. 1997 is a live album, made when then-President Havel urged them to reunite, and it’s one intense document of resilience: faster, more forceful, and understandably less despairing than the Velvets-infused Euro-rock they started out playing. Almost metal, in fact, with grooves out of “I Wanna Be Your Dog” and Rocket from the Tombs’ “30 Seconds Over Tokyo” (“Zácpa”) and Steppen-wolf biker-rock (“Vrátí Se”), and free-jazz sax noise and wah-wah push harking back to the Stooges’ Funhouse. The last track, “Magické Noci,” is one of the more foreboding, but ends with playful, funny, overlapping sung syllables — a long-fought, hard-earned sense of triumph.

Už Jsme Doma
Hollywood (Skoda, 1993)
Už Jsme Doma are Velvet Revolution prog-rock eccentrics from Prague, illegal in the late ’80s and venerable now. They’ve toured the world, collaborated with the Residents, put out a soundtrack album of jazz instrumentals inside a pop-up book. Influences, both admitted and audible, look far beyond the prog norm, especially rhythmically: Pere Ubu, Henry Cow, Uriah Heep, the Damned, Zappa. Almost all of their albums are worth czeching out, but Hollywood, their third, might throw the wackiest, catchiest party. “Jassica” opens wobbling drunk and manages to turn both joyous and morose at the same time, then journeys across some meticulous sort of semi-symphonic break into hooting and hollering; “Belveder” snowballs faster and faster through a strange back-and-forth multisection montage of second-line sax honking, Soviet circus ska, and who knows what else. A cappella sections and martial beats figure in, as well.

Kultur Shock
Fucc the I.N.S. (Kool Arrow, 2001)
A couple of Bosnians, a couple of Bulgarians, a bassist from Tokyo, and a horn section from Seattle, all united in the latter locale to argue for unrestricted immigration policy in their liner notes, while remembering (the actual South Slavic members, at least) the bombings and refugee camps back in the old country. Rhythms (frantic) and melodies (sad) come from Slavic lands as well—particularly all the Balkan Gypsy ones, and what might well be some kind of high-mass Russian Orthodox church chorus in “Radio Gitana” — but also from the Middle East, the Mediterranean, the Caribbean, and wherever angry heavy-metal pummeling was born. In other words, Kultur Shock sound pretty much exactly how System of a Down always wanted to sound. They also do some chesty over-mannered emoting, work mock-boastful classified sex ads about being a “big owner with a big boner” into “Montenegro H.C.,” sneak lovely electro tuneage into “Haide Yano,” and really pull out the stops in the last three tracks—stomping yodels, propulsive bongo breaks, Right Said Fred references, rolling “r”s telling “everrrrrybody” to shake their body now.

Gogol Bordello
Super Taranta! (Side One Dummy, 2007)
By the time their best album came out, Gogol Bordello were popular enough to back up Madonna. But when Ukrainian immigrant Eugene Hutz and his band first emerged on Manhattan’s Lower East Side at the dawn of the millennium, they were a revelatory secret, punking up Gypsy beats in ways rock en Español bands had done with Latin beats or the Pogues with Irish beats. Hutz’s shirtless Saturday-night after-hours DJ gigs at a Bulgarian restaurant on the corner of Broadway and Canal, mixing Los Fabulosos Cadillacs into Captain Beefheart into Rachid Taha into balalaikas-ringing-out Cossack dances and connected the dots that shaped his band’s perimeter. Here, the opener starts: “There were never any good old days.” And from there, the fiddler-on-the-rye, Brecht-rock carnival rarely lets up: one song about a woman wanting to be a model (“Zina-Marina”), one about not reading the Bible (“Supertheory of Supereverything”), mythic pomp-and-circumstance quasi-metal (“Forces of Victory”). “Your Country,” which gets its funk from Led Zep, predicts your country will go down the tubes like all other countries; “American Wedding” says it’s 1 a.m. and people are still on the dance floor staring at their shoes, even though they have to get up early the next morning, and “she has a boyfriend.” Plus, pickled herring! Tom Waits has nothing on these guys.

Traband
Domasa (Indies Scope, 2010)
This Czech outfit — originally a three-piece, a fact their name is said to pun on while recalling obscure terms for bodyguards and East German cars—call their sound “dechno,” which evidently has something to do with playing techno-like dance music on tubas, harmoniums, trumpets, and sousaphones (and occasionally cellos, theremins, slide guitars, metallophones, “small tricks and innovations,” and other doodads). But they don’t feel techno; they feel rock — albeit rock you can move to, built from exotic folk syncopations of the West Slavic woodlands, with obligatory high-strung border-ska oompah parts and hooks borrowed from Dylan’s “My Back Pages” and Neil Diamond’s “Sweet Caroline.” “Kantorovy Varhany” builds momentum by repeating the title phrase over the sort of Eastern drone the Velvet Under-ground learned from the Yardbirds; “Obešel Jsem Horu” works a dark-ages monk chant over a blues vamp; “Krajina V Obrazech,” even tougher and six minutes long, borders on Algerian rai, shouts out Muhammad, travels through an extended mournful tuba and organ part, then clanks noisily. Vodka-soaked, funereal, foreign: Notice a thread here? 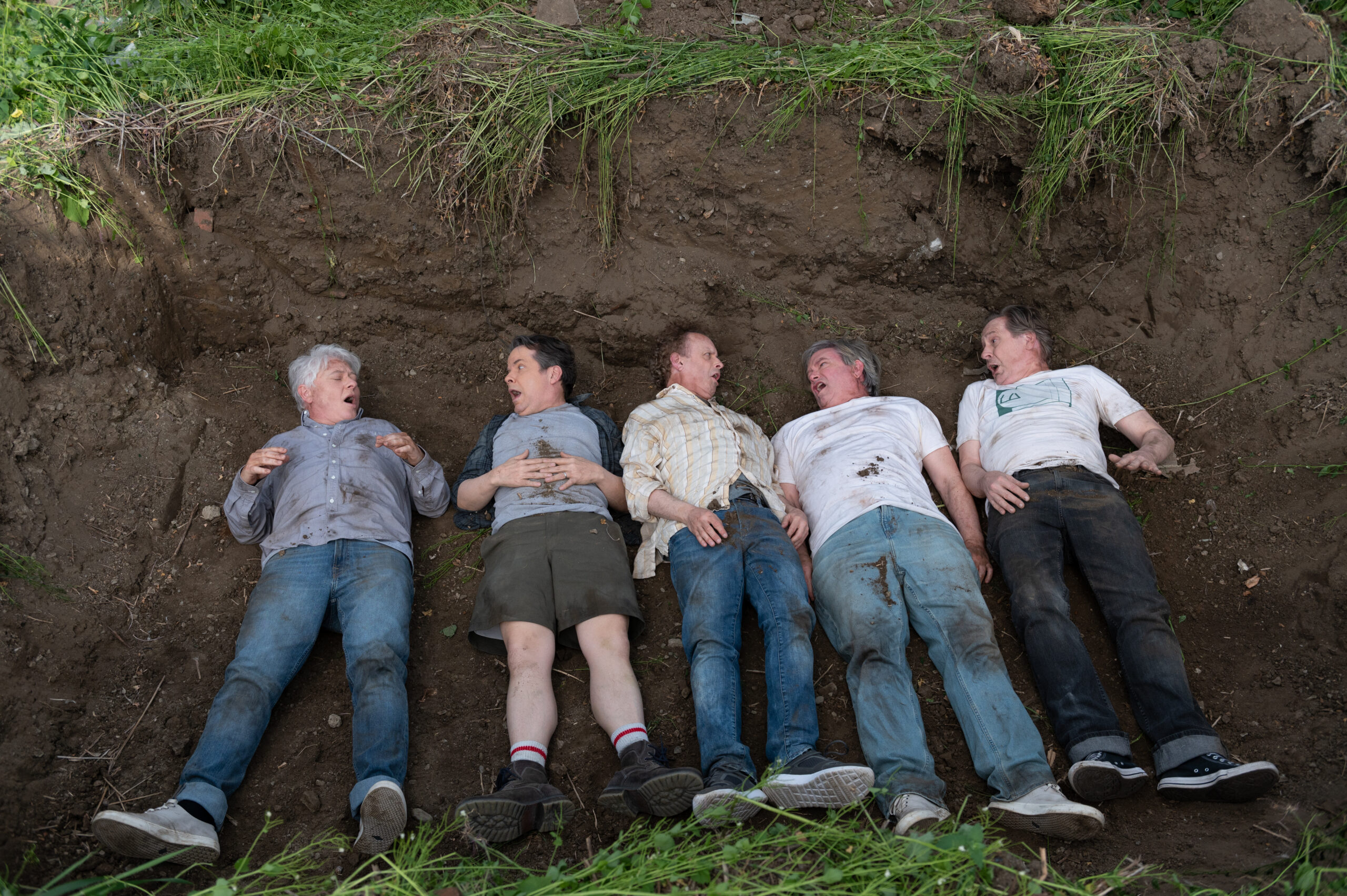