Who Charted? Usher Climaxes at No. 1, Rush and Ed Sheeran Debut Strong

First! Usher found himself at No. 1 on Billboard’s Top 200 this week, selling 128,000 copies of Looking 4 Myself, according to Nielsen SoundScan. It’s the fourth chart-topping record for the Monsters of Folk fan, though his last record Raymond v Raymond debuted with more than double that figure, at 329,000 copies, in 2010.

2 Through 10: No. 2 belongs to Rush, whose Clockwork Angels gives them their best sales week in a decade with 103,000 copies sold. Adele’s 21 falls from last week’s No. 1 to No. 3 with 63,000, while country singer Josh Turner takes No. 4 with the debut of Punching Bag, his fourth Top 10 album. No. 5 is buzzy Brit singer-songwriter Ed Sheeran, whose full-length + makes its U.S. debut to the tune of 42,000 copies, 79 percent of which were sold digitally, largely via iTunes, who touted the singer heavily in the week preceding the album’s debut (it came out last year in the UK). One Direction’s Up All Night holds down the fort at No. 6 (39,000), whie Neil Young and Crazy Horse’s Americana slips three slots from last week to land at No. 7. No. 8 now belongs to Alan Jackson, whose Thirty Miles West debuted at No. 2 last week. The Auto-Tuned-to-hell Rock of Ages soundtrack, however, did well for itself following the movie’s release last weekend; when it debuted last week, it came in at No. 15, but now it’s risen to No. 9 with 36,000 copies sold. At No. 10, finally, is SPIN’s recent one-man cover party, Waka Flocka Flame, whose Triple F Life sold 33,000.

The British Are Coming: Ed Sheeran’s American debut on the Billboard 200 marks the highest debut for a British solo artist since Susan Boyle’s I Dreamed a Dream dominated the Christmas season back in 2009. He narrowly misses taking the record for highest U.K. male solo artist debut from Thom Yorke, whose solo project The Eraser debuted at No. 2 in 2006. He did, however, have the momentum of online buzz carried over from his British release last year. The Internet says “you’re welcome,” Mr. Sheeran. 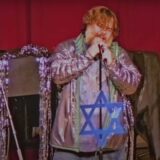 The Idler Bieb is Wiser Than the… Nevermind: Next week, we’ll see the debuts, in all likelihood, of Fiona Apple’s excellent Idler Wheel… return, as well as Bieber’s definitely destined for No. 1, Believe.