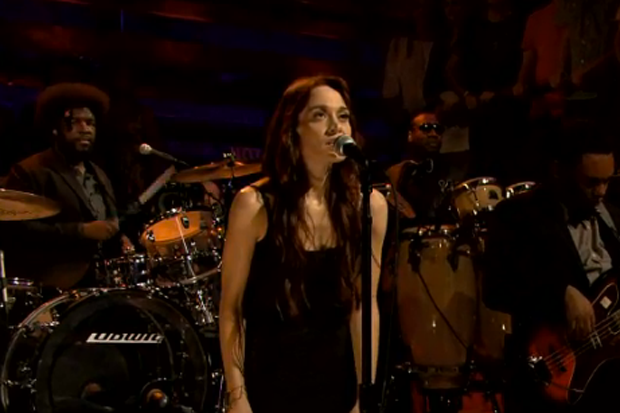 Fiona Apple grinned. She jumped up and clapped her hands. She gesticulated wildly in a valiant effort not to insult “the guilty, stupid people.” She pantomimed storming off the stage, then returned with an endearing chuckle. In short, Apple’s appearance on Late Night With Jimmy Fallon was the polar opposite of Paul McCartney’s refrain from Wings’ Band on the Run finale “Let Me Roll It”: “I can’t tell you how I feel.” Apple feels it all, and lately she’s been telling all about it. Her raw-throated delivery promises our efforts to understand will be worthwhile.

Apple covered “Let Me Roll It” as a Web exclusive in honor of Sir Paul’s 70th birthday. As with her past covers, including a song on last year’s Buddy Holly tribute Rave On, it was forceful and memorable, taking another writer’s song and delivering it direct from her own gut — in this case, helped by searing blues-rock backing from house band the Roots. On the air, she delivered a similarly stirring rendition of “Anything We Want,” from her just-released SPIN Essential album, The Idler Wheel is wiser than the Driver of the Screw and Whipping Cords will serve you more than Ropes will ever do. It’s a song with the type of childlike abandon that she captured in a field recording on Idler beast “Werewolf.”

“I finally have something that I can talk about,” Apple proclaimed gleefully at the beginning of the interview, referring to the fact that Fallon was one of her opening sets (alongside Jurassic 5) for the 2007 set at New York’s Roseland where she broke down crying. “The simplest answer is that I started crying and I could not physically stop crying,” she explained to her host last night. She looked happy and free on the show, with plenty to talk about — including a dismissive word to “somebody who thinks that the song I’m about to sing is about them” — lending truth to her words on “Werewolf”: “Nothing wrong when a song ends in a minor key.” Apple is talking, and maybe the world is finally ready to listen.