Plus LMFAO popped up on 'Fallon' to sing about spin class 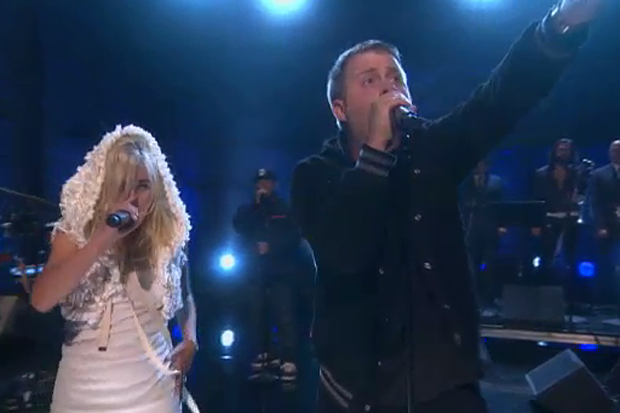 Yesterday was the kind of day you could find veteran MC El-P collaborating with a Jedi-hooded Zola Jesus on one late-night show, and LMFAO spitting a ridiculous tune about spin class on another. Let us begin with the former, who appeared on Conan with Zola serving as hypegirl and hook singer, who along with a killer DJ-bongo guy delivered a stellar performance of “Works Every Time.”

The Gaslight Anthem gave a gutsy performance of “45,” off their forthcoming fourth record Handwritten, on Late Show With David Letterman before performing an hour-long set for the show’s Live on Letterman web exclusive series that you can watch in full here:

Linkin Park laid out “Burn It Down” from their latest LP Living Things on Jimmy Kimmel Live!, where they also had time to deliver fan fave “Faint.” Chester Bennington performed with his usual passion, which means he likely did some vocal-cord damage (careful, man: it’s a dangerous game):

And the Jacksons joined a starstruck Jimmy Fallon on Late Night and discussed their legacy as “the first boy band” (including where the particularly inspired “Jackson 5″ name came from), as well as a few priceless memories of their brother, the late King of Pop, as a kid. Then, inexplicably, LMFAO showed up to sing a ridiculous, almost (emphasis on almost) SNL Digital Short-worthy song about spin class. Fallon joined them on a third bike, and there’s a gold lamé thong, because of course there is: