The Walkmen, five D.C. transplants with a collective affinity for collars and sweaters, were never known for clinging to adolescence. Everybody Who Pretended to Like Me Is Gone was the smart title of their early-aughts debut, a remarkably astute prophecy for a young, Harlem-stationed band inelegantly (and reluctantly) lumped in with the self-aggrandizing Great NYC Rock Revival of 2002 — that pre-smoking-ban musical caste of artfully mussed Lower East Side vampires and bathroom-stall hedonists. Two years and countless, stubborn refusals to acknowledge they “sounded like the Strokes” later, the Walkmen already were openly disavowing opportunism, betrayal, and the meaninglessness of social constructs on their sophomore full-length, Bows + Arrows. “When I used to go out / I’d know everyone I saw,” frontman Hamilton Leithauser simmered in the tremulously incensed “The Rat,” still one of the band’s finest songs. “Now I go out alone / If I go out at all.” Even then, he sounded relieved by his peers’ growing distance.

Eight years later, buy “The Rat” on iTunes and Genius will suggest you check out the Rapture’s frenetic disco-punk hit “House of Jealous Lovers” and the churning art-punk of Yeah Yeah Yeahs’ “Y Control,” too. Unable to fully extricate themselves from that new-millennial time capsule, the Walkmen champion comparatively stable longevity on their sixth full-length, Heaven. The tenderly nimble title track is a victory-lap cool-down that celebrates enduring friendship as a hard-won team championship; its accompanying video is a memory-lane jaunt through the band’s visual archives, synched in crowning succession like a graduation montage. “Remember, remember / What we fight for,” exhorts Leithauser, sounding like John Cafferty after a lozenge binge. Those words could be the invisible caption of the record’s accompanying publicity photo, wherein five modestly spiffy, suit-jacketed fathers stand behind Otis, the seven-year-old son of organist/bassist Peter Bauer. They are dads and husbands before they’re Walkmen, not the other way around, and everybody who pretended to like them otherwise can be gone.

“We call ourselves ‘condo rock,'” guitarist Paul Maroon joked in 2010 after three-fifths of the band fled the Empire State in favor of lives in Pennsylvania with wives, kids, dogs, backyard grills, and nail-guns. A more precise description of Heaven‘s atmosphere might be “brunch rock”: strings tuned to chime, tambourines shivering, and subdued organ plinking, all suitably palatable background music for the locavore café that serves fried eggs with beets, ricotta-and-fig sandwiches, and kale as a side. Starbucks pairs Edward Sharpe & the Magnetic Zeros’ folk-jam granola alongside the antioxidant nut bars by their cash registers; Heaven could be racked comfortably beside a $9 jar of artisanal beer mustard. 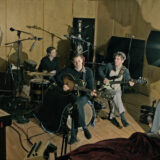 Sounds awful, right? “Give me a life that needs correction,” Leithauser warbles in the clomping alt-country opener “We Can’t Be Beat,” then pouts, “Nobody loves, loves perfection.” But the primary weakness of Heaven isn’t the existential crisis that harmony can bring; it’s that the band’s frontman reconciles an absence of pathos with bathos. Shaped by Phil Ek’s production, Leithauser relies more on his naturally lower, richer vocal range here than ever before, but sometimes these overly emoted flourishes sound like he’s either taking cues from Billy Vera or trying to make his kid’s Jell-O wobble. “It’s not the sing-gerr, it’s the suu-ong” is how he ad-libs a classic Mick Jagger lyric on “Heartbreaker”; you don’t have to wait longer than the next suu-ong, bluesy loser “The Witch,” for more evidence that he’s gotten the message reversed.

That said, Heaven does offer some genuinely transcendent moments: the clanging-guitar lilt of “Nightingales,” the gorgeously ascendant “Love Is Luck,” the tiptoeing balladry of “Southern Heart.” The Walkmen opened a series of shows for the Arcade Fire last year, but their tourmates’ only audible influence here is the arresting urgency of “The Love You Love,” a life-affirming, high-beam-speed anthem that draws on Paul Westerberg’s raspy wail and Bruce Springsteen’s neck-vein vehemence for its arena-rock exhilaration. It’s not enough, though. By the shuffling arrival of the penultimate track, torpid send-off “No One Ever Sleeps,” it’s time to ask for the check.