Slipknot on ‘Antennas to Hell’ and Why Their Bassist Stays Backstage

"What gives him the right to be onstage with us right now?" 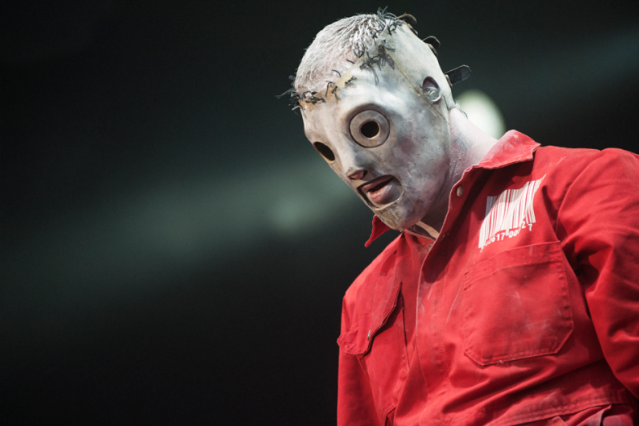 Slipknot co-founder/conceptualist/percussionist Shawn M. Crahan (a.k.a. Clown) really hates greatest hits albums. ” ‘Greatest Hits’ means one of three things to me,” he explains from his Iowa home, five weeks before the July 24 release of the band’s first official comp, Antennas to Hell. “Either the band is breaking up, they’re trying to get off their record company, or they’ve become some pathetic infomercial at two in the morning and their label is sucking them dry while a couple of ‘rock star’ actors try to sell their shit when they should be jamming.”

None of the above applies to Slipknot, who remain one of America’s most popular metal bands more than 12 years after their formation in Des Moines. This summer, Slipknot will co-headline 2012’s Rockstar Energy Mayhem Festival with Slayer and will launch their own Knotfest in August. Yet there are distinct advantages to dropping a new release in the middle of a tour. So Crahan and his bandmates have spiced up the 19-song collection to make the disc of career-spanning songs mean a little more.

“The songs were put in a certain order by us, so you get a very unique listening experience; it’s like its own piece of art,” Crahan says. “Not even a machine could do that. Also, I spent two months on the CD booklet. You don’t just get a little piece of paper that goes inside the album cover. You get a huge booklet of some sculpture, photographs and theory that kids can ponder, conceptualize and really enjoy.”

The album’s second CD is a recording of the band’s performance at the 2009 Download Festival, originally released on DVD in 2010 as [sic]nesses. “We kicked the living shit out of that show,” Crahan says. “I did a shot of absinthe with Marilyn Manson before we went on and we were so tight… It’s in the top 10 of Slipknot shows of all time, and it’s one kids have to hear on CD to get the full audio effect.”

Download 2009 was one of the last shows Slipknot played with bassist, songwriter and co-founder Paul Gray. On May 24, 2010, while the band was on a break, Gray was found dead of an overdose of morphine and fentanyl at a hotel in Urbandale, Iowa. For the band, losing Gray was catastrophic. Not only was Gray an exceptional songwriter and skilled bassist, he was an easygoing guy who got along with everyone. “We all had their own special relationship with Paul,” Crahan says. “He used to live at my house. We used to run together on the weekends creating hell. I loved his music and I would never have had the chance to do what I’m doing if he didn’t believe in my art from the beginning. He’s my brother and he’s greatly missed. A bunch of us went to visit his gravesite on the two year anniversary since he died, and I’ve gone there about every day since then. I went there to wish him a Happy Father’s Day. It feel good there.”

When Slipknot were mentally prepared to play some summer festival shows last year, original guitarist Donnie Steele — who quit near the completion of the band’s first record — filled in for Gray. He will join Slipknot on the Mayhem shows, and will again be playing from backstage, out of the view of the crowd — a move that has surprised some fans.

“What gives him the right to be onstage with us right now?” Clown says, slightly perturbed. “When we’re going through an experience like this with our fans, they need to concentrate on the eight members that are grieving, not on someone new. This isn’t a diss on Donnie. I love Donnie, but we chose to tour for just one reason — to share the tragedy, pain and grief of what happened to Paul with our fans instead of going through it alone.”

While Crahan believes most of the 2012 Slipknot shows will be cleansing and therapeutic, there are two concerts he’s actually looking forward to, the Knotfest festivals the band has scheduled, August 17 in Council Bluffs, Iowa and August 18 in Somerset, Wisconsin featuring a group of hand-picked friends — including Deftones, Lamb of God, Serj Tankian, the Dillinger Escape Plan, Gojira, and more. “It’s something we’ve wanted to do for a while,” says Crahan, “a festival in the tradition of the European festivals where you get to camp out and see some cool bands. We’re doing it our way for our culture because Slipknot is no longer a band, it’s a culture. And after two years of crying and hurting, this is gonna be a good release.”

After Knotfest, Slipknot plan to take a year off before returning to the studio to record the follow-up to 2008’s All Hope is Gone. Some of the members are already off to a good start. Drummer Joey Jordison has written 30 new songs, vocalist Corey Taylor has penned lyrics, and guitarists Jim Root and Mick Thomson are busy writing riffs.

“That’s how everyone is coping with the loss of Paul,” Crahan surmises, “by writing. Will all of that stuff be used? No. Will some of it be used? Of course. But until we get to that area I can’t tell anybody anything. It’s like asking me who the next bass player is. I’m not gonna give you an answer ’cause I don’t have to think about it right now. I need about a year to grieve get my shit together so I can control my emotions in the studio, which is something I can’t do right now. I want to be able to go in there and realize my brother’s not there. And then when I’m asked to do a part, I can control myself and give Paul, the band and the fans everything that Slipknot needs to be.”