Watch the new video off 'With Siinai: Heartbreaking Bravery' 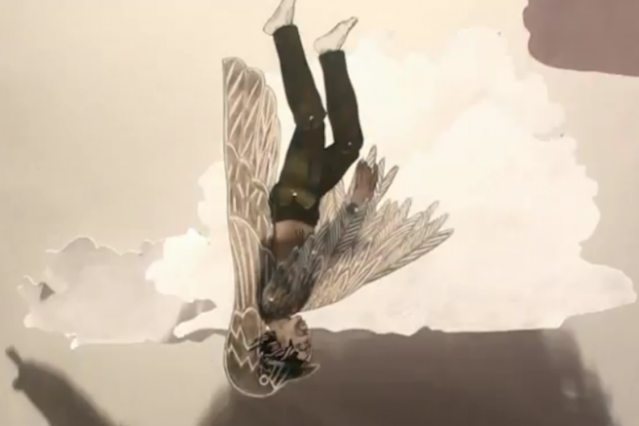 According to director Marsha Balaeva, the new video she has created for the song “Faraway Lightning” by indie rockers Moonface — one of Wolf Parade vocalist-keyboardist Spencer Krug’s side projects — uses metaphors to illustrate the five stages of grief. “At the start of the journey the hunter meets the pangolin in the Underworld who is an effigy of him, curling up to escape the reality of the fall,” she explained in a statement. “Spirit guides help the hunter along his path through realms of Earth and Heavens on his way to acceptance.”

The song comes from the album With Siinai: Heartbreaking Bravery, a collaboration between Krug and the Finnish group Siinai that they released earlier this year. And the experimental-leaning synths and tribal drums fit well with Balaeva’s shadowy animation. Containing intricately drawn animals, watercolor mountains and an arrow piercing the heavens — and some less-than-subtle allusions to the Greek myth of Icarus, a recent subject of Krug’s in the song “Idiot Heart” by his other group Sunset Rubdown — it’s up to the viewer to figure out what it all means, but it works with the music in a way that matches the song’s eerie soundscape.