Home » Lists » Making the Brand: The 40 Greatest Band Names of All Time » Page 6

15 X
Known origins: Singer-bassist John Doe scavenged a giant X that once sat atop a demolished Ex-Lax factory in Los Angeles. He kept in it his apartment. He later started dating a lapsed Catholic poet named Christine Cervenka who had X’d out the “Christ” in her name, á la “Xmas.” There are no coincidences in God’s universe, even after you’ve stopped believing.

Why It’s Great: X is the most visually striking letter in the alphabet, and maybe the letter most heavily freighted with meaning too. In addition to the Jesus-y connotations, X stands for obliteration and denial. It marks the spot and represents the unknown. Also, it’s probably the second-least-utilized first letter of a band name (after Q), ensuring that you’ll stand out in the record bins. (VA, P, JNSQ) K.H.

14 The Velvet Underground
Known Origins: In 1965, Lou Reed, John Cale, Sterling Morrison, and Angus MacLise were providing music for multimedia happenings, but couldn’t settle on a name they liked: The Warlocks? The Falling Spikes? Then MacLise found a book in their friend Tony Conrad’s apartment: a sensationalistic 1963 paperback by Michael Leigh about “aberrant” sexual subcultures. As Morrison said, “It’s abstract and the word ‘underground’ meant something, and so we said, ‘Sure, why not?'”

Why It’s Great: It turned out to be the perfect evocation of the band’s work: not just a forbidding artifact of the counterculture, but an intoxicating, erotically charged one. The name promised a luxurious destination, but one that you’d have to dig through a rocky mantle to find. And its language subsequently turned up in hundreds of other artist’s names, from Digital Underground to Velvet Revolver. (P, I, T, JNSQ) D.W.

13 Sex Pistols
Known Origins: In 1974, before he departed London to turn the New York Dolls into fake communists, future Pistols manager Malcolm McLaren, transgressive designer Vivienne Westwood, and future Clash manager Bernie Rhodes stitched up the manifesto (and T-shirt) that gave birth to U.K. punk. Titled “You’re Gonna Wake Up One Morning and Know Which Side of the Bed You’ve Been Lying On!” it consisted of “Love” and “Hate” lists, and featured the first known mention of the name “Sex Pistols”; actually, the manifesto cited a group called “Kutie Jones and the Sex Pistols,” a glib reference to the crap garage band led by Steve Jones that had been loitering around Westwood and McLaren’s Let It Rock clothes and record shop. Later, after John Lydon became “Johnny Rotten” and turned McLaren’s T-shirt gibe into a cultural bloodbath, the name was said to have a variety of more pointedly glib meanings — an obvious promotion for McLaren and Westwood’s store, renamed “SEX” upon McLaren’s return from New York (“I was out to sell a lot of trousers,” he crowed); or, as bassist Paul Cook ventured, the name was a blunt expression of McLaren’s relentless, nattering “fantasies about sex and violence.” When he hissed the word “assassins,” in reference to the group, McLaren’s serpentine swindler side sent chills.

Why It’s Great: What’s the most elemental compound of pop or rock’n’roll? Sex. And how many great band names include that word? With apologies to Disco-Tex and the Sex-O-Lettes, Tupelo Chain Sex, and Sex Clark Five, only one. Paired with the pop-savvy Situationist rhetoric and ransom-note graphics of McLaren and artist Jamie Reid — which gave Johnny Rotten a fiery S&M playpen to inhabit — the Sex Pistols expertly promoted the image of dole rejects in bondage pants threatening random, vaguely political acts of mayhem. Which was subversively potent enough in the mid-’70s. Plus, how could you not laugh? As Lydon said, in a vintage, no-duh remark: “I liked that name very much. I thought it was hilarious….I thought it was perfect to offend old ladies.” Punk, in a word. (T, P, I, JNSQ) CHARLES AARON

12 Iron Maiden
Known Origins: While watching a film adaptation of The Man in the Iron Mask, bassist Steve Harris heard a passing reference to a seven-foot-tall metal sarcophagus with spikes inside called an “iron maiden.” He just had to name his band after it. It’s a real-life horror, too: The most recent application, allegedly, was by Saddam Hussein’s son, Uday, who is said to have used it to torture Iraqi athletes.

Why It’s Great: We could try to sound all smarty-pants and talk about how it juxtaposes beauty and horror, how its sociopolitical implications played beautifully during the early-’80s rise of England’s Iron Lady, Margaret Thatcher — but really it’s just one of the most metal names ever. Its brutal origins dovetail nicely with the band’s early gritty material, especially its eponymous song, which bears the promise that “Iron Maiden’s gonna get you…” Yowch! (I, WP, P, JNSQ) K.G. 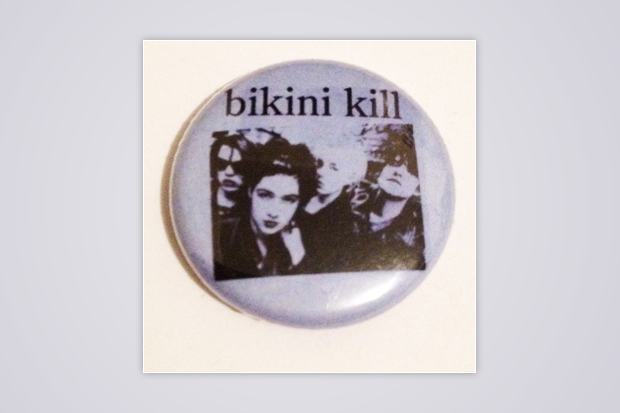 11 Bikini Kill
Known Origins: In 1988, Tobi Vail began publishing a feminist punk zine called Jigsaw, which drew the attention of the likeminded Kathleen Hanna before the two teamed up on their own DIY publishing project, a handmade manifesto called Bikini Kill, which read, “Oh yeah and BIKINI KILL is an angry girl zine too, and we are gonna do more so stay tuned.” It arrived in 1991. A few months later, its makers — Hanna, Vail, and Kathi Wilcox — along with guitarist Billy Karren, put out a cassette called Revolution Girl Style Now, adopting the zine’s name as their own. A British band called Jigsaw had been around since the ’60s, so they made a wise choice.

Why It’s Great: Like babydoll dresses paired with combat boots or lipstick repurposed as a magic marker, Bikini Kill blends the explicitly feminine with the expressly violent (there’s even a twinge of Faster, Pussycat! Kill! Kill! by eternal band-name muse Russ Meyer). Both words are ear-catching on their own, but their seemingly illogical juxtaposition — and the name’s harsh repeated K sound — is meaningfully uncomfortable: a call to action, a rallying cry, a kick in the ass. (T, P, I, JNSQ) C.G.