Home » Lists » Making the Brand: The 40 Greatest Band Names of All Time » Page 2

35 Thin Lizzy
Known Origins: As legend has it, guitarist Eric Bell suggested the Irish hard-rockers name themselves after Tin Lizzie, a robot in the U.K. comic book The Dandy. In their Irish brogues, words like “thing” quickly became “t’ing,” so they flipped the script with hopes of getting it to stick in their countrymen’s heads. Alternative origins suggest that the name refers to a beautiful Dubliner at the time named Liz Igoe or possibly a Ford Model T, also known as the Tin Lizzie.

Why It’s Great: There’s something about Lizzy: whether it’s the suggestion of a female-fronted band, the alluring appeal of the word “thin” (see: Thin Mints, Wheat Thins), or just some cosmic interplay in the arrangement of Ts, Ls and those unlikely Scrabble-winning Zs. (JNSQ, WP) K.G.

34 Teenage Jesus & the Jerks
Known Origins: Underage go-go dancer/waitress Lydia Lunch liked to get in people’s faces, and in early 1977, she and boyfriend James Chance tried to start a band called the Scabs. A few months later, they met drummer Bradley Field and started working up ten-minute sets of 30-second songs, before devising their snot-rocket of a name.

Why It’s Great: TJ&TJ, and the no-wave scene to which they belonged, took a baseball bat to every aspect of rock orthodoxy. Borderline blasphemous, deliberately ludicrous, an absurdist salute to rock’n’roll tradition itself, their name suggested (accurately) that Lunch took herself both very, very seriously, and not at all. (T, JNSQ) D.W.

33 The Who
Known Origins: It was evidently suggested by Pete Townshend’s art-school pal Richard Barnes during an official rename-the-band rap session (“The Detours” was taken), responding to a request for something generic. (Also considered: “The Hair.”)

Why It’s Great: Attention, all you young garage-bound chumps threatening to name your band “Free Beer” or “To Be Announced” or whatever: You were beaten to that joke by, like, five decades. It’s short, it’s knowingly self-deprecating, it lends itself to a (hilariously phallic) logo, and it looks fantastic on T-shirts, posters, banners, and especially a bass-drum head. And there really should be no other criteria for a rock band’s name beyond “It looks cool on a bass-drum head.” (WP, I, VA) R.H. 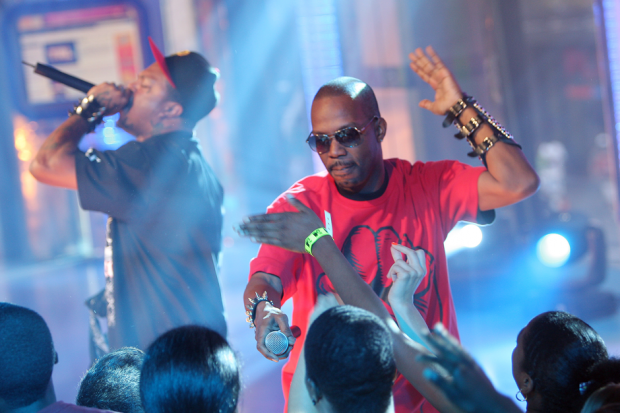 32 Three 6 Mafia
Known Origins: The official party line says that they started with three members (DJ Paul, Juicy J, and Lord Infamous), then ended up with six (becoming a sextet for their 1995 debut, Mystic Stylez) — but the greatest trick the Devil ever pulled was convincing the world that he didn’t exist.

Why It’s Great: By combining the classic gangsterisms beloved by hip-hoppers (“Mafia”) with the VHS-brewed satanic imagery adored by metalheads (“666”), Three 6 created something truly unique and mysterious, a horrorcore fog bubbling up somewhere miles away from hip-hop’s two coasts. (I, VA, T) C.W. 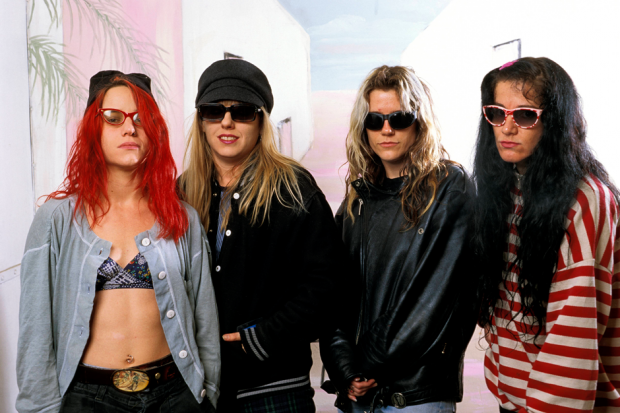 31 L7
Known Origins: The alterna-metal heroes plucked their name from ’50s beatnik slang for the hopelessly uncool. Shape one thumb and forefinger into an L and another into a 7, fit ’em tight together, and you’ve got a square. You dig, daddy-o?

Why It’s Great: Had some college-rock nerdballs resurrected the term, the knowing irony would’ve been unbearable. But these unquestionably cool grungesters make the dated slang sting. The stark letter-number pairing stands out visually, too, especially when surrounded by the bold circle of the band’s logo. L7 is also apparently mistaken for a sex position — a variation on 69 — by Internet commenters who either have limited bedroom experience or only can bend at the waist like Lego people. (WP, I, VA)

From the Band: “We were all shooting down each other’s band-name ideas, most of which were god-awful,” says vocalist and guitarist Donita Sparks. “I halfheartedly threw out L7, which was met with silence and shrugged shoulders. So we went with it! Gender-wise, it was nonspecific, which we liked. We also discovered it could be made into a silly gang symbol using one’s hands, which we also liked. L7, of course, is slang for someone who is a square. If you don’t know what that is, sadly maybe you are one.” KEITH HARRIS