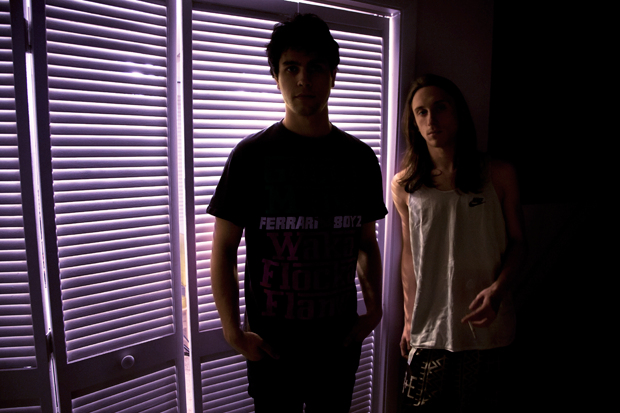 The group’s brief but weighty discography so far signals its place in the online electronic music diaspora: a new age-meets-crunk remix for ghostly Berlin-via-Manchester producer Holy Other, an aesthetic-defining 40-minute mix that spans from ’90s R&B to contemporary U.K. bass music, and a head-foggingly sinuous EP on a tiny, vinyl-oriented label run by a couple of U.S. music blogs. Oh yeah, Perry has also been the subject of a quick interview by Kanye West DJ and Fool’s Gold label co-chief A-Trak.

Recently honored among SPIN’s Best New Artists for May, Supreme Cuts are set to release their debut album, Whispers in the Dark, on July 10 via Dovecote Records. A few tracks from the LP — the twitchy, presumably No Limit-referencing “Silkk” and more hazily drifting, presumably drug-referencing “Sherm”, and vastly booming, presumably Werner Herzog-referencing “Lessons of Darkness (Apology)” — have all already quietly surfaced, and now you can hear another (supreme) cut, “Ciroc Waterfalls,” below. Based around a meditative synth loop, bell-like tones, and, yup, noises that might be vodka trickling, it’s the best — and most distinctive — offering we’ve heard from Supreme Cuts yet: a transmission from anywhere, nowhere, or a starship pleasure deck in the not-so-distant future.