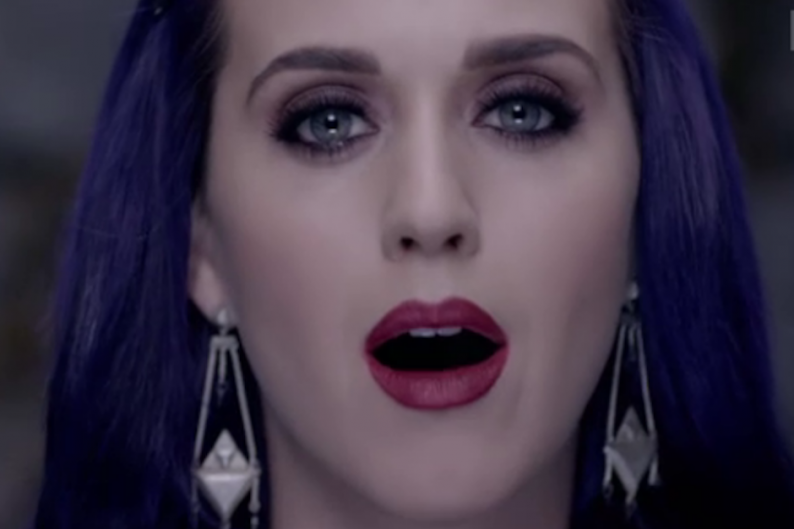 On the outside, Katy Perry’s official not-a-lyric-video video for her first post-divorce single “Wide Awake” is as cotton candy fairy princess as her two recent award show performances of the song, but as the four-minute clip progresses, it’s clear that this time, themes are going to run a little deeper (though just as autobiographical) than in her usual goodie-goodie, bubblegum-fueled teenage dream.

In a direct nod to her upcoming 3D movie, the opening and closing scenes of “Awake” are pretty meta, starting with Perry coming off the set of her “California Gurls” video and wrapping with her stepping onto a stadium stage to perform “Teenage Dream.”

In between those two bookends, however, Perry changes. Backstage, she is magically transported into a dark and scary realm, where she and a little girl (a tiny version of herself — she’s awfully fond of those lately) must save each other from the dangers of weakly veiled metaphors of forbidden fruit, walls closing in, and mental breakdowns. When they finally escape, they reach the end of the rainbow, or the garden of Eden, or Candyland, or whatever, where Prince Charming and happily ever after awaits them — except then there’s a twist.

Well, we won’t spoil the ending, but we’re going to guess Perry assumes you know who her ex-husband Russell Brand is, and that their marriage ended. Perry is done living a Teenage Dream, … even though she performs that song 15 seconds later, but now she can make happy endings for herself — with the help of her Katy Kat superfans, who get a shout-out via expertly trimmed shrubbery. Maybe it’s time she took M83’s Anthony Gonzalez up on his offer to work on her next album: he knows a few things about dreams, too.