God save the disco queen 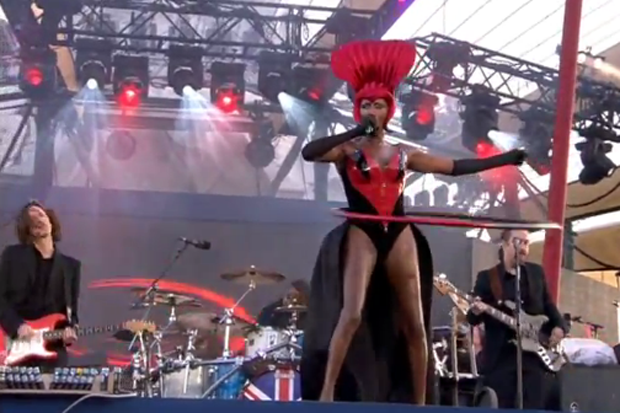 For a stretch in the ’80s, Grace Jones parlayed her marble-weight voice, androgynous persona, and deeply chic sensibility into some excellent disco records, helped in no small part by her selection of top-notch Jamaican rhythm section Sly Dunbar and Robbie Shakespeare. The model-actress-singer demonstrated she hadn’t lost a step with 2008’s Hurricane, but as recently as an interview that appeared in British magazine the Wire earlier this year, her former producer, disco luminary Tom Moulton, was slamming her as “Disgrace Jones.” What a glorious reminder of her athletic gifts as a performer, then, was Jones’ big-band performance of 1985’s funky “Slave to the Rhythm” at the Queen’s Diamond Jubilee Concert on Monday (via Buzzfeed). Wearing a black-and-red leotard and extravagantly ginormous hat, Jones hula-hooped throughout the entire four-minute song, still somehow managing to belt out her husky cyborg vocals. Elizabeth II has only been Queen of England for 60 years; Jones, at 64, still puts the rest of us to shame.