Feel the Noise: Behind the Chase for Ear-Bleeding Volume

Home » SpinTV » Spotlight » Feel the Noise: Behind the Chase for Ear-Bleeding Volume

“As soon as volume exceeds 80 decibels, blood pressure rises,” wrote jazz scribe Joachim-Ernst Berendt in 1983. “The stomach and intestine operate more slowly, the pupils become larger, and the skin gets paler…Unconsciously, we always react to noise like Stone Age beings. At that time, a loud noise almost always signified danger.”

In short, watching a loud band is a corporeal roller coaster — and some bold auteurs have decided they never want to get off.

“Come on, you’ve been on these rides at theme parks, right?” asks Joey DeMaio, bassist and founder of peerlessly loud-and-proud power-metal institution Manowar. “People don’t know if they’re gonna make it to the end of it or die in the meantime, but it’s a fucking thrill. It’s the same thing for our concerts.” One year after Berendt pondered volume’s effects on his hapless bowels, Manowar broke the world record for loudest musical performance in London, eventually topping it two more times before the Guinness World Records people mailed a polite letter that DeMaio paraphrases as, “We will not print this because we do not encourage this type of behavior.”

So exactly what does encourage this behavior? “A lot of people mistakenly assumed that it was some form of aggression,” says Michael Gira of the notoriously oppressive volume favored by his band, noise-rock bludgeoneers Swans. “It’s really very much an extreme spiritual pursuit, like a heat lodge or something. Or if you’re maybe having tantric sex and it keeps building and building and it never releases.” 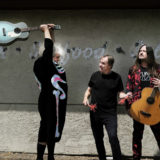 You can’t blame people for thinking Gira wanted to hurt them — turning off a club’s lights and locking the doors may have implied at least a little malicious intent. And bodies do naturally crumble when exposed to high volumes. Contact with extremely high decibel levels can cause stress, hypertension, and the annoying tinnitus that originally broke up Boston noise-punk legends Mission of Burma. Studies show that the loud volumes in shopping malls turn us into more impulsive consumers. More tragically, high volumes are integral to the type of “no-touch torture” used at U.S. detention centers like Guantanamo Bay. When subjected to involuntary music, it feels as though one is being “beaten with a hammer,” a detainee told NYU music professor Suzanne G. Cusick.

Although the MythBusters tried (and failed) to find the hallowed “brown note” that makes listeners involuntarily evacuate their systems, they never claimed that testing the theory was fun. DeMaio, on the other hand, proudly beams that his louder-than-thou speaker setup makes him feel “like fucking 50 people are kicking the shit out of you.”

Ex-Guinness record holders and tinnitus casualties the Who were one of the first rock bands to truly explore the physical properties of volume, emboldened by the invention of the iconic 100-watt Marshall amplifier in 1965. Blue Cheer and Vanilla Fudge did their best to up the ante, no doubt emboldened by the liberating combination of vibrations with psychedelics.

But 1982 was truly the year volume broke, seeing the first releases by Manowar and Swans. Gira spent the early ’80s doing construction and demolition work — his nail gun made a guest appearance on the 1986 single “Time Is Money (Bastard)” — and would funnel his earnings into new amplifiers, continually forced to replace the ones he was blowing. “I used to set up four bass amps in a semicircle inside the rehearsal space when no one was around and put a cassette loop in each of them and turn it all the way up,” he says. “I’d stand in the middle of it and just listen to this kind of roar of cacophony; not listen to it, but experience it. Be inside it. I’d throw myself on the monitors, and I actually broke my ribs a couple times doing so…but I didn’t feel anything.”

At the same time, British artists like Sutcliffe JÜgend and Nocturnal Emissions were taking industrial music’s grind to an ear-splitting endpoint. And for sheer, audience-deafening assault, it was hard to beat noise pioneers Whitehouse, whose blown-out brown-outs defined the melody-free soup of “power electronics” in the mid-’80s. Whitehouse bleakmaster William Bennett sees volume as inextricably linked to the loud noises emanating from the animal kingdom, and the powerful biological responses therein.

“It has that very liberating effect,” says Bennett, before diving into the type of creepy, morally suspect anecdote that defined the ’80s industrial scene. “It creates this incredible permissiveness, which is something I cherish myself, where people feel they’re in this realm where the rules don’t apply anymore and almost anything can happen. There’s a great story about how this girl was being groped at one of our concerts, and just the sheer volume and intensity of the experience catered to the circumstances by which she allowed it to happen. We’ve had a couple of guys fucking right in front of the stage in one German performance.”

By the sensitive alterna-’90s, upping your volume game seemed like a macho pursuit better left to MotÖrhead. Or at least turned on its ear for the hypnotic, euphoric, inspirational 15-minute “holocaust section” that closed My Bloody Valentine shows, which frontman Kevin Shields hoped would invoke the feeling of “imminent danger” that occurs when decibels are applied to our fragile bodies. For Buzz Osborne of grunge godfathers the Melvins, the band’s intestine-rumbling low-end was simply pragmatic: “I play with these drummers who play like a fucking freight train,” he says. “It ain’t gonna work with a Fender Twin Reverb up there.”

The Melvins were a formative live experience for Greg Anderson of Sunn O))), a band whose pulseless, drummerless, coffin-stark churn is equal parts Melvins sludge and MBV suffocation. “It’s more about that extra dimension where you can actually feel it rather than see it and hear it,” says Anderson. “Basically, like a sound massage. This escalation of cabinets and amplifiers is about being able to feel it. If you couldn’t feel it on the back of your legs, it wasn’t loud enough.” Anderson uses the vibrations from Sunn O)))’s monolithic amplifier wall to find a relaxing, meditative state outside himself. Though, like the blank slate his band’s minimalist drone fog implies, there is no definitive reaction to Sunn O)))’s towering hum therapy.

“There was one tour that we did — we noticed some vomit on the floor after the show ended, then the second night there was vomit next to the sound booth,” says Anderson. “We gave our soundman a challenge: We’d give him an extra $50 a night if he could prove that he’d made someone vomit from the volume. I think he earned about $150 for the rest of the tour.”

Contemporary Brooklyn trio Black Dice play with such powerfully vibrating force that audience members often approach them to say they felt like they were swimming. Their six studio albums, including the just-released Mr. Impossible, are renowned for a meticulously sculpted, seasick mosh pit of cartoon squelches. And knob-bender Eric Copeland demands high volume to explore the very core of the band’s sound. “I stand with my head in front of one of the speakers. It’s actually a really good place for me, because I can get the fine-tuning of sounds a little bit. To me it’s the same as having your head against your violin or something.”

Of course, even when it’s intended for uplifting ends, volume still rubs some people the wrong way. (Black Dice opened a recent Animal Collective tour, and concertgoers “threatened to threaten” them with a lawsuit, claims Copeland.) Extreme volume also has the ability to shake up the occasional venue. “I remember we played this weird brunch, of all things, somewhere in France, and the minister of culture came,” adds Copeland. “It was, like, this 16th-century, totally ornate and beautiful [building]. All the 500-year-old dust started falling and they told us to stop, and that was it.”

Osborne has had similar problems bringing his band to places that aren’t prepared for heavy vibrations: He gets downright heated about being forced to conform to decibel limits in some European cities. “In Zurich, it’s a 100-decibels sound limit. Are they trying to tell you that Swiss people are too stupid to know when something’s too loud?” he asks. “Like a box turtle staring into a light until it dies because it’s too stupid to move? I didn’t even want to play loud until you told me I couldn’t.”

And that antiauthority impulse, the one that has driven rock shit-stirrers since time immemorial, certainly served as inspiration for DeMaio, as well. Currently working on their 12th studio album, Manowar have spent three decades crafting a scientific arsenal of speaker cabinets and modified power amps. (DeMaio’s interview with SPIN was abruptly rescheduled after he blew up three amplifiers that morning.) All in the name of good old vindictiveness.

“I realized that the people who run nightclubs are only interested in getting people on the dance floor, getting them hot and sweaty, and selling drinks,” he says. “When I realized that I was not going to become a human jukebox, I swore a vow of revenge against club owners that treat the bands like shit. Whenever somebody would tell us to turn down, I would turn up as loud as I could. I’m just gonna build the highest quality backline you can and blow these joints down, just pack the places so good that they’ll shut the fuck up while we lift the roof off these shitholes.”

A record producer as well as a musician, DeMaio wears earplugs, gets his hearing checked regularly, and encourages his audience to do the same. So, can we get a letter from your ear doctor? DeMaio laughs, then quips, “He died when we invited him to a show.”