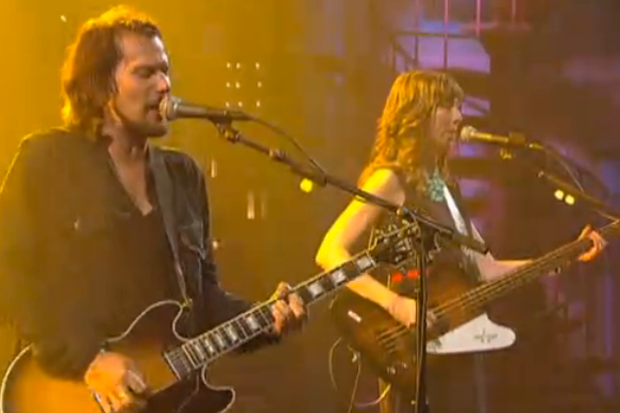 The list of artists who’ve gotten the tap for a full Live on Letterman showcase is pretty eclectic — Adele, the Shins, Peter Gabriel, to name a few — and now Silversun Pickups have joined the crew. The band played “Bloody Mary (Nerve Endings),” the lead single off their strong-selling new album Neck of the Woods on the regular show, then turned out a nearly hour-long set you can watch here, now! As a bonus, check out photos from the studio in the woods where Woods came together.

Also on late night yesterday, the increasingly omnipresent fun. casually brought the song you (and they) can’t get away from, “We Are Young” to Jimmy Kimmel Live. We wouldn’t have minded a version of “Some Nights” complete with a Civil War backdrop instead, though.

Jimmy Fallon hit on Regina Spektor right before she gave a lively and confident performance of New York City/Paris paean “Don’t Leave Me (Ne Me Quitte Pas)” (with a hairstyle that made her look ridiculously like Kat Dennings) on Late Night.

And Def Leppard returned to TV, hitting up Leno to promote Broadway-musical-turned-Tom-Cruise-vehicle Rock of Ages with a surprisingly (or unsurprisingly, given how indestructible drummer Rick Allen is) forceful version of “Rock of Ages.” Watch through the end if you want to see Leno guest Aubrey Plaza exchange hugs and words — another video opportunity, perhaps? Via Audio Perv: