Azealia Get Your Gun: Banks Goes West in ‘Liquorice’ Clip 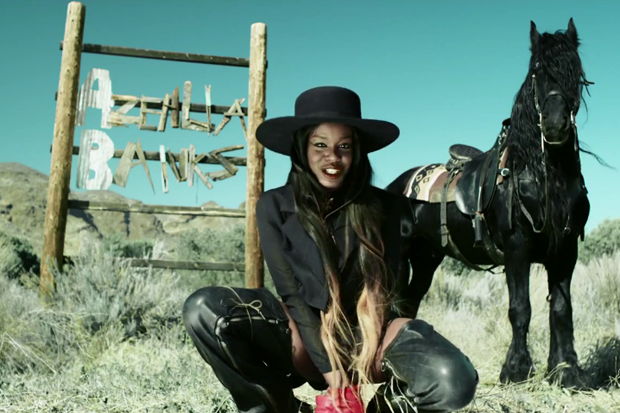 Rising hip-hop superstar Azealia Banks just dropped her new Rankin-directed, color-treated clip for “Liquorice,” perhaps the strongest track on her recent 1991 EP (via Karen Civil). Aesthetically, the video is as delicious as her video for “212”, perhaps moreso considering that now Banks has both a technicolor palate and a costume chest to play with. Here, Banks is a black-leather-clad cowgirl gallivanting around the Wild West — a Gagacentric update of the circa 1988 rap video staple employed in Kool Moe Dee’s “Wild Wild West” and Marley Marl’s “The Symphony.” (Banks does work with Gaga’s stylist, Nicola Formichetti, who provided some similarly patriotic get-ups for the “Telephone” epic).

Incidentally, Banks performed “Liquorice,” as well as practically every other song in her repertoire, at her Mermaid Ball recently in NYC. SPIN was there, to count as many costumes as possible. She’ll stage a second Ball in L.A. soon, where the cowgirl look will no doubt surface. Yee-haw!