Pleased to Meat Me: ‘Bob’s Burgers’ Creators on Episode 7 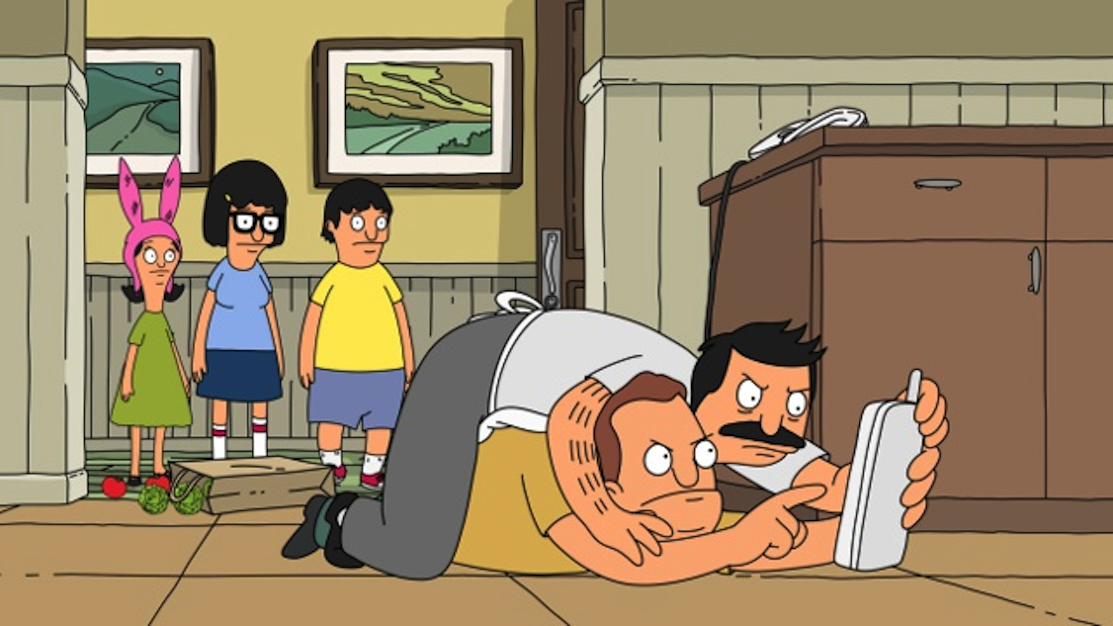 After Bob’s Burgers gets rightfully panned by local newspaper food critic the Moody Foodie (voiced by our own Patton Oswalt), the kids snap into crisis-PR mode. Fearing he’ll have to close the place and get a nightmarish cublicle-jockey job, Bob has his own idea: Show up at the Foodie’s house and demand a do-over, which, of course, soon finds the critic bound and gagged and being tortured via wet willies by the rest of the town’s spurned restauranteurs. The episode was written by Steven Davis and Kelvin Yu, who also wrote last week’s, and they’ve been kind enough to once again field our dumb questions. As always, impenetrable, spoiler-based references abound.

Have you ever gotten a bad review that made you want to take revenge, or at least question the critic, if not hold him hostage? Is this a common fantasy among TV writers?
No, Steve, that’s actually never happened. But last week, Jon Schroeder, one of the Bob’s Burgers writers, put on a bunch of hand lotion and then ate a whole rotisserie chicken in his office with no napkins. Also, he had a cold so he was sneezing a lot and the whole time he was watching sports bloopers and laughing with his mouth full of food. He must’ve eaten that chicken in two minutes.

Sure. But! Did this at all feel like a chance to comment on how people are quick to judge shows, which are worked on so hard by so many people, off the slimmest of sample sizes, or for the most superficial reasons?
I think for writers, the easy way out is to take an adversarial relationship with critics (or with executives, agents, other TV shows, or even the audience). The harder thing to do is to realize that everyone is just doing their job. Bob’s making burgers, critics are writing reviews, and at the end of the day that’s all you can really focus on. I think we sort of accomplished that complicated relationship in this episode without coming off too Rage Against the Machine. But I guess that would be up to someone else to tell me whether or not we accomplished anything.

This is the first time we really get a sense that Bob’s Burgers’ burgers may actually be good, and that Bob isn’t just skilled at what he does, he enjoys it so much that he considers working in an office to be his biggest nightmare. That changes the whole show somehow — Bob is mostly seen as being the harried, put-upon center of this weird family and flailing business, but it’s even easier to root for him knowing why he cares so much. Sorry, that’s not really a question. But if you could somehow speak to this, it’d really bail me out, I’ve gone too far to turn back now.
Steve, a lot of us are worried about you lately. You’ve been kind of frazzled and distracted and it’s pretty clear that something is up. Don’t get me wrong, you look great. You just act weird.

Carne asada is beef?
Yes. Unless you’re going to Taco Bell. In which case, it’s made of confetti, hair gel, and saliva. I like that they put a taco inside a Dorito. #Science

Would you draw us a caricature of Bob’s mustache really giving it to a caterpillar? Our office walls need a little something.
We couldn’t do that, but the artists here at Bob’s Burgers are endlessly talented and they probably could. Perhaps let them know when you get an advance copy of the new Jars of Clay album.

Do you think all classic cinematic torture scenes could be improved or intensified with the threat of wet-willying?
TRUE story: a week ago, the actor Michael Madsen got dropped off outside of our offices by accident on his way to record audio for a totally different project. He was standing out there for a while on his cell phone trying to figure out what the hell happened. Eventually we figured we had to do something, so our creator Loren Bouchard went out there and told him we had recently animated an homage to Reservoir Dogs. Madsen can be an intimidating guy, so we weren’t totally sure how that was gonna go. But it all worked out fine and he agreed to voice one line for us in the episode (as Kevin Costner in Tin Cup). When we showed him the animation, he chuckled a little and shook his head at the coincidence. Basically, from now on we’re just gonna keep our eyes peeled for random talent that lands on the street outside our offices. (Michael Madsen Fun Fact: he had never eaten a Girl Scout Thin Mint until that day!)

Why is it that the clandestine signing of a birthday card the single most existentially devastating thing a human being can be involved with?
Do you remember the episode of The Wonder Years when Winnie signed Kevin’s yearbook and all she wrote was, “Have a neat summer?” That was heartbreaking.