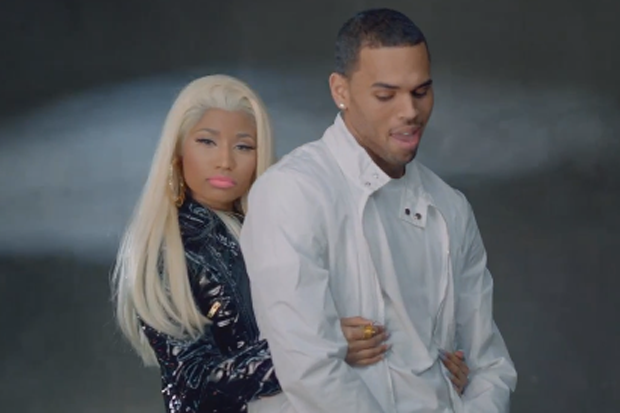 If Nicki Minaj wanted to sum up the divide that tends to frustrate people about her Pink Friday: Roman Reloaded, she could hardly have done it more clearly than in her latest video. As SPIN’s No Trivia blog noted recently, the album goes straight from a Nas verse on towering posse cut “Champion” to fluffy Chris Brown hook-up “Right by My Side,” a jarring transition that shows the artist’s shift from “Old Nicki” to new Nicki in its least favorable light. It’s only fitting, then, that Minaj’s new “Right by My Side” video finds the two competing for her affections.

Directed by Benny Boom, who also oversaw the visuals for “Beez in the Trap,” this one is a brightly lit romance, with lots of shots of a blonde Minaj letting Nas buy her nice things while Brown tries to get her attention. Sadly, Nas doesn’t rap here, so we’re stuck with lots of not-great acting up until a final, hot-and-heavy makeout session in the moonlight — which Minaj interrupts to flash a wonderfully weird look at the camera. Spoiler alert: She’s smooching the right guy, but that doesn’t make this song’s lightweight incarnation of new Nicki any more compelling. As great as Roman Reloaded can be, it’s still a shame Minaj didn’t dump this one a little sooner.