Michael Jackson to Appear on One Billion Pepsi Cans

Soda company announces promo campaign around the 25th-anniversary of 'Bad' 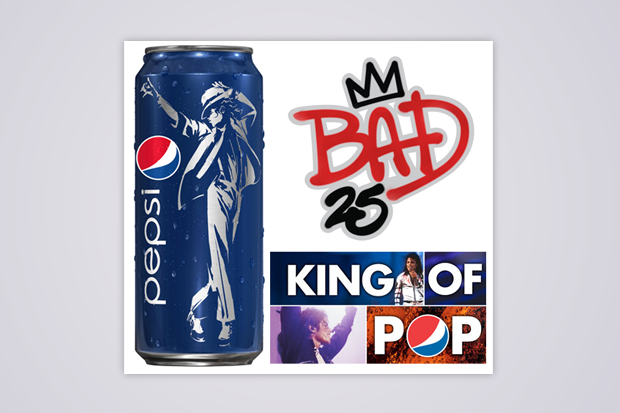 Some iconic artists get holograms when they die. Others get a billion soda cans! PepsiCo announced yesterday that Michael Jackson will once again grace the soda’s advertising arm, in the form of his aluminum image on (literally) one billion Pepsi cans nationwide, in honor of the 25th anniversary of his Bad album and tour, during which he also promoted the soda, back in 1988. (For the record, MJ might get cans and holograms.)

According to EW, the cans are part of a bigger campaign by the soda company surrounding the anniversary that will also entail events and music, as well as “special edition merchandise.” The executors of Jackson’s estate, John Branca and John McClain, say they hope to “perhaps [celebrate] a Guinness record” (a billion is a lot of cans — don’t forget to recycle, folks).

The MJ announcement is just one in a string of recent Pepsi branding deals. They’ve hooked up with Katy Perry for her upcoming 3D flick and with Nicki Minaj for her Jetsons audition a commercial campaign. A whole new Pepsi generation, it would seem! See you in three years for those limited edition MC Hammer cans!