El-P Performs Fiery ‘Stay Down,’ Shouts Out MCA on ‘Letterman’ 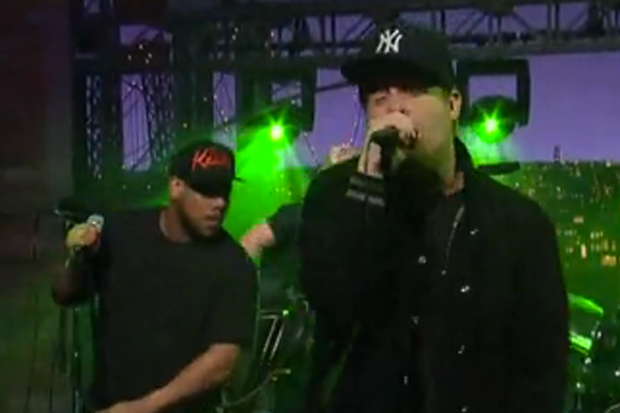 El-P’s visit to Late Show With David Letterman last night could hardly have arrived at a more auspicious moment for the skronky New York hip-hop stalwart. The same day also saw the release of R.A.P. Music, the tremendously inspired new album by Atlanta rap veteran Killer Mike, which El-P produced. This coming Tuesday, the former Definitive Jux label head will issue his own first non-instrumental album in five years, Cancer for Cure, on Mississippi-based indie Fat Possum. “I feel like I’ve been given yet another chance to do what I love to do, and maybe I don’t deserve it,” El-P says in the latest issue of the Village Voice. “But this is a rebirth record for me.”

That born-again fervor came across in El-P’s fiery performance of Cancer for Cure’s “Stay Down,” with Islands’ Nick Diamonds on hand to reprise his vocals and synth work from the album track. A live band helped El-P convey the honking, off-kilter gloom of the studio version, while his verbal barrage was every bit as intense as on record. “Rest in peace, MCA / Rest in peace, Maurice Sendak,” he interjected at one point. And then he took off his New York Yankees cap, and leaned in harder. “I loved it!” exhorted Paul Schaffer at the end. “El-P! In the house!” He doesn’t look like he plans on leaving anytime soon (via the Audio Perv).