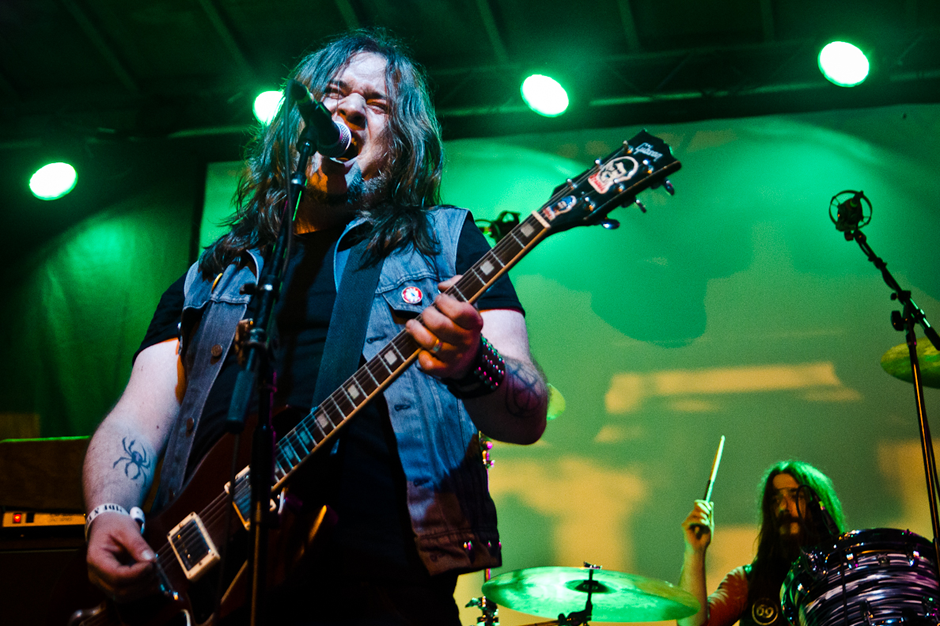 Maryland Death Fest, America's premiere extreme music event, started out in 2003 as a narrowly focused death-metal blowout, but the curators have since widened their scope immensely. Last weekend's tenth installment featured more than 60 acts spread across three stages, encompassing classically styled doom (Electric Wizard, pictured), corpsepaint-heavy black metal (Tsjuder), primitive punk-thrash (Hellbastard) and technically demanding death metal (Suffocation), as well as a healthy assortment of wild cards (alt-metal legends Godflesh, noise-punk heroes Unsane and even the mighty Anvil). Groups came from as far away as Japan, Finland and Chile, and the fan pool was just as diverse: dreadlocked crusties, thick-necked bodybuilder types, denim-and-spikes hessians, pierced ladies in ripped fishnets, the odd clean-cut couple and the omnipresent Dude in a Chicken Suit. Still, a communal vibe prevailed — even in the mosh pits, you'd see one guy flatten another and then help him back to his feet. The parade of deafening performances asked a lot of MDF's attendees… but rewarded them handsomely in return. Captions by Hank Shteamer

Maryland Death Fest, America's premiere extreme music event, started out in 2003 as a narrowly focused death-metal blowout, but the curators have since widened their scope immensely. Last weekend's tenth installment featured more than 60 acts spread across three stages, encompassing classically styled doom (Electric Wizard, pictured), corpsepaint-heavy black metal (Tsjuder), primitive punk-thrash (Hellbastard) and technically demanding death metal (Suffocation), as well as a healthy assortment of wild cards (alt-metal legends Godflesh, noise-punk heroes Unsane and even the mighty Anvil). Groups came from as far away as Japan, Finland and Chile, and the fan pool was just as diverse: dreadlocked crusties, thick-necked bodybuilder types, denim-and-spikes hessians, pierced ladies in ripped fishnets, the odd clean-cut couple and the omnipresent Dude in a Chicken Suit. Still, a communal vibe prevailed — even in the mosh pits, you'd see one guy flatten another and then help him back to his feet. The parade of deafening performances asked a lot of MDF's attendees… but rewarded them handsomely in return. Captions by Hank Shteamer 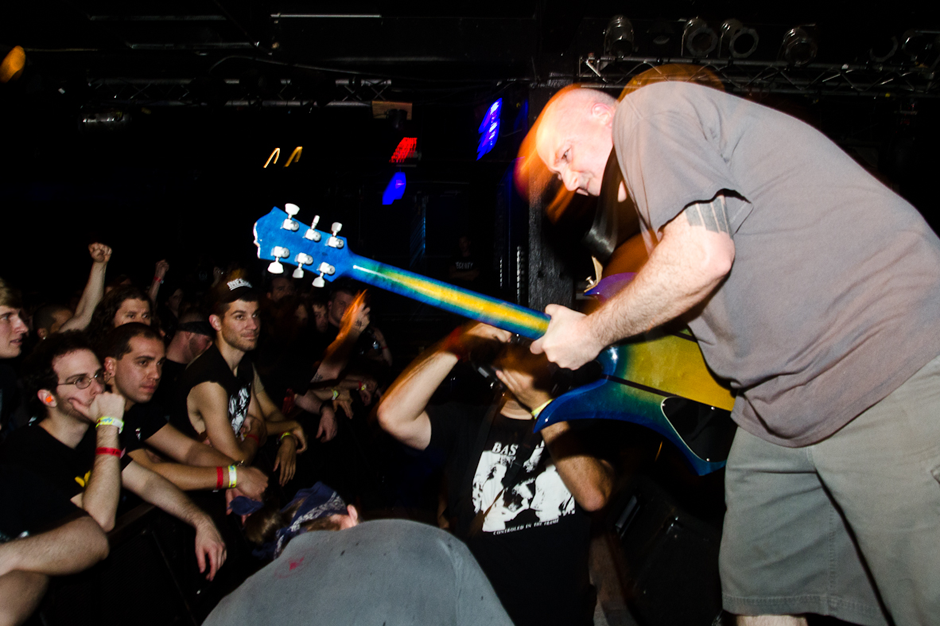 Thursday's bill got serious in a hurry when Rorschach hit. The reunited Jersey quintet served up old-school hardcore vitriol with a side of heady delirium — like extreme punk gone insane from wandering in the desert. Guitarists Keith Huckins and Nick Forte traded queasy grooves as the rhythm section navigated the songs' jagged accent clusters and weird textural excursions. Vocalist Charles Maggio paced the stage, huffing and puffing before each shredded-throat outburst. The band's malaise has clearly ripened over the years, and here, it spread like poison gas. 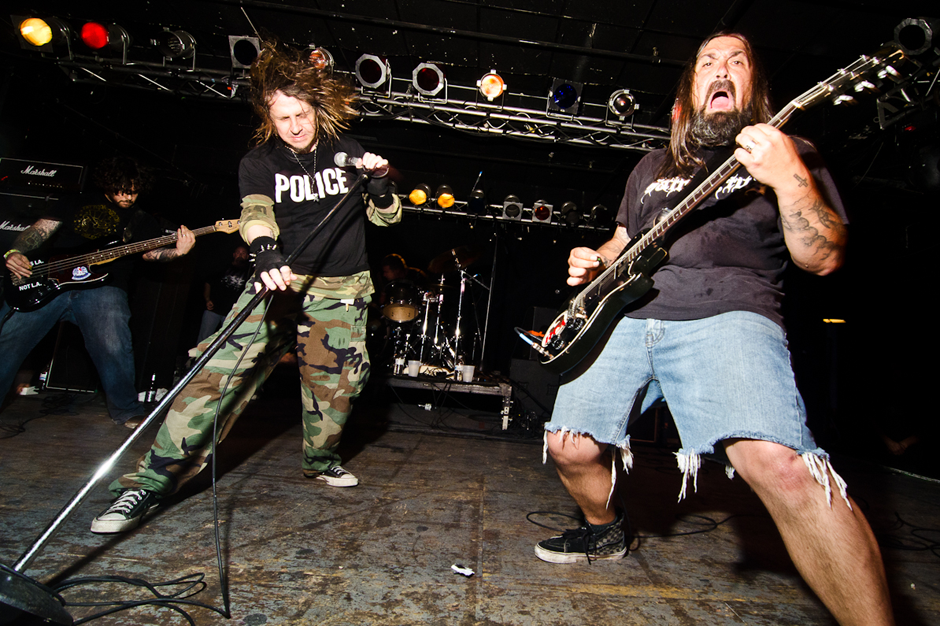 Few bands conjure a more feral vibe than NOLA institution Eyehategod, who lived up to their fearsome reputation and then some. The band began with a whining wall of feedback, playing a staring contest with the crowd (and each other) before launching into a lean set of crust-caked doom-blues. "I fuckin' love you guys, man," ragged frontman Mike IX Williams professed, and the crowd repaid the compliment with a full-floor pit. When the quintet ran up against time constraints, they just dug in, rebuilding the feedback wall. Drummer Joey LaCaze gestured toward the ceiling before bashing a final downbeat, as if to thank God for being such a good sport. 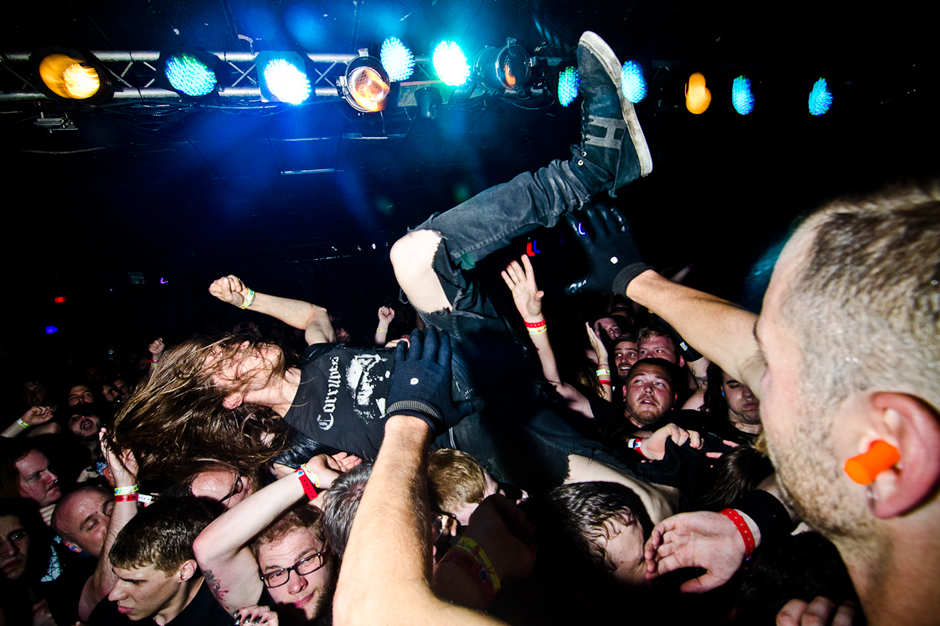 If you weren't in harm's way during Eyehategod's set, you missed out. 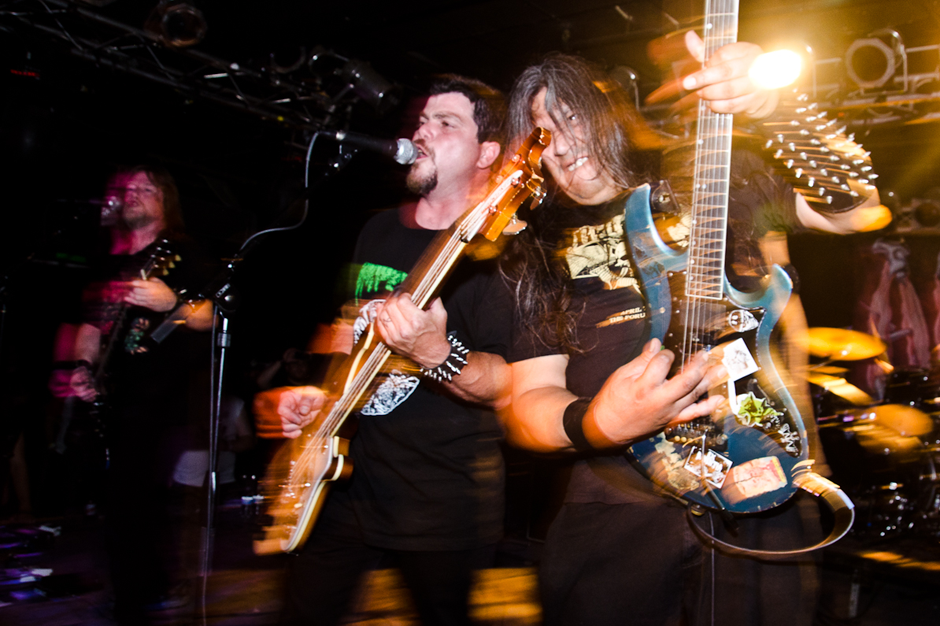 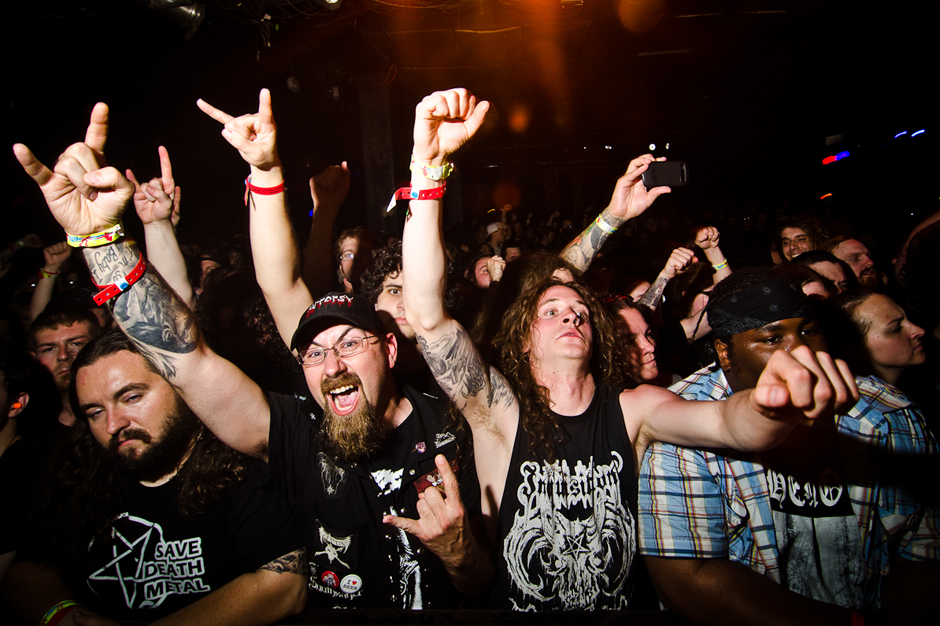 8.Thank You For Smoking 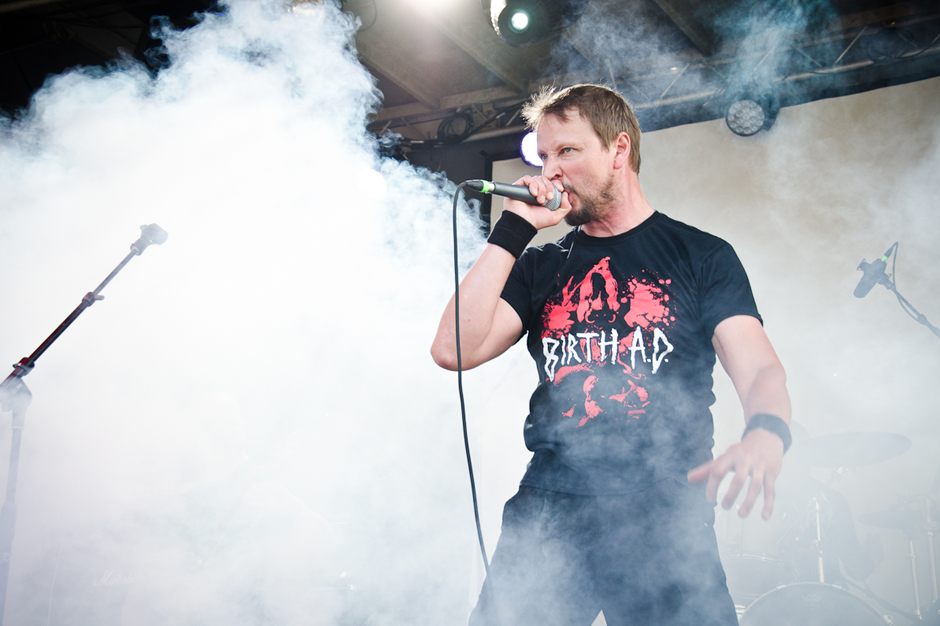 Demigod, a Finnish band whose frontman, Esa Linden, has the trim, clean-cut look of a pro tennis player, played a frill-less afternoon set on Friday, proving that death metal and broad daylight make for a surprisingly winning combo. Like many at MDF X, Demigod kept it retro, drawing much of their set from 1992's Slumber of Sullen Eyes. Despite the downer title, it's a record crammed with muscular blast beats and groovy half-time breakdowns — all of which sounded gloriously gruff live. 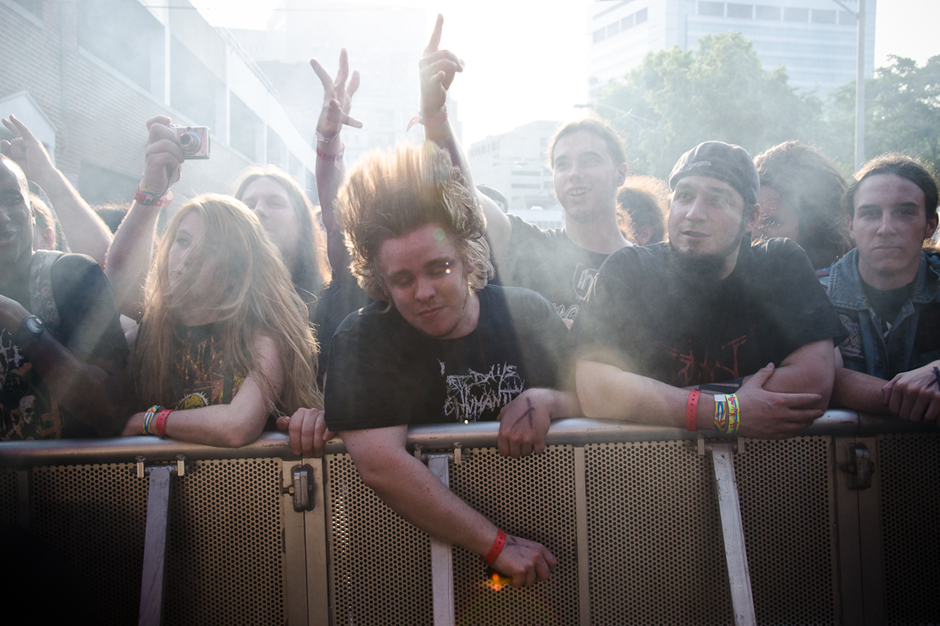 The fest's faithful 'banged every bit as hard during sunny hours.

10.There Will Be Fake Blood 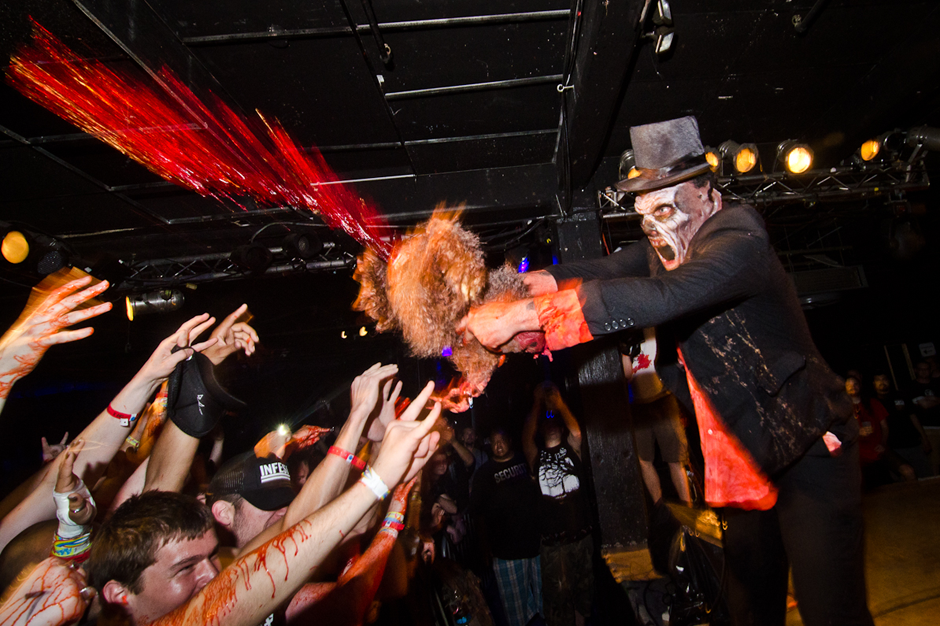 Along with fellow Friday performers Macabre, Ghoul were the class clowns of Deathfest, offsetting their flawlessly executed death-thrash with a thickly applied shtick. They hail from the country of "Creepsylvania," goes the self-invented myth, and they're here to brutalize you, or at least douse you in "blood" spurting from the neckhole of a decapitated fake chicken. Fortunately, these hooded menaces possess enough chops to back up the goof. 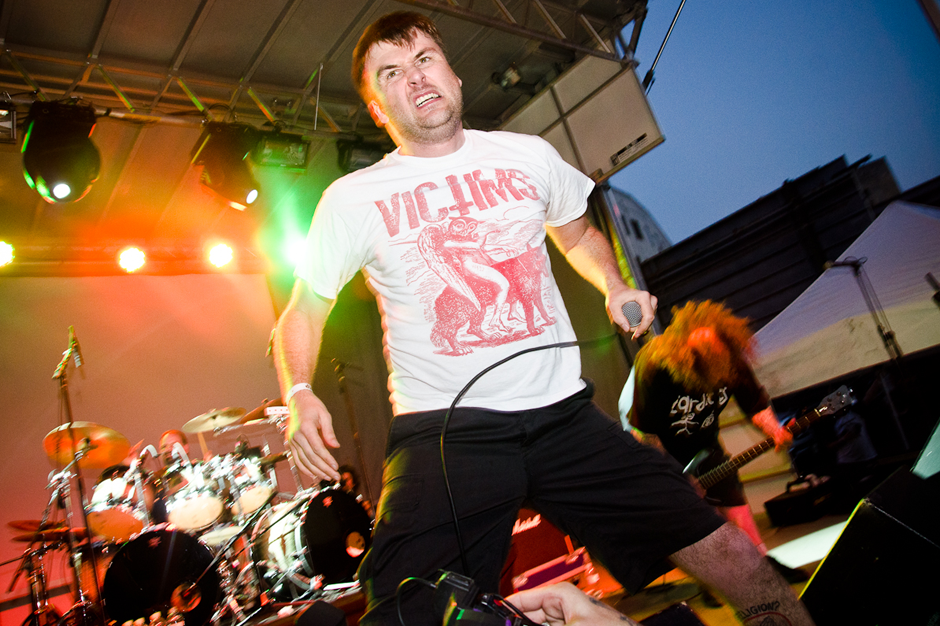 Whatever the opposite of crowd control is, Napalm Death gave a master class in it during their outdoor set on Friday night. The British grindcore legends turned the street into a full-on melee, like something out of The Warriors, as they surveyed their two-plus-decade career, from 1987's Scum (source of the one-second-long "You Suffer," played near the end) to the new Utilitarian. Frontman Barney Greenway suggested a cross between a psycho gym teacher and Cosmo Kramer opening a door, throwing elbows at invisible moshers as he stumbled around the stage in a gangly frenzy. 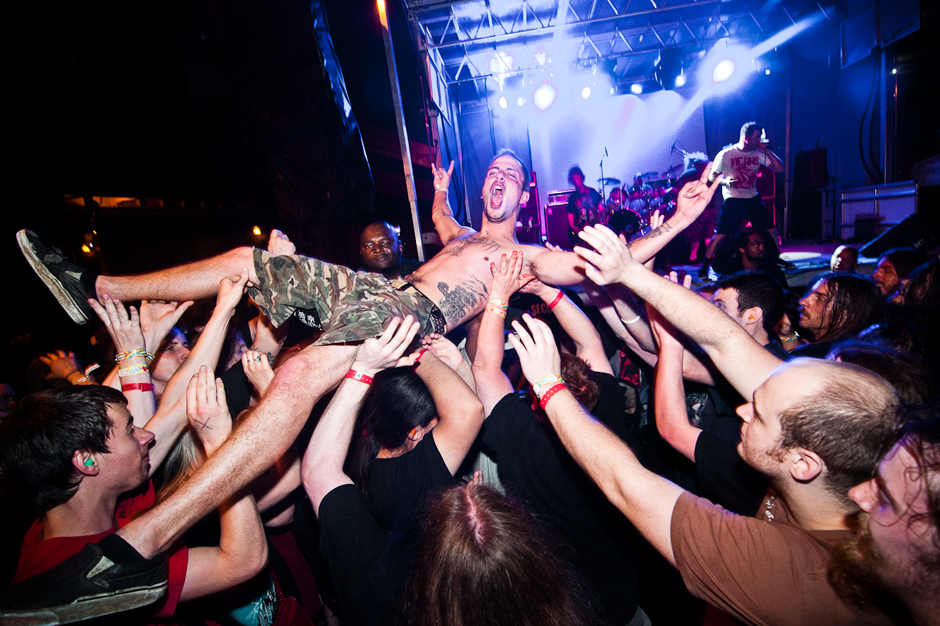 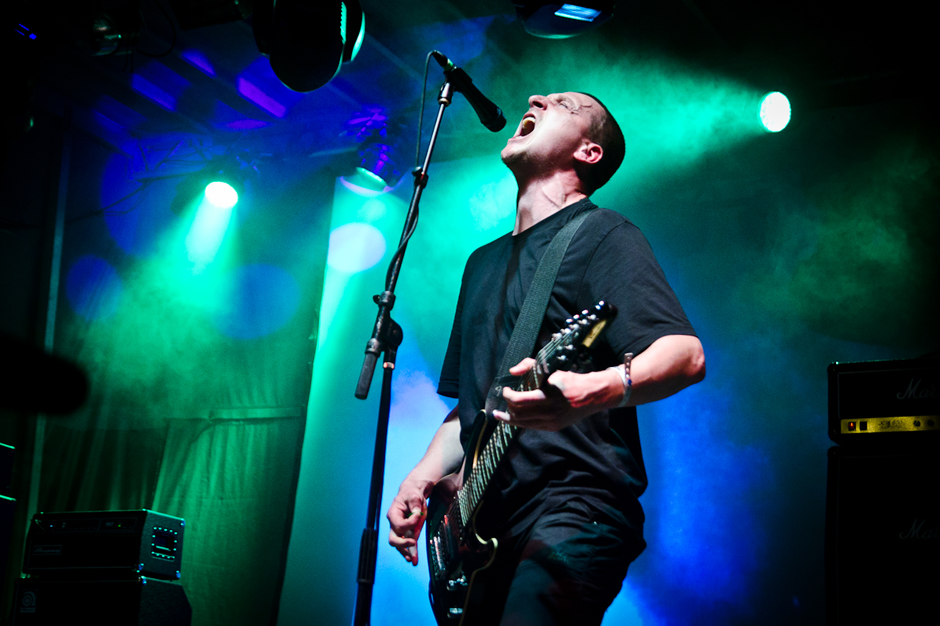 No band received a warmer MDF welcome than the duo of Justin Broadrick and G.C. Green of legends Godflesh. Mass fist-pumping and hippie-ish boogie-ing ensued as soon as the band's trademark vintage-drum-machine beat kicked in. Those who thought Broadrick's post-metal days in Jesu might have mellowed him were swiftly disabused, as the frontman roared out apocalyptic chestnuts, including a generous helping from 1989's Streetcleaner. Green was an unflappable presence on bass, locating the hidden funk buried beneath his rumbling distortion; meanwhile, his partner awed with corrosive guitar squeals, a welcome contrast to the more traditional shredsmanship that dominated the fest. 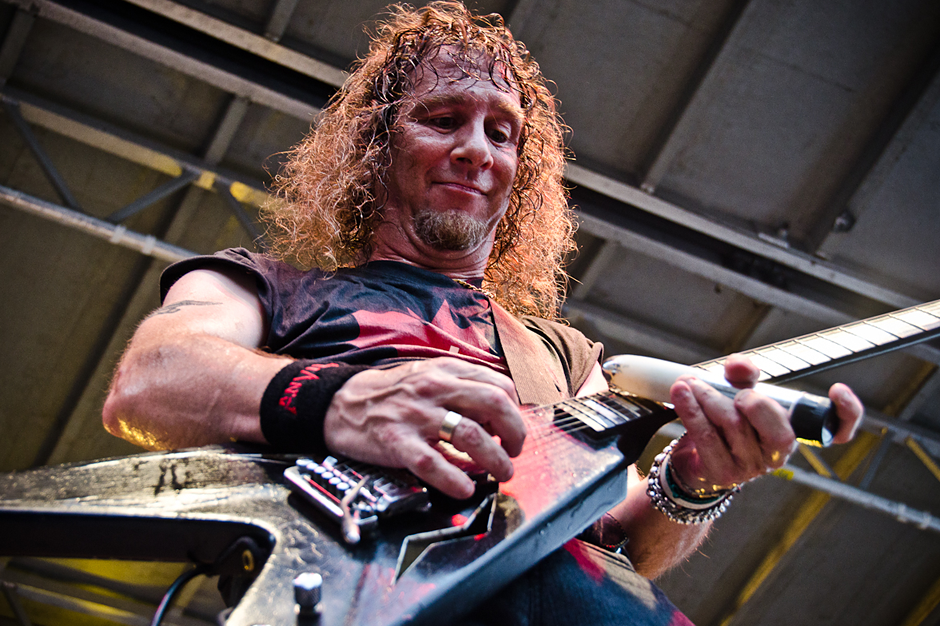 From a distance, Anvil seemed like the odd band out at this year's Deathfest. But their insanely charismatic afternoon set illustrated the genius of MDF's eclectic booking policy. The lovable Toronto trio — stars of a must-see '08 documentary — played outdoors immediately after British crust-doomies Deviated Instinct and quickly flipped the mood to "Party" with their timeless trad metal, a good-time potpourri that spans the Priest-to-AC/DC spectrum. Stick-flipping drummer Robb Reiner and poufy-maned singer-guitarist (not to mention vibrator-slide pioneer) Steve "Lips" Kudlow remain a dream team onstage, combining bar-band unpretentiousness with flashy '80s-style virtuosity. "Thanks for makin' my dreams come true, man," said Lips, signing off with genuine everydude graciousness. 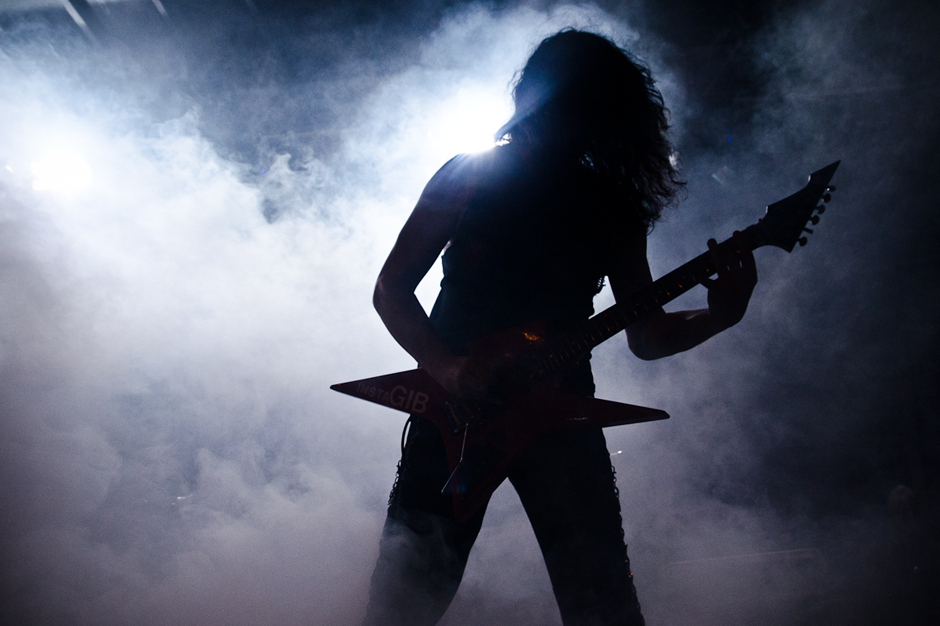 Morbid Angel's Saturday night outdoor gig, the culmination of the fest for many, wasn't without its awkward patches. First, an unfortunate guitar tech had to nurse an ailing amp after the intro music had already begun. Then, a steamroller of a set focused on Morbid Angel's 1989 masterpiece, Altars of Madness, ground to a halt as the band took some time to air tracks from their latest album, the widely reviled Illud Divinum Insanus, promptly losing the crowd's favor in the process. Finally, guitarist Trey Azagthoth — who had previously blazed through a space-time-warping, whammy-abetted unaccompanied solo — left the stage after breaking a string on the second-to-last song, and elected not to return. Despite all this, Morbid Angel proved here why many consider them to be death metal's greatest practitioners. There's a rock-god aspect to frontman David Vincent and the rest of these larger-than-life icons, and that pose would be insufferable if their songs weren't so damn good. Simply put, Azagthoth's riffs constitute the gospel of death metal, and the entire pit responded to every gnarled contour. 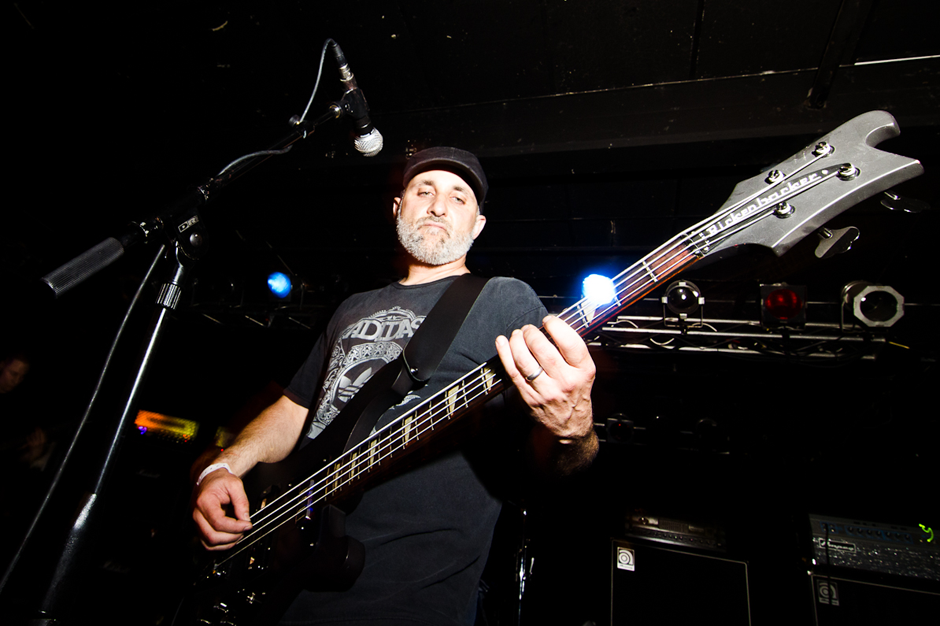 Programming Winter as the closing band of Saturday's lineup was some kind of sadistic masterstroke. The recently reunited NYC trio's crawlingly paced doom, topped by bassist John Alman's agonized growl, came on like a megadose of Valium, just when festgoers most needed a pick-me-up. But the late-night setting proved to be a perfect fit for the consummately bleak dirges from 1990's Into Darkness, which incited the world's slowest mosh pit — like a mini-convention of lumbering zombies. 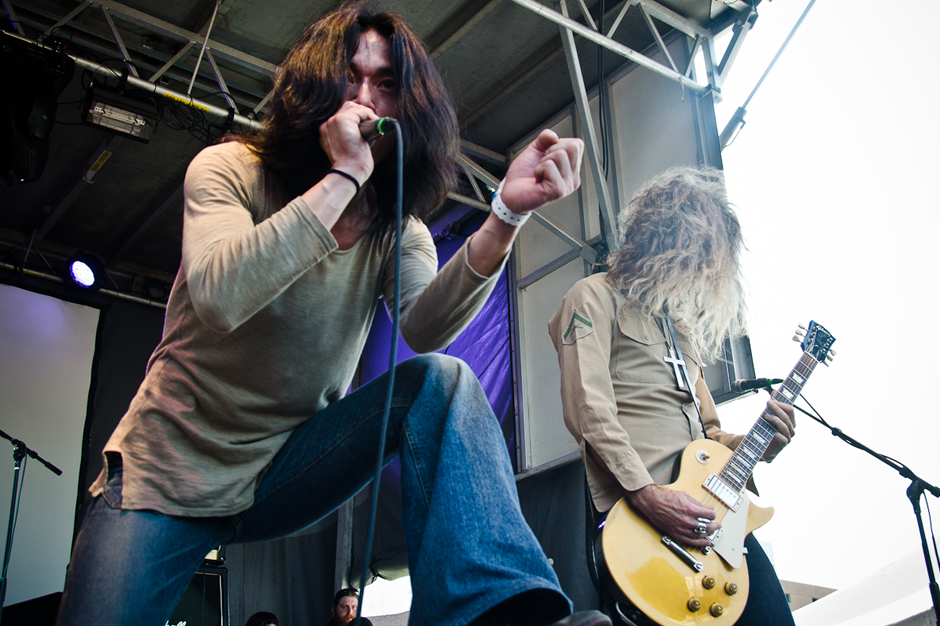 Church of Misery turns a goofy on-paper premise — Japanese hippies do Sabbathy doom with serial-killer-fixated lyrics — into something sublime. Like their countrymen High Rise and Acid Mother's Temple, the Church push psychedelia way over the top, making their vintage moves seem downright surreal. They brought a nasty swagger to an afternoon set on Sunday, inspiring rampant weed puffing and slo-mo headbanging. Flowy-shirt-clad singer Hideki Fukasawa showed off his best Robert Plant moves in between his synth-generated noise blasts and gravelly roars, while the band stretched out its grooves like patchouli-scented Silly Putty. 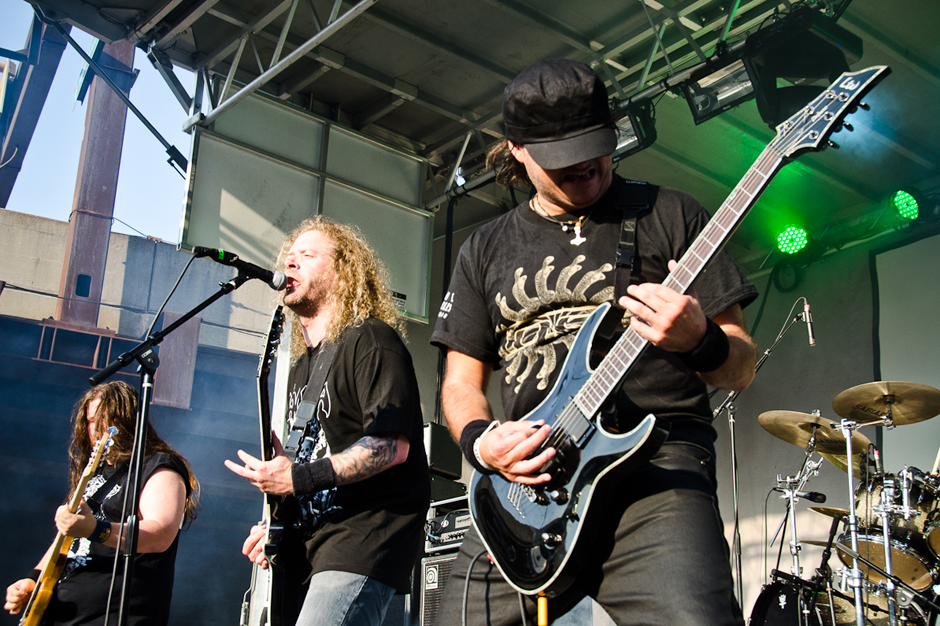 Word spread quickly in the opening hours of MDF 2012: "Dude, this Pentagram is not the veteran doom band." It was a helpful distinction, since that Pentagram, an American Sabbath contemporary, played the fest just two years ago. This Pentagram, a Chilean death-thrash band founded in the mid-'80s, was a much harsher proposition. The quartet played one of Sunday's most memorable sets, a stripped-down clinic in the art of old-school aggression, marked by countless bullseye mosh riffs and surprisingly soulful solos from frontman Anton Reisenegger. 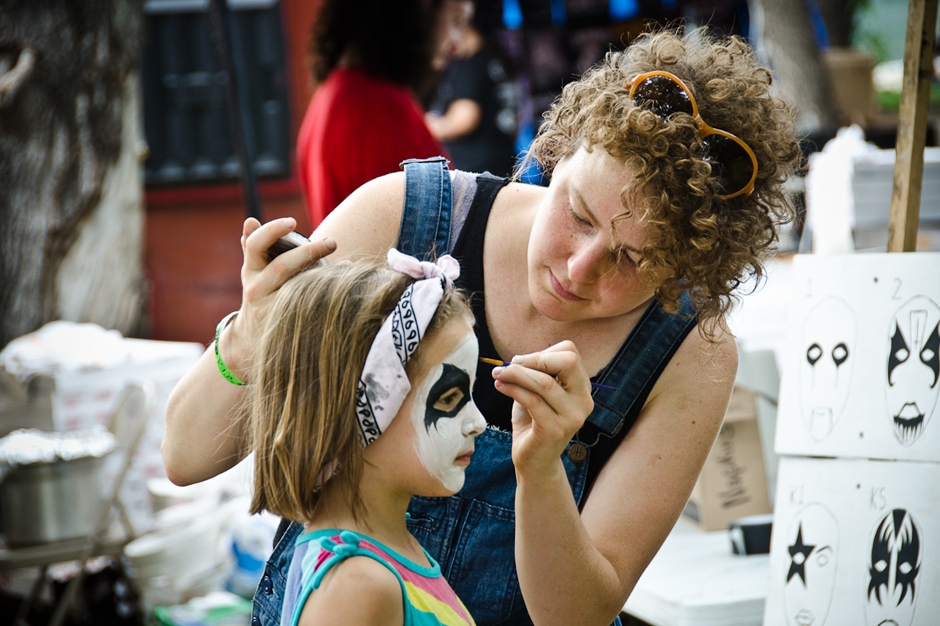 Deathfesters of all ages took advantage of the conveniently located corpsepainting station. We hear a family-friendly church-burning workshop is planned for MDF 2013. 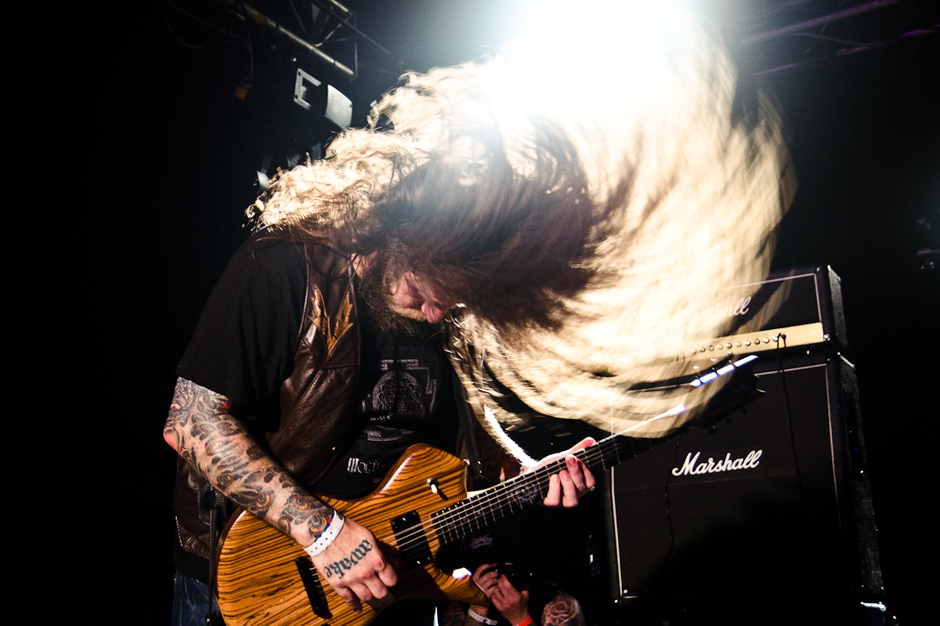 Yob packed the indoor stage on Sunday, their psych-doom epics suffusing the air like so much bong-expelled smoke. The Eugene, Oregon, trio's rhythm section was in mightily swinging form, propelling Mike Scheidt's wah-drenched guitar and strangely elastic yowl. During a fest at which amped-up speed trials prevailed, Yob's soul-deep devotion to the downtempo churn stood way out. 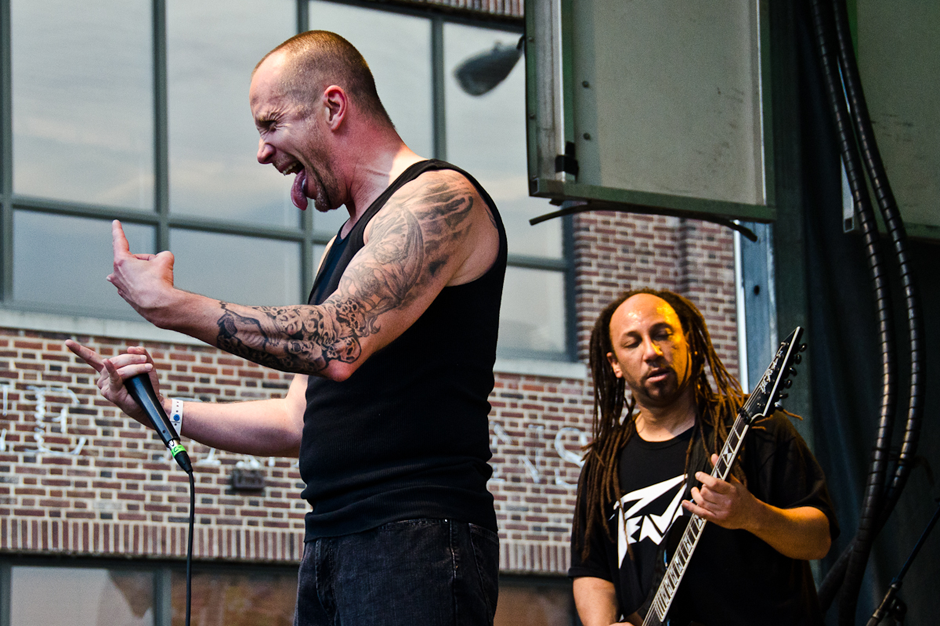 Given the recent departure of core member and blast-beat god Mike Smith, Suffocation's set seemed like an iffy proposition. But the veteran NYC death-metalists dispelled doubts with a mind-bogglingly tight evening set on Sunday, drawing heavily from vintage LPs like 1991's Effigy of the Forgotten. Warp-speed technicality alternated with mosh-friendly slam-bang, as frontman Frank Mullen — helpfully miming every drum fill and guitar squiggle — kept pace with his vomitous bark. Between songs, Mullen indulged in rambling monologues on the futility of religion, corpse disposal via woodchipper and the awesomeness of the MDF lineup, each point prefaced by an affable "My friends…" 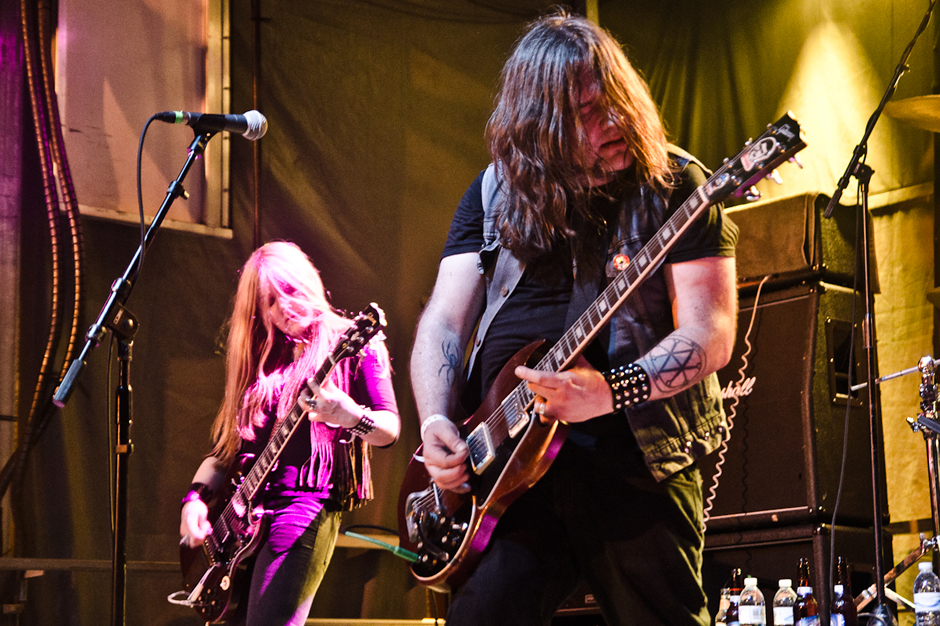 Capping a slo-mo Sunday that also included Church of Misery, YOB and the consummately grizzled Saint Vitus, Electric Wizard presented expansive riff odysseys during their first U.S. gig in more than a decade. During that interim, Sunn O))) and their contemporaries have done much to art-ify the doom subgenre, but this U.K. quartet — centered on husband-and-wife guitar tandem Jus Oborn and Liz Buckingham — opts for a more primal approach, steadily riding its grooves like outlaws on horseback. A light evening rainstorm set the mood for the Wizard's 70-minute trance-out, bestowed on a huge, grateful crowd. 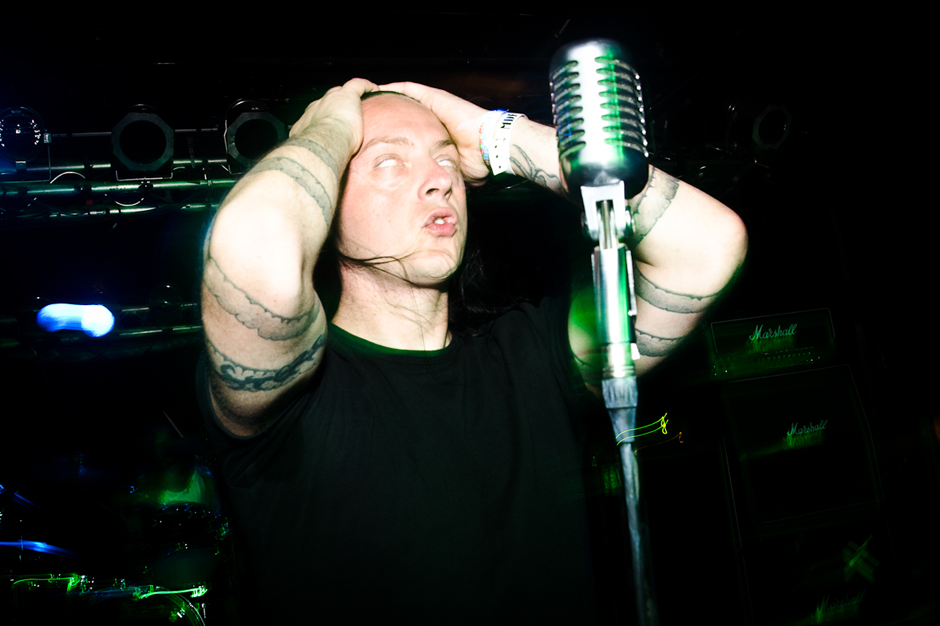 "Welcome to the asylum," said Bethlehem frontman Rogier Droog early in the band's Sunday-night set, easily MDF X's spookiest and most transporting. You didn't need to be up on this German band's long, convoluted history to get carried away by their masterful performance. The key concept here, missing from many other gigs at the fest, was dynamics: Midtempo black-metal fury alternated with mournful clean-guitar passages, lending the set an alluring gothy edge. Droog found just the right register for every episode, from tortured screams to what sounded like a despondent lunatic's tearful blubbering.

24.Scream of the Crop 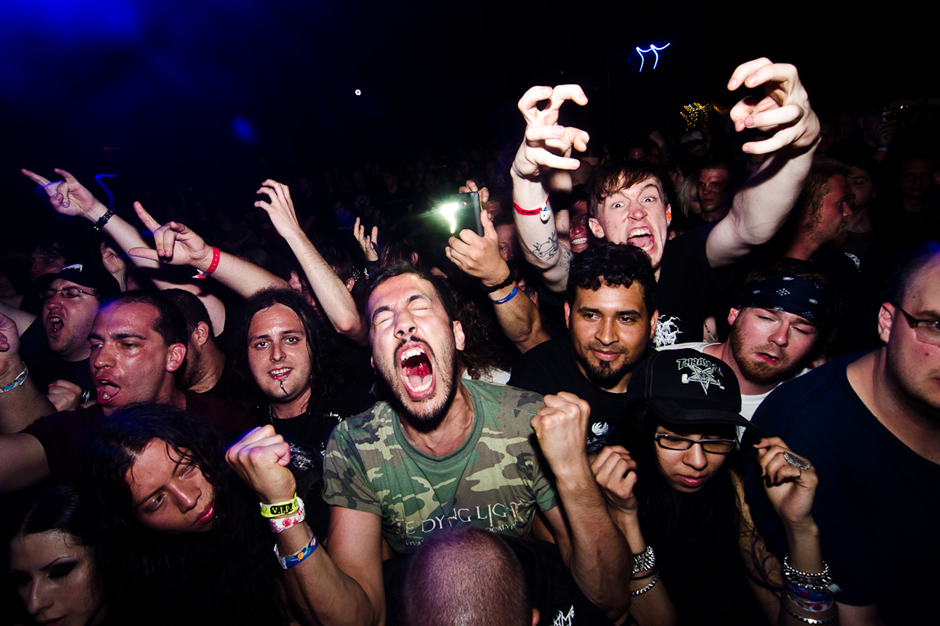 The front row never lagged when it came to echoing Bethlehem's onstage intensity.