Billboard Music Awards 2012: Everything You Need To Know About Last Night’s Ceremony

The Billboard Music Awards (or BBMAs), which were revived last year after a four-year hiatus, are the real People’s Choice Awards — with the exception of the occasional editorial call, winners are selected based on hard data mined from Billboard’s charts over a year period. In other words, you bought this music, people, and last night at Las Vegas’ MGM Grand, the artists reaped the prizes. That means it’s no surprise that Adele, who also led the pack when finalists were announced, snagged the most, taking home 12 of the 18 she was up for, including Top Artist. Her impressive haul doubled the second-place finisher, LMFAO, partially because the British singer, like Coldplay, dominated more than one genre’s categories (pop and alternative, whereas Chris Martin and Co. also hit the alternative and rock formats).

With the winners sort of a fait accompli, the real drama at the BBMAs came from tributes and performances by basically every charting artist imaginable, including, controversially, Chris Brown. Stevie Wonder received the Billboard Icon Award and performed alongside Alicia Keys, while Taylor Swift was awarded the Woman of the Year prize, which Billboard totally has never done before. Whitney Houston was remembered with a Millennium Award (the one Beyoncé won last year) and honored with a performance by John Legend and Jordin Sparks:

Beastie Boys’ Adam “MCA” Yauch was honored by Cee-Lo and Goodie Mob with “Fight to Win” and “Fight for Your Right”: 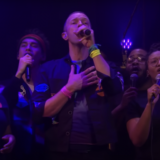 Surprise performers Linkin Park (who, incidentally, also paid tribute to MCA with a cover of “Sabotage” at their L.A. show Friday night) returned to the limelight as the only rock act of the night, with their dancey new track “Burn it Down” from their new album Living Things (which they chatted about with SPIN recently):

The show was opened by LMFAO, because obviously:

Carly Rae Jepsen provided a bubblegum-pop performance of “Call Me Maybe,” which we’d like to think took cues from the colored balloons of Arcade Fire’s unforgettable 2011 Coachella set:

Usher gave us an über-theatrical, Kingdom Hearts-y presentation of the second single from his forthcoming record Looking 4 Myself, “Scream”:

And of course Justin Bieber blessed us with a crotch-grabby (?!), Kanye-meets-boyband performance of “Boyfriend”: