“We’d looked at a few places to make this record… big houses in strange neighborhoods,” says Liars’ Aaron Hemphill, sleepy-eyed under a short mop of bleached bedhead. “But we wanted something more compact and remote. Finally the woman showing us around says, ‘Well, I’ve got this place under the freeway, but it doesn’t have any windows.’ We were like, ‘Perfect.'”

We’re sitting in the band’s unusual studio in a forgotten corner of Los Angeles, where they recorded their sixth studio album, WIXIW — pronounced “wish you,” due out June 5. From the outside, it doesn’t inspire confidence. The triangular lot includes an ominous cell phone tower, a tiny but heavily guarded pot dispensary, and a corner store whose gravitational pull has amassed a sizable collection of satellite drunkards. One edge disappears entirely under the smog-spewing U.S. 101. But on the other side of their metal door, Liars have constructed a bunker for art and experimentation.

There are three offices inside — one for each — a small sleeper, a kitchen and a communal space offering a hundred different ways to subvert mainstream sensibilities. One wall is covered with album art ideas. The opposite is hung with a swatch of green felt faced by a tripod. Next to our ash-strewn folding table is what looks like an ammo box filled with hardened black wax — a jury-rigged double boiler, explains Julian Gross. 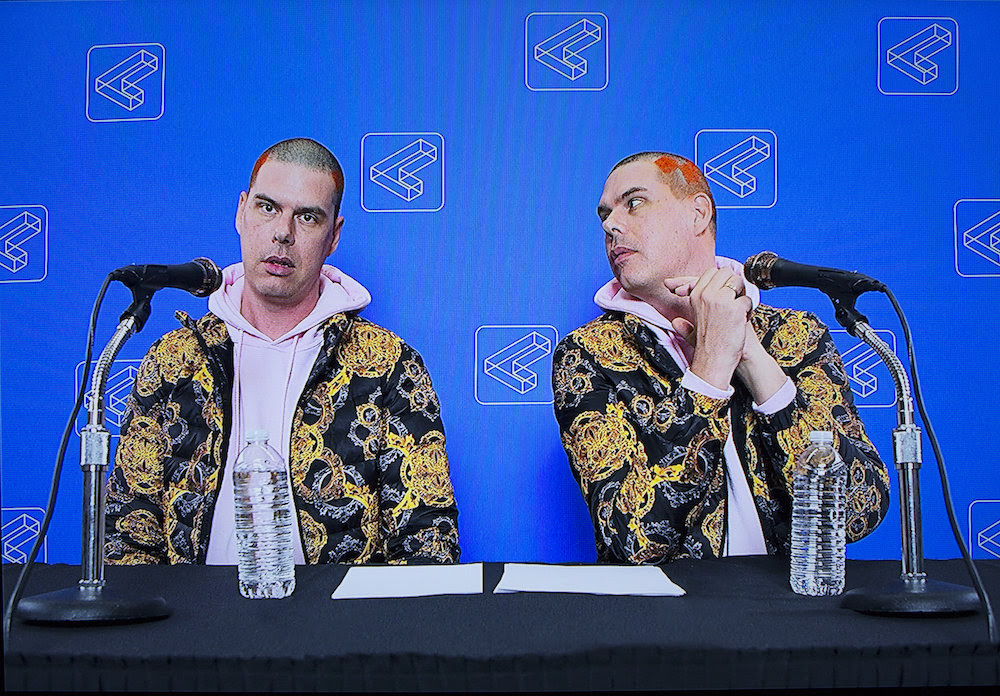 As it turns out, this is phase two: where the album was finalized and the disinformation campaign began. As Liars worked on WIXIW they faithfully maintained a Tumblr supposedly documenting their process, beginning with a fake location several miles east of their actual studio. They posted photos of the decoy building, and video of sound experiments that blurred the line between fact and fiction. Wet rags dripping onto corrugated tin? Sure. An apple hotwired to a tape machine? Maybe. But a stack of books osmosing snippets of audible text into a microphone? Preposterous… right?

Vocalist Angus Andrew laughs. “I like having people think about what was possible, what was used on the album, and what was completely fabricated. In a way, I hope it’s inspirational. Like, ‘Could you do something like that?’ None of us are interested in seeing a still shot of us in a mixing room with our hands on knobs.”

In truth, WIXIW began on laptops in a cabin 90 minutes to the north, in a mountain town called Frazier Park. “Angus and Aaron lived there,” says Gross. “I would drop off food and beats. Provisions. Keep ’em going.” For each of their previous albums, Andrew and Hemphill worked separately, then brought songs to the band when they were nearly done. They wanted to get out of their comfort zones, get uncertain.

“With every record we need to try something we haven’t yet established as a mode of working,” says Andrew. “That’s what keeps us interested. I’m completely envious of people who can stick to a specific method, just be a band in a room like the Hives or something, but that’s not our nature.”

They changed up the medium too. Inspired by “wobble bass” and the panoply of EDM, Liars worked with beat programs for the first time, supplementing their analog experiments with digital sound design.

“On [2010’s Sisterworld] we were all about trying our hands at songwriting,” Andrew continues. “The craft of just sitting with a guitar, or at a piano, for hours trying to develop a melody. But we spent even longer on this one, about a year just playing with sound. You know, what does it sound like if we sing underwater? If we don’t try that, am I going to feel like we short-changed ourselves?”

It paid off. For all of the limitless options that the software brought, all of the playful subterfuge that became part and parcel of the process, and the general discomfort that the guys sought to produce every step of the way, Liars walked away with what may be the most enjoyable album of their career. WIXIW is lush with melody, shimmers with electricity, and even embraces the occasional four-on-the-floor beat. It also feels very personal, ditching the high lyrical concepts of past albums (witch trials, odd characters, dystopias) for lines about wanting love, shaking temptation and the treachery of wishing for things.

“You automatically put yourself at a disadvantage if you’re wishing for something and not actually doing it,” says Andrew. The concept is simple enough, though presented graphically as a single palindrome, it can literally be read two ways. In typical Liars fashion, the meaning gets muddy, open to interpretation. But that’s what this band does so well. “Of course we could write a straightforward song that’s very clear about these ideas, but I’m not sure how much people would want to invest in that,” says Andrew. “To me, interesting art allows you an obvious entry point, but doesn’t necessarily give you an easy exit.”

In The Studio, Liars