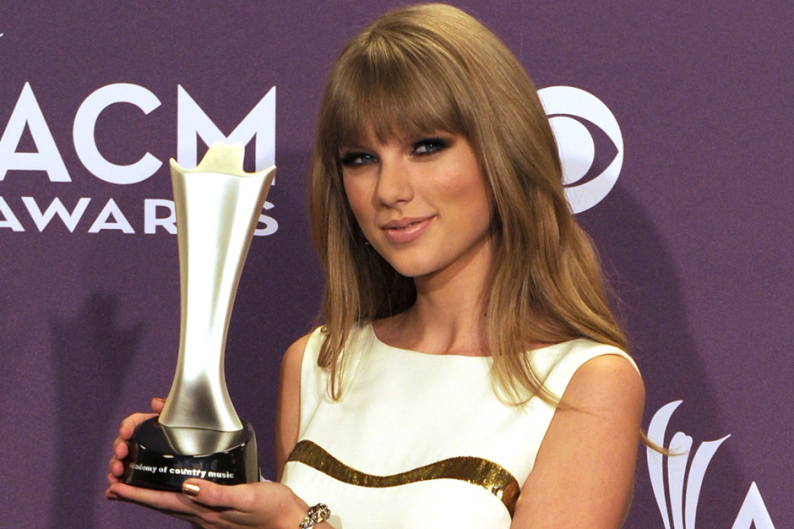 In a genuinely surprising turn of events, Taylor Swift was nearly upstaged by everyone’s favorite country act, KISS, at the Academy of Country Music Awards last night in Las Vegas. The quartet, who of course rolled up in a monster truck, stormed the red carpet in full makeup and told reporters that they love country music. The band even presented the probably-bewildered Lady Antebellum with their Vocal Group of the Year win.

But despite the unusual interruption, Swift owned the ACMs. The singer capped off one hell of a weekend (more on that below) by taking home the night’s top award, for Entertainer of the Year, and, as the Washington Post notes, looked barely phased at her win as she thanked fans and fellow competitors. She gave a shout-out to the New Jersey teenager battling cancer who asked the singer to his prom and got an invite to the ACMs instead. Kevin McGuire, 18, couldn’t make the ceremony, however, because he was hospitalized. Miranda Lambert also took home two awards (Female Vocalist of the Year and Album of the Year), while Scotty McCreery, of American Idol fame, won for New Artist of the Year.

Swift also had the risky job of attending and winning stuff at the extra-goopy Nickelodeon Kids’ Choice Awards, which held court in L.A. Saturday. It was worth it though, since First Lady Michelle Obama was there to honor the 22-year-old singer with the show’s annual Big Help Award. No sliming for pretty country singers (that was left for Justin Bieber and host Will Smith), but Mrs. Obama actually did manage to shock Swift by showing up to present the award, calling the singer, who has volunteered with the Make-a-Wish Foundation and donated to tornado and flood survivor funds, “someone who has rocketed to the top of the music industry but still keeps feet on the ground, someone who has shattered every expectation of what a 22-year-old can accomplish.” Next stop: political office! (We’re only half-joking.)