'Pink Friday: Roman Reloaded' clip is at once slow-moving and action-packed, mirroring the icily eventful minimalism of the album's gangsta-rap highlight 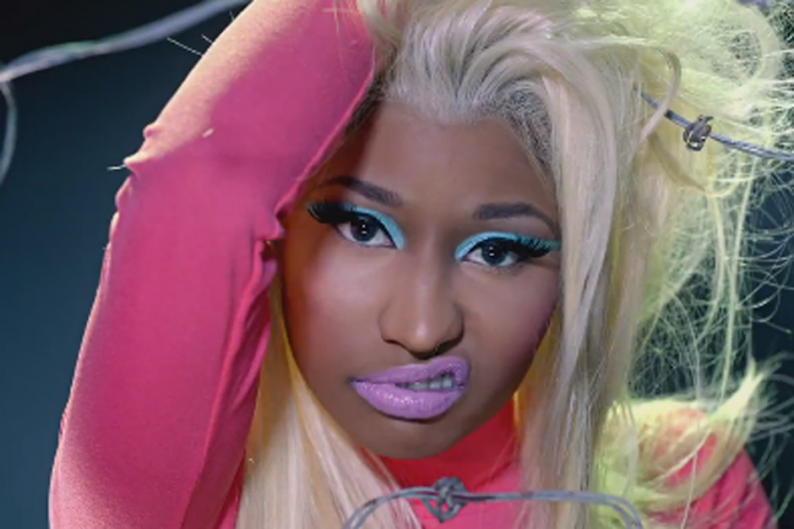 The video for Nicki Minaj’s “Beez in the Trap,” which our reviewer credits for “annihilating the rest of” the rapper-singer-superhero’s new Pink Friday: Roman Reloaded, works as a neat visual parallel to the track itself. Like the minimal but verbally assaulting club-rap throwback, which SPIN’s hip-hop blog described as “Nicki Minaj’s gangsta-rap record,” the clip is at once slow-moving and action-packed. There’s blonde Nicki the Barbie in pink leotard, squatting low and rapping from behind barbed wire; there’s green-haired Nicki the mermaid in a bikini throwing out hundreds at a strip club; and there’s raven-haired Nicki the mixtape MC in skimpy leopard print showing off her derriere as Atlanta’s 2 Chainz leeringly pays his respects. Just as director Benny Boom’s gritty video for Waka Flocka Flame’s gritty “Hard in Da Paint” creatively captured that song’s feeling of street-level machismo, these visuals manage to convey the complex hybrid of sexy pop starlet, gender-reversing artiste, and badder-than-the-boys MC that is Nicki Minaj. “A hundred motherfuckers can’t tell me nothing,” she sneers on the hook. No kidding.