Or something. He was probably making fun of us. 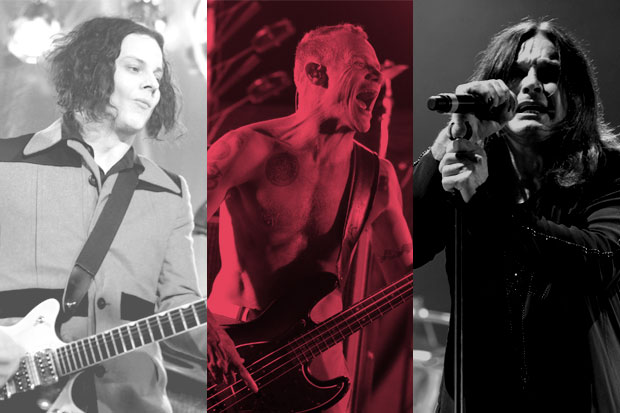 What’s black, white, and red all over? This morning, Lollapalooza officially announced their 2012 line-up, complete with the color-coded Crayola box daydream headliners of Red Hot Chili Peppers, Black Sabbath, Jack White, and the Black Keys (alas, Yellow Ostrich can only bring yellow sunshine on the undercard). We decided to be annoying dicks and ask Lollapalooza founder Perry Farrell about his tri-chromatic visions and he was happy enough to patronize us with some snappy answers to our stupid questions. Plus, we learn a little about his ever-ravey predilections and some avuncular reunion advice for At the Drive-In.

Was it intentional to pick three headliners that all have “black” or “white” or “red” in their names?
Yes, I intended on finding three groups that had to have the word “black” or “white” or “red” and I thought about it and I thought about it and it just hit me: Why not Black Sabbath, Black Keys, Red Hot Chili Peppers or Jack White? And they all said yes at the same time and then I went back to bed.

What do you think Avicii is bringing to modern dance music?
Well, my reason for bringing Avicii to Lollapalooza was, first and foremost, because he is on the cutting edge of dance music. I love the fact that he had the good taste to use Etta James and I absolutely love her voice and I love what he’s done with her voice. I also love the fact that although we have a group that is probably 40 to 50 years old as a group, Black Sabbath, we can juxtapose that with the very youngest and most cutting edge music, that is dance music, and a fellow like Avicii who is 21 or 22 years old. To me what it does is it shows that all people from around the world, all ages, all nationalities will come together when it comes to music.

Being in a band that reunited, do you have any advice for At the Drive-In?
Well, being a fellow that has a group that is 25 years old, if I have any regrets about Jane’s Addiction it would be that I screwed up and thought I was too big for the band and left them. And it’s taken me 25 years to catch up and make things right again. So, if I were At the Drive-In I would make it stick this time, fellas, because it sure hurts missing your friends that help make your career.