As Metric’s Emily Haines wrote in a letter to fans in late February, the band’s June 12 album Synthetica, “is about forcing yourself to confront what you see in the mirror when you finally stand still long enough to catch a reflection. Synthetica is about being able to identify the original in a long line of reproductions. It’s about what is real vs what is artificial.” 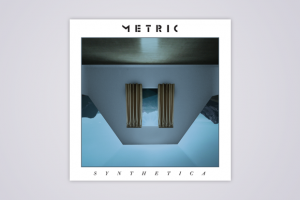 Now that the band has revealed the artwork for the disc, fans can see how far that creative thread runs throughout the album, the band’s fifth full-length studio release. “We wanted the artwork for Synthetica to be thought provoking and a little disorienting, an optical illusion which asks you to stop for a moment and consider what you are looking at,” Haines said in a statement, noting the band was inspired by the ’60s Radical architecture movement. Photographer/designer Justin Broadbent, who created the topsy-turvy image the band picked up for the cover, adds, “I like looking into things that are looking into things. I tried to create a beautiful landscape that doesn’t sit comfortably with the viewer. We are disoriented among the clouds, flipped in a room without walls. There is a synthetic perfection to the gold curtains. Like fresh lipstick, precious but temporary. Everything else is a mirror.”

The band’s official website has likewise been transformed into a reflecting pool of sorts, now hosting a dozen short video clips of eerie surveillance camera footage that seems to have been shot while the band was in the studio recording Synthetica. Each brief video is soundtracked by an ominous, wordless bit of synth music that appears to offer previews of the disc. Haines has said the album “sounds like the culmination of everything we have done. We’ve always had a sound in our heads that we hoped to realize and we finally heard it coming back out of the speakers this time.” First single “Youth Without Youth,” which the band promises is built on a booming Gary Glitter beat, is due May 1 via digital retailers. The band will be on the road starting in late May.