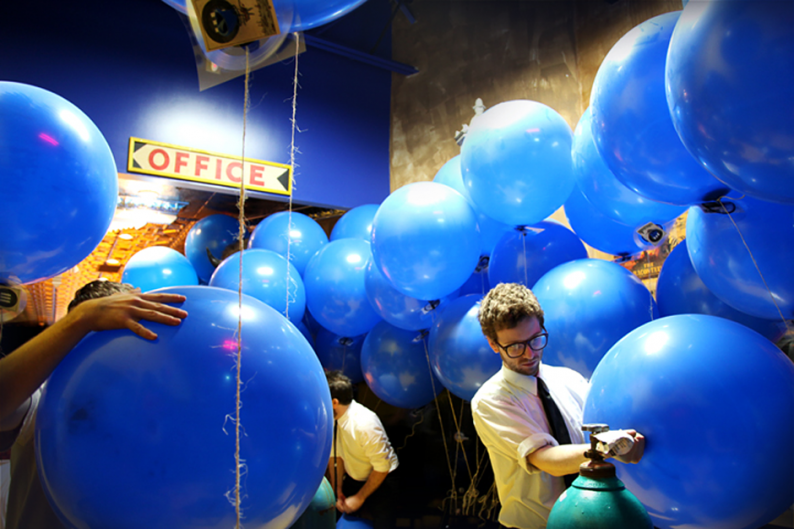 Jack White is well into his Willy Wonka phase, and that’s great news for everybody. Right after releasing the world’s first 3 RPM single (that’s right, three), the former White Stripes frontman’s Third Man Records has found an equally unconventional way to premiere a track from his upcoming solo album. It wasn’t an April Fool’s joke, but yesterday the label sent 1,000 flexi discs containing previously unreleased Blunderbuss cut “Freedom at 21″ into the air attached to helium balloons, as you can see in the video below. The launch took place from the label’s Nashville headquarters.

According to Third Man, the balloons include postcards instructing their lucky finders on how to submit photos and information on where and when they discovered the record. All of those details will end up online. But let’s not get too carried away: The label points to statistics showing a roughly 10 percent recovery rate for similar balloon launches. In other words, there’s a good chance that fewer than 100 of the 1,000 records will ever be found. Oh, the humanity!

Blunderbuss will be out on April 24 via Third Man and Columbia. Third Man also has plenty of releases planned for Record Store Day three days earlier, including a 12″ of Jack White’s “Sixteen Saltines,” which the label bill’s as the world’s first playable etched record (a limited-edition version is pressed on liquid-filled vinyl, again probably a first); the label is also releasing a new Karen Elson single featuring a cover of Jackson C. Frank’s “Milk and Honey,” a red vinyl edition of the White Stripes’ “Hand Springs” backed with “Red Death at 6:14,” and Jerry Lee Lewis’ self-explanatory Live at Third Man CD/LP. Who can take the sunlight, sprinkle it with dew, cover it with chocolate and a miracle or two? Jack White can.