fun.’s Nate Ruess on Why Weezer Are Great (and Like Fleetwood Mac)

Singer shares his biggest inspirations, from Queen to Kanye 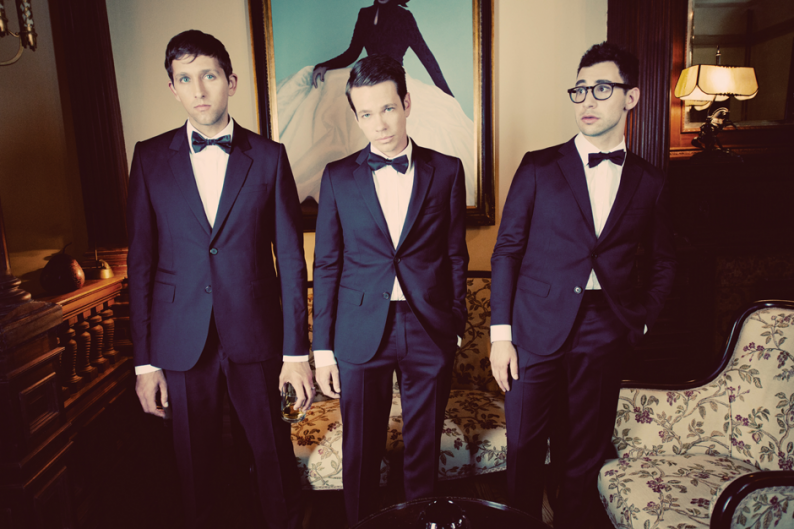 Fortunately for the purposes of this interview, Nate Ruess seriously loves talking about his influences. “I could go for ages,” fun.’s frontman tells SPIN. “It’s the coolest part about writing music. I don’t know how other people work, but so much is derived from some amalgamation of all these different songs that I love. That’s why they jump all over the place.” The indie-pop band’s dramatic hit “We Are Young” (off Some Nights) has done its own impressive leaping recently, finding its way to No. 1 on Billboard’s Hot 100 three months after its first release. The onetime singer for the Format limited himself to non-Beatles albums and geeked out on the greats with us:

Van Morrison
“Van Morrison is probably, at this point in time, my biggest influence as a vocalist. When we were making our last album I had a vinyl copy of Veedon Fleece in the vocal booth in front of me, in the dorky sense. I think there were candles around, which is really tacky, but hey, I needed to channel Van the Man! He inspires me to want to be different as a vocalist, or find my own voice, so to speak. He really does make you want to sing and to do it well and not worry so much about how good your pitch is or anything like that — just to have an inspired vocal.”

Queen
“I bought A Night at the Opera on vinyl and listened to it that morning and was supposed to go do something. I just canceled everything and spent the whole day listening to it. Such a huge, inherent influence on our music. We don’t set out and say, ‘How do we make a song sound like a Queen song?’ I don’t want to sound like Freddie Mercury. But somehow there’s something very theatrical about what we do, and we can’t even put a finger on it. I think a lot of it has to do with the fact that I write songs in my head and transfer them. I don’t really play instruments, so I don’t follow a tempo, and it ends up becoming a story that’s more woven, and I guess that makes it theatrical. Yeah, we like to rip off some of the Queen harmonies occasionally. They still sound cooler than any other harmonies. We’ve had 20 people be like, ‘This is how you record a Queen harmony.’ None of it ever sounds like a Queen harmony. It’s like some crazy recipe. The Queen and ELO harmonies are so distinct and fit in our songs so well sometimes, but we don’t know how to do them properly.”

Paul Simon’s Graceland
“My dad just wouldn’t shut it off. Graceland and Cat Stevens were on in the house all the time. I listen to Paul Simon’s lyrics all the time and could never amount to what he does. I’m always singing about myself, but it seems like Paul Simon can sing about real problems — and it doesn’t have to be a cause that someone knows about — and they can find a way to make it about them. That’s why I wanted to get into music.”

Smashing Pumpkins
“When I was a freshman in high school, Smashing Pumpkins’ Mellon Collie and the Infinite Sadness had been out for a year or two, but there was one song I put on repeat all winter. I was longing for this girl and I’d listen to it over and over again, and be like, that’s it. I was so inspired by that feeling, and feeling if I can make music and someone else has that winter song to lament someone about, yeah, this is a cool job, I want to do that.”

Weezer’s Pinkerton
“My dad dragged me to a Bruce Springsteen concert as a kid. It was my first concert, but I fell asleep in the middle. My second concert was Weezer on the Pinkerton tour, and Pinkerton is the reason why I’m doing this. I never feel like I fit in anywhere and I discovered Pinkerton, and that is just an album about feeling like you don’t belong. My freshman year, I get to high school and everyone fits in these tight-knit groups. I don’t belong to anyone, and I go see Weezer and everybody was me. ‘El Scorcho’ to this day is my favorite song of all time. That made me think, OK, I’m going to be in a band, because I can find other people that don’t fit in the same way I do.”

Fleetwood Mac’s Tusk
“There’s nothing I love more than a band that has found something, does something incredible with it, and because they’re self-destructive, decide they want to go in a completely different direction and trash up the whole entire thing. I heard Pinkerton before I heard Tusk, and Tusk just reminded me of that. Those, non-Beatles album wise, are my two favorite albums of all time. I was 24, 25 and in a band, and in between anything I’d just go back to my bunk on the bus and put it on. It’s one of those moments where creative minds have a brilliant idea and it doesn’t fall in line with what made them successful, but they go for it anyway. They ignore success to be artists, and I guess that’s why both of those albums appeal to me. Even in relation to Some Nights, a lot of the hip-hop today was a massive inspiration for that album. I felt like I was a little too retro. I was living in a time that I wasn’t really living in, so I decided to open up my ears to the music around me and not be such a tool, and it was hip-hop.”

Kanye West’s My Beautiful Dark Twisted Fantasy
“I was like, oh my gosh, if Kanye West can borrow these horns and theatrical elements that we already have in our music — what’s this thing he’s playing, what are these sounds? Because they sound so incredible! It sounds like the future. So I was thinking, what if Elton John and Kanye West were around in the same genre at their peak. I’m sure they’d be completely influenced by one another. Suddenly I was inspired and I fell into it hard.”

About That Time Bleachers’ Jack Antonoff Was Punched By a Clown