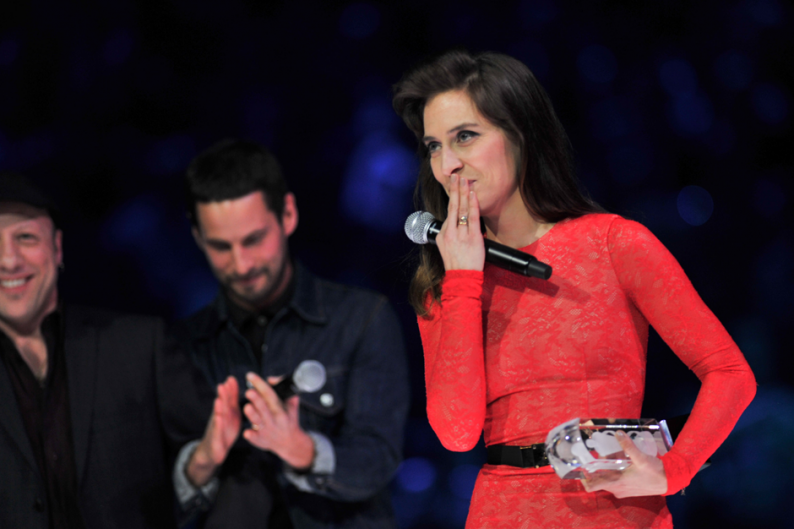 The 2012 installment of Canada’s Juno Awards might have been riddled with Great White North stereotypes — Nickelback opened last night’s show, which took place in a hockey arena in the country’s capital city and featured a pre-taped message from an absent Justin Bieber ૼ but not resembling the Grammys may not be such a bad thing.

“I’m just in shock,” Feist told the Canadian Broadcast Corporation afterwards. “All I can do is express genuine gratitude… I’m very proud and very grateful for my inner sanctum.”

Other big wins at the William Shatner-hosted event: Michael Bublé took home album of the year for Christmas, J Biebz won fan choice (for which he thanked his legion of Twitter Beliebers), and singer/songwriter Dallas Green, better known as City and Colour, scooped up songwriter of the year for Fragile Bird, Weightless, We Found Each Other. Drake won Rap Recording of the Year for Take Care, reminding us he is indeed Canadian. (Full winners’ list here.)

French DJ Martin Solveig and Toronto electro-pop act Dragonette stole the title for best dance recording away from masked Canuck dance hero Deadmau5, who won the category three years in a row. If there were any hard feelings, he hid it well behind that giant mouse head to close the show with a performance of “Raise Your Weapons” with Toronto pop singer Lights. See it — along with thousands of swaying glow stick mouse ears: