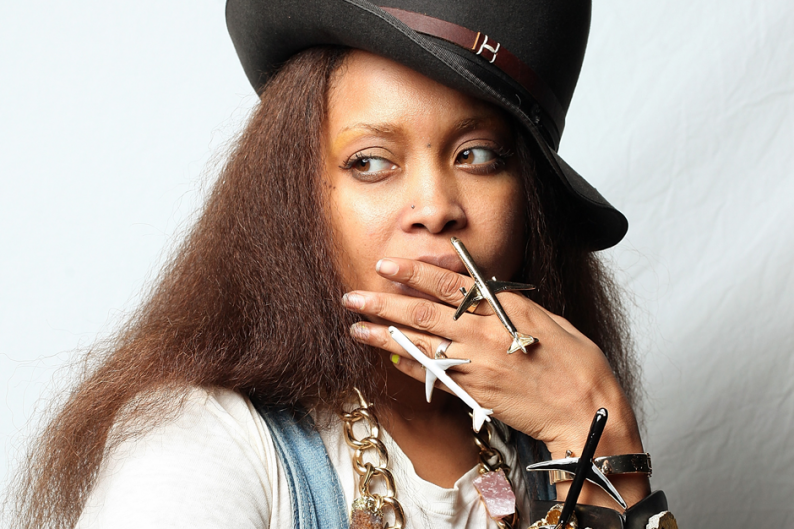 Erykah Badu, one of the wittiest and most adventurous artists working under the umbrella of contemporary R&B, has teamed up with liquor brand Hennessy for its new Wild Rabbit product. She’s in good company, as Martin Scorsese and boxer Manny Pacquiao are also taking part in the campaign, loosely focused on chasing dreams and achieving success. When offered the opportunity to sit down with Erykah Badu, you take it… no matter what.

In the cozy library of New York’s swank Soho House hotel, a group of journalists were fed bottomless drinks and appetizers as we waited for Badu. Hours late, but apologetic upon arrival, she screened her print ad’s behind-the-scenes video and then retired behind a screen where she’d talk to people individually. She’d already been cagey about what to expect from her upcoming sixth studio album (due in summer), so SPIN discussed her strange public relationship with substances and still stranger business model.

You mentioned that this is somewhat creatively fulfilling for you.
Mmmhmmm.

That’s kind of unexpected for an ad campaign, right?
Well, I call it corporate reparations. A lot of times in art, we have an opportunity to express ourselves, especially when you come across a company that’s 250 years old, but the oldest person in the artistic part is 29 years old. You do get an opportunity to grow and they allow us the freedom, the space to create.

Why not?
It’s not my thing. I don’t really need it.

You have an interesting relationship with substances. Weed, in particular, is referenced throughout your work. Your band is called the Cannabinoids. But on the record, you say you don’t smoke…
I don’t. I used to, when I was younger — in college and everything. I know the medicinal benefits. I have many friends that have dispensaries in Los Angeles. I support them. I have a couple of relatives, one who has Crohn’s disease, whose only remedy for pain is medicinal marijuana. I think it’s a very natural herb. And I’m an herbalist. I grow herbs.

So you’re not a teetotaler.
A what?

You’re not anti-, per se.
No, I’m not anti-. Whatever medicine you need. As an herbalist, being able to see the herbs grow and see what they do and know which parts of the roots to use, that’s my relationship with it as well. I don’t grow marijuana, though! No.

I read an interview in Culture, in which you seemed a little concerned with alcohol abuse. Did you have to do any moral negotiating when you signed on with Hennessy?
No. Whenever I sign on to anything, I just follow my heart, basically. I know at the time it’s probably something I need to do for my brand and my career. And people do what they want. I hope they do it responsibly. That’s my main thing. People are going to drink. People are going to enjoy themselves and have cocktails and whatever they’re going to do. But I hope they’re going to do it responsibly. And I like that a company like Hennessy deals with real issues in the community. Like arts in the community. Younger people don’t have an opportunity to see Manny Pacquiao in this life. Or Erykah Badu. I mean, a lot of people don’t know who the hell I am. Or know Martin [Scorsese]’s work. It’s a good branding opportunity. It’s a good mix. This platform will help push their message and we happen to have the same one.

The music industry is tough. What fascinates me about your career is that your music has become less conventional as the music industry has increasingly crumbled. You’re making a steep hill steeper. Do you notice this?
Of course I do. I stopped counting. I don’t even look anymore. The only thing I can liken it to is: Somebody invented a flying car. And there are only about 25 of them. The world hasn’t had time to adjust yet. There are no sky signs, and stop signs. Those few people who are flying around in the air basically have a power. I think those people are the people who are unafraid to change and grow and move and accept what’s going on and keep pushing themselves.

It would be great if you did.
I need to.

When I saw you a few years ago at Roseland, you started with a 20-minute jam session, and then went into the 10-minute suite “Out of Mind Just in Time” and then you did “20 Feet Tall.” You don’t make things easy for people. There was no working yourself in. You kicked off with difficult material.
When I perform, it’s therapy for me. I never underestimate the audience’s ability to feel it. There’s something for everybody. But it’s… I need that. That sequence you gave? Apparently that night, I needed that.

Is your upcoming cover of “The First Time Ever I Saw Your Face” with the Flaming Lips a bid to reclaim that song from those miserable ASPCA commercials?
Honestly, Wayne [Coyne] drove to Dallas from Oklahoma — we live an hour apart. He said, “We’re on our way, meet me at the studio, we’re getting ready to do some shit.” I get to the studio, he plays the song and he was like, “This is gonna be our rendition of ‘First Time.'” I asked no questions. I do whatever Wayne says.

Are you aware that Kids’ Lives, a VHS that you appeared in pre-Baduizm, has made a viral comeback?
Yes! I started it. It’s funny. They just took parts of it…

…Everything is Terrible. That’s a good site, you should check out their other stuff.
I look at it all the time! That’s my site. It’s up there with Tim and Eric for me.

You should work with them.
I talk to Eric all the time. On the phone. That’s my buddy. What we have in common is I used to be a comedy writer. We talk about that a lot.

Were you affected by the death of Whitney Houston?
Yeah. I feel like I had a personal relationship with her, just from growing up with the music. “You Good Give Love,” that whole album. I was one of those kids in the mirror, one of those kids saying, “I’m Whitney Houston,” and singing. I didn’t know how much it affected me until I heard the news. When I heard that, my heart just dropped. It’s too soon to say, really, how I feel. I try not to think about it.

When I look at you, I see a master at work. Especially in R&B, it’s amazing that you do what you do on the platform that you have. A lot of people are too cowardly to go where you go…
Well, I’m glad R&B let me use their platform. I don’t know what my music is, but if it fits there, fine. I’m just gonna do it from my heart.

Well, keep on keeping on.
I will. You are so handsome.

And you are beautiful… [Stammering] That, that makes my year so far.
You know you’re cute.

I don’t know anything.
Stop playin’.