Noise-rap eye-gougers Death Grips are brash, anarchic, punk-borne, distortion-splattered, puke-makingly noisy… and now they’re labelmates with Shakira! A toxic waste accident of Rubin-ready loud-rap and no wave textures, Death Grips made a big enough splash with 2011’s Ex-Military mixtape to get called up to the big leagues, signing with Epic Records — possibly the most unlikely major-label signing since outsider music pop genius Daniel Johnston inked with Atlantic almost 20 years ago. They’ve got two albums due in 2012, and the first, The Money Store (out April 24) proves that building with the guy who signed Usher wouldn’t soften their edge one bit. The album is 13 balled fists of nicotine-fit drumming, wubbly bass bombs, molasses-thick reverb, and throat-shredding screams. SPIN talked to drummer/co-producer Zach Hill (formerly of noise-punk spazzes Hella) on being the art-rap vanguards storming the system.

What are you up to today?
Death Grips. Pretty much that’s all I’m doing right now.

There was a time when you’d call up Zach Hill and he’d be working on 70 different projects.
Yeah, it’s kind of a big life change. I’m learning how to say no all the time. It’s hard to do. It’s crazy. Even though I love all my musical relationships and had so many good times doing things with so many people, I was working towards narrowing down. Something I could put all of my energy into. So now I have to just say no. I’ve had to temporarily exit out of the Boredoms for a minute. Actually just the other day Devendra Banhart asked me to play drums for some stuff.

It wasn’t that long ago since Hella put out their last record…
I was finishing that record as this band was starting. We haven’t toured since 2007. Things change. Spencer has a family, he’s married. He’s having a baby this year. I grew out of that, in a sense, in a lot of ways. It’s always kind of a strange thing for me, just being this “technical drummer” in a “technical band,” but it’s like that’s not even the kind of music I listen to, to be honest. It never has been. I’ve always been like, ‘Man I need to start making music that is closer to what my interest is, closer to what I listen to.” So now I’m doing that. 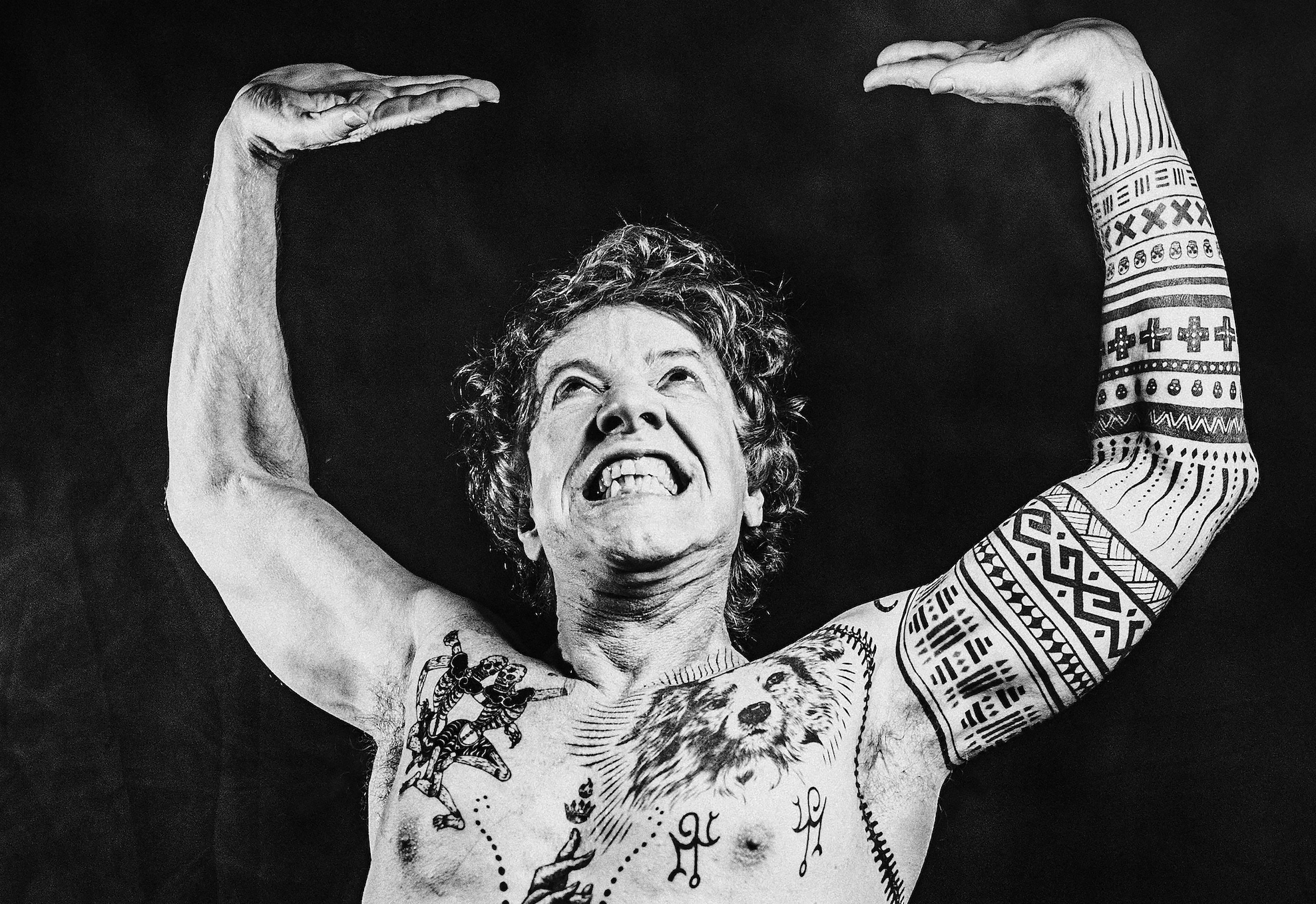 How did you hook up with the other two Death Grips guys?
Andy [Morin, producer] and I knew each other because he helped me record the album Face Tat that I made a couple years back. He also recorded the Wavves record I made with Nate that never came out… Stefon [Burnett], the singer and I lived on the same street for like four years. We always talked about playing music for a long time because we’d hang out all the time. All of a sudden we started making what we had kind of hallucinated for the last couple of years. As far as the things that have been happening, you know, we really didn’t have those expectations. We still don’t have any expectations, to be honest.

What was the experience like for you?
Pretty incredible actually. And shocking. I’ve been playing music a long time and so I’m very familiar with, “Don’t believe anything until it’s actually happening.” We just went down there and we took it with a grain… like we showed up laughing. Not in a pretentious way, but just having no expectations. Stefon went straight into the bathroom and literally just ripped it, like graffiti, like tore into the stalls, carving DEATH GRIPS all over the stalls of the brand new Sony offices. That was before we even got in the spot.

These people were legit amazing, I mean L.A., Tricky Stewart is really involved in the group. None of those people are involved in the making of the music, FYI. The energy was like the best we’d experienced in every meeting we had had up to that point. We listened the earliest form of the Money Store with them. They believed in it. Honestly, they didn’t want us to leave the building. It was a trip. It was like a mind warp. To be frank too, I was like stoned out of mind. We went in there, I was high as fuck. At one point the gum fell out of my mouth.

Is there some next step that you’re dying to take? Or some crazy vision you might want to realize with a major label’s help?
I think it’s more about travel. We know we want to work on some stuff in China, I’ll tell you that. And as far as collaborations, we have ideas, there are directors we’d love to work with and nothing solid is coming from that at this point necessarily. We want to work with Chris Cunningham, I’ll say that… We want to hook up with some video stuff with Crispin Glover. The River’s Edge was filmed in Sacramento, there’s a connection there so. I’m a fan of his work.

Was it hard to make this record without samples? The first record was stacked with them.
No, it wasn’t really that difficult. Honestly sometimes sampling is even harder because you’re using the magic from something. I think it’s hard to sample a really good song and making something new out of it. In some ways not thinking about that frees some things up.

Did you have to cut samples from the record?
There was only one song. There’s one song and we’ll probably release it some time this summer. We sampled a Geto Boys song.

Which song?
“Fuck ‘Em.” The songs totally exists. We’re just working on getting it cleared. And we just figured, we wanted to get these two records out this year. The record stood strong enough without the track, even though the track fucking bangs. We had no samples on the stuff we played to the label. They were like very much connecting with it, feeling it. Like I said they wouldn’t let us leave the building. I guess the only other time they said L.A. did that was Rihanna…

Maybe you guys are going to be the next Rihanna.
Maybe. That’d be interesting. We’ll be in some coconut water ads and shit.

Have you hung out with any of your incredibly famous labelmates yet?
If you wanna know a funny story, Simon Cowell’s the one who printed out our contract.

For real?
Dead serious dude. The printer in the office was broken and they’re like, “Let’s go use Simon Cowell’s.” He was the last one in the office, so we used his shit. He printed it out and we signed the shit.