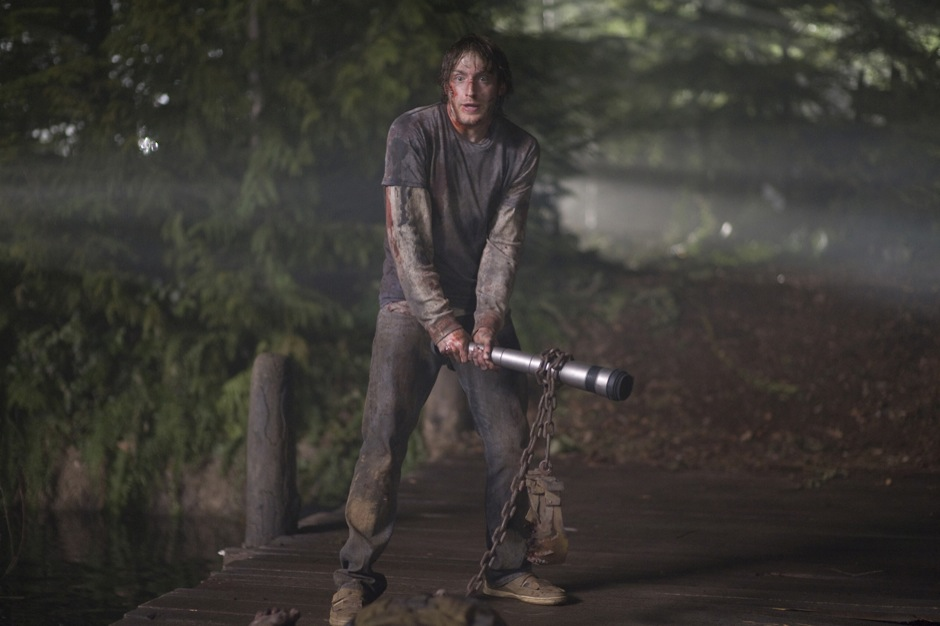 If you missed Cabin in the Woods last weekend, well, that’s unfortunate. Everything might have already been spoiled for you, and if it wasn’t, it’s about to be. Seriously. From this point on. Stop reading if you still plan on seeing it. SPIN spoke to former Dollhouse costar Fran Kranz, who reunited with Buffy creator/Cabin producer Joss Whedon to play Marty, the stoner-hero, although knowing he’s the hero means knowing that he does not in fact die halfway through the movie, as it would appear. (Don’t say we didn’t warn you.)

Is it frustrating to be the hero when nobody can know?
When I read the script and saw what happens to me halfway through, I was totally satisfied with the part, like, “Oh man, I’m the stoner, this is great, he’s hilarious. I’m sure he’s gonna die first or second.” And so to get the borrowed time was a bonus. It’s kinda cool because it’s not necessarily like an M. Night Shyamalan movie where there’s one twist that could ruin the movie. Or, like, I tell you who Keyser Soze is. You could find out what happens with me or you could find out certain aspects of the movie and I think it still wouldn’t be ruined. If anything, it would become more intriguing. When I try and explain the movie to people, I have trouble or they have trouble because it just sounds insane.

Did you have anyone in mind to help you figure out how to play a good stoner, or did that just come naturally?
Ha. I thought of James Franco in Pineapple Express and Brad Pitt in True Romance. I thought about my ex-girlfriend. Obviously I did try to make him my own. Like, my favorite Friday the 13th was number four, with Corey Feldman, even though he was a kid. And Corey Feldman in The ‘Burbs. I can’t remember if he was explicitly stoned in that movie…

But it’s Corey Feldman.
Yeah, he probably was.

So given how important the twists are here, how much were you told about the script when you auditioned?
I was told very little. I was told nothing. We had fake sides — sides are what they call sheets of paper from the script that you get for an audition. The monologue that I was given was really painful to do because it was ridiculous. My character was being interrogated by detectives after I witnessed my friend get his head chopped off by the Clickety-Clack Man in the parking lot of a bowling alley. He was slightly disturbed and he seemed a little high so obviously he freaked out and was giggly. And at the end, I had to deliver the line, “The Clickety-Clack Man is coming. He’s coming for us all.” It was really embarrassing, and I was really upset with Joss. But Marty is wacky, he’s the conspiracy theorist and, being high for most the movie, he is a little unhinged. I think they wanted to make sure they had an actor that could just get into the silliness.

Can we talk about the whiteboard of potential monsters for a minute? I wasn’t able to read them all, but there were some great ones.
Oh yeah, and [Director]Drew [Goddard] had all this back story for all the monsters, like, “Robot Scorpion isn’t evil, he actually loves human beings, but he cuts them in half when he tries to hug them.” Then there’s one entry that just says, “Kevin,” which is hysterical and, like, perhaps the most terrifying, we’ll never know.

Do you have any memorable stories from the set?
Drew is so passionate about horror films, and I just remember this one time, you know, we had some zombies eating intestines and he yelled “Cut!” and he was just like, “No, no, no. This is how it’s done.” And he got down and started eating the intestines and showing them how a zombie does it and getting covered in blood and gore. And there was another time we were filming in the woods and I actually ran into a bear. It was the lunch break so I went for a run through the woods, and it was surreal because my first reaction was, “Oh, it’s a movie bear! What are you doing here? You got to go back to base camp.”

When MGM filed for bankruptcy, it held up the release date so this sat on the shelf for more than a year. Were you nervous about its prospects?
Yeah, I always had faith that the movie was awesome but there were times when I was like the senile member of the family. People were like, “It’s time for Franz’s nap. He’s talking about Cabin in the Woods again.” People didn’t believe that this was ever coming out. But deep down I never lost the faith.

You’d think everything Joss Whedon had a hand in would be magic, but that guy has some bad luck (Dollhouse, Firefly)?
Um, yeah you know, that’s funny. But he has a really good sense of humor about it. I feel like he sort of expects shows to be canceled. Obviously he doesn’t want them to be. But you can be confident when you do a Joss Whedon project that your character’s going to take a turn that you didn’t expect. People want to work with him. If I meet someone that’s worked with Joss, I just immediately assume I’m going to like the person because he picks and chooses very well and people come back to him. I want to work with him my whole life.

You can be like the DiCaprio to his Scorsese?
Yeah, yeah. Or I could just be DiCaprio. I’ll take that too.