A guided tour (and first listen!) to the art-punkers' latest LP 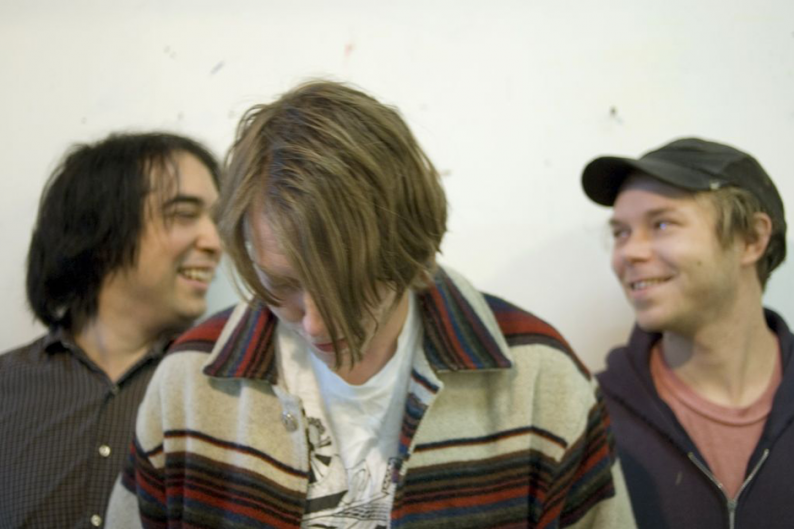 “At age 15, is it possible for a bunch of kids to actually get introduced to this band?” Black Dice’s Bjorn Copeland says that question led his often polarizing New York-based art-punk outliers (together now for 15 years!) to title their latest full-length Mr. Impossible. Out next week by way of new label home, Ribbon Music, it’s as close to a straight-ahead pop record as the trio’s produced to date, an effort Copeland thinks could present a more “logical starting point” for new listeners. Below, hear the album in its frantic, frizzled entirety, and check out Copeland’s breakdown of each track.

:audio=1: “Pinball Wizard”
We ended up sort of working this song out in homage to our landlord at the practice space who basically let us slide on rent for two years. He was a super big pinball fan, so that was the idea behind that one. A lot of the tracks are written based off of pretty simple beats that were constructed from taking snippets off of this old crappy keyboard that we found in the trash. Then we took little bits of it to make new beats. It was one of the first ones that we started, but the last one to actually finish. [Our landlord] is in Thailand right now, so I don’t know if he’s actually heard it or not. We’re letting him do what he needs to do down there. In an effort to stay on his good graces we definitely let him know we named the song in honor of him to say thank you for being so lenient with us for so many years. Maybe he’s playing poker or something like that.

“Rodriguez”
[“Rodriguez”] actually was probably the first one we finished for the album. Eric [Copeland]’s wife is Spanish. She’s from Madrid and she basically told us about this Spanish character—I’m not even sure if it’s a film character or a TV character—who basically lives like shit as soon as his lady leaves town. He just eats tons of crap and drinks too much, so I guess when your lady or partner leaves town, and you regress in your lifestyle, it’s called a Rodriguez, so I don’t know we thought it was kind of funny. Last summer my wife was starting her first year of her master’s degree up at Bard so it was a whole summer long Rodriguez basically. So It was sort of an inside joke on that. A lot of the titles seem to be inside jokes about life changes that have happened over the last couple years. Everyone was having a Rodriguez.

“The Jacker”
For this record our schedules had changed kind of considerably. Aaron and his wife just gave birth to a daughter right when we started working on the record. Eric was in Madrid and in Morocco for a while so a lot of them started with me poking around in the practice space. I’d usually filter some sort of a simple loop to play along with so that I could actually kind of come up with guitar parts for it, a little bit different than the way we’ve worked in the past, but actually a little bit more like the way we worked in the very beginning. This is actually one of the more fun ones to play live. I think when we started working on this record we were trying to really remember all of the different things that had been fun over the years about playing. What types of things were the most gratifying to play. For many years it was like everything was at 10 and there wasn’t even a point in sound checking because you knew all that you were going to do was turn everything up to 10 anyway and just play it as hard as you could. In some ways [“The Jacker”] was like an old song in that respect. It’s heavy and unrelenting in some ways. The new stuff has more of a groove to it than the first stuff we made over the first couple years of our life, but in some ways the song felt like playing an old song, which was nice for us.

“Pigs”
Eric might have hashed out a lot of the main structure of it himself. He’s definitely in the practice space at least once a day, if not a couple of times. He’s usually down there for the bulk of the day working on stuff, whether it’s his solo stuff or working on Dice things, but “Pigs” was the first track that he brought in for this record. He had hashed out a bunch of the changes and for me, it’s the simplest part I’ve ever had. It’s like one note pretty much the entire time, whether it’s officially a police reference or not is debatable. With a lot of this stuff, the titles tend to be on the cheeky side. Or they’ll be reference to something we’re chatting about for two seconds then all of a sudden the title sticks. It’s was a fun song to play just because in a lot of ways, like a lot of the tracks on this record , it’s more straight forward in some respects. They still might sound pretty bizarre to some people, but it they stop and really pay attention like the way that everything’s structured its not that dissimilar from the normal crap you hear on the radio. Out of all the songs on the record maybe it’s catchy in a certain type of way. It’s not overly super, super aggressive.

“Spy vs. Spy”
Eric was a huge Mad Magazine fan as a kid. We still have all of them sitting at our mom’s house, and obviously the title is a mad magazine reference to that comic strip. It has a pretty straight-ahead sort of swing to it and those aren’t always things that we get to, that we’ve got to play around with in the past. For us to do things that are borderline normal or more straight-ahead is actually kind of weird . Maybe it doesn’t sound as weird to other people, but I think “Spy vs. Spy” is one of the first songs where we actually tried to have a break in the song and have it work successfully live. Sometimes it can be tricky to actually make those big moments that happen on a record where everything drops out except for the guitar, but for some reason the way we started writing these tracks, that seemed like the first one where was a high success rate of doing it live as opposed to not working out. That was a high point for the band to be able to play that song live.

“Outer Body Drifter”
I mentioned trying to remember what it was that got you excited about music when you first started. Like what were the things that would make you drive 6 hours to go see a band that sold 100 7” in total? I felt like a lot of the music that we revisited, or at least that I listened to a lot while we were working on this record was sort of stuff that seemed like it had a playfulness to it. I was thinking about old Ween records or Butthole Surfers or the Meat Puppets or Camper van Beethoven, these bands that were more ’90s-centric that had that made strange, psychedelic records that were also kind of a playful. It was more about spitting out ideas than it was about making a record that was going to sell X amount. With this one, I kind of directed us slightly to more celebratory sounding songs, for us at least. This is an upbeat record and “Outer Body Drifter” is probably as close as we’ve come to writing a normal pop song in some respects. It was nice to try and it has a little bit more pomp to it than our other stuff. It’s just one sort of big groove to it.

“Shit House Drifter”
This is a joke about being in the dog house at home for doing too much band stuff. “Outer Body Drifter” Aaron came up with it was just a dope reference, but with this one the joke was that I drift in and out of the dog house, or that all of us drift in and out of the doghouse. But again that’s sort of an inside joke at the expense of our ladies. We’re all incredibly lucky that we all have people in our life who actually support what we do. That was sort of the joke. I got married this year, my brother got married this year, and Aaron’s been married for a few years. A lot of this record kind about about as there’s a lot of life changes and all of a sudden different factors affect the schedule. How long we can go out? How long we can practice for? All great things, but that was definitely written in a crappy moment when I felt like I was in trouble at home. Luckily, that has subsided.

Carnitas”
This was actually the only one we kind of wrote in the studio for the most part. Eric had worked out a lot of it. It’s definitely a different vibe than we had done in the past. I don’t really recall another track that sounds like that for us. And also that might be one of the first things that has keyboards on it. I know that for years at least there’s been reviews talking about us using computers and synthesizers and drum machines and all that stuff and realistically we never really used any of that. Except for this crappy Yamaha thing someone left in our practice space. It’s basically what kids practiced piano on in the 80s. It has tons and tons of pretty cheap sounds on it, but for the most part we’ve never used anything like that before. All the parts weren’t made by necessarily processing the hell out of something. So “Carnitas” is definitely the sound of Eric exploiting the hell out of this sound piece of junk keyboard that we had that will probably never ever see the light of day. The title is reference to him being vegetarian and having to go to Spain and feel embarrassed in front of his in-laws every time his wife had to explain that he didn’t eat meat. More Spanish culture comes into play.

“Brunswick Sludge”
This one was based on a dream actually, which sounds silly. Eric and I grew up in Brunswick, Maine and Aaron spent his high school years on the front range of Colorado in Fort Collins. I had some dream that the two were basically listed as a reggae, or more of like a dub mash-up. I think it was a vague reference to how some of us spent our time in high school. I don’t think it was actually a title we would’ve used if it hadn’t actually been dreamt up. The fact that it came in a ridiculous, disjointed dream seemed like it made enough sense to use it. Bsically it’s just a little nod to both of the places where Eric and myself and Aaron all sort of really got into music. Again, this might be one of the only tracks in 11 years where the guitar doesn’t have any effect on it really, which again is so strange for us and it’s super normal for most people, but we sort of approach everything a little bit differently.

Hear Black Dice Brilliantly Remix Doldrums’ ‘She Is the Wave’